Jarrod Bowen and James Justin have been handed their first call-ups to the England squad ahead of next month's Nations League matches.

Bowen is included for the first time after scoring 18 goals and assisting another 13 as he helped West Ham to seventh in the Premier League and the Europa League semi-finals, while Justin is named after returning from a serious knee injury to feature regularly for Leicester in 2022.

The 24-year-old can play on either side of the defence, with his versatility likely to be a useful asset in a squad featuring no left-backs.

Bowen and Justin are two of a number of players picked by Gareth Southgate for the fixtures against Hungary, Germany and Italy who were not in the most recent squad in March.

Trent Alexander-Arnold, Reece James, Kieran Trippier and Kyle Walker all return, meaning there are five right-backs in the squad.

Fikayo Tomori has been recalled after winning the Serie A title with AC Milan, while Tammy Abraham is also included after helping Roma to Wednesday's Europa Conference League final.

John Stones, Aaron Ramsdale, Kalvin Phillips and Bukayo Saka also return after not featuring in the wins over Switzerland and Ivory Coast two months ago.

There is no place in the squad for Liverpool captain Jordan Henderson, who has been playing regularly for the club and is preparing for Saturday's Champions League final against Real Madrid.

Aston Villa duo Tyrone Mings and Ollie Watkins have also been left out, as has Emile Smith Rowe. Luke Shaw fails to make the squad after missing the end of the season through injury.

Tyrick Mitchell and Kyle Walker-Peters have not retained their places after making their senior international debuts in March, while Fraser Forster, who was handed his first England call-up for five years in the previous international break, is also left out.

Marc Guehi, who also made his debut in March, is retained, as is midfielder Conor Gallagher, who impressed alongside the centre-back for Crystal Palace this season.

Marcus Rashford and Jadon Sancho have missed out following Manchester United's poor season. It is the third squad in a row that Sancho has not been a part of, while Rashford has clearly not done enough to impress Southgate, who admitted the forward was "not at his best" following his omission in March.

There are also no places for Eric Dier or James Maddison, desperate strong ends to the season with Tottenham and Leicester, respectively.

Ben Chilwell has not been recalled following his return from a serious knee injury, meaning there are no left-backs in the 27-man squad.

England will play four Nations League fixtures next month, starting with a trip to Budapest to play Hungary on June 4. Southgate's squad will then travel to Munich to play Germany on June 7, before hosting Italy on June 11 and Hungary on June 14, with both matches taking place at Molineux. 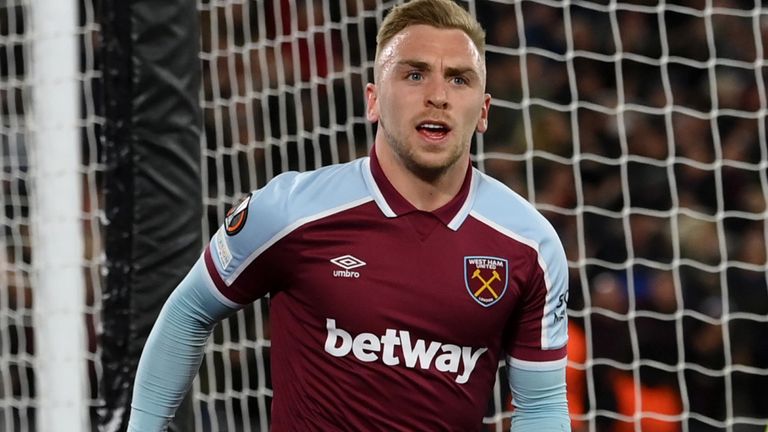 Gareth Southgate said Jarrod Bowen's inclusion in his latest England squad was "thoroughly deserved", and highlighted the 25-year-old's route to West Ham via Hereford and Hull.

Asked what Bowen would bring to the team, Southgate said: "Consistently strong performances. We were certainly thinking about involving him in March before he got injured. He's a goal threat, he's direct.

"His journey is really interesting in terms of the experiences he's had - it's a reminder that you don't just have to be at an elite academy and come through that pathway. Playing in the lower divisions and to have that experience is a great route to go.

"He works incredibly hard for the team, which we want all our forward players to do. He's thoroughly deserved his call up."

Southgate also explained his decision to include Tomori over Mings, saying: "Fikayo has had a very good season with Milan. I talked in March about looking at some of the younger centre-backs coming through, such as Marc Guehi. I think those guys have had very good seasons and, at this moment in time, are ahead of Tyrone.

"Tyrone has always played very well for us. They are always difficult calls because you've got a sense of loyalty to players who have done well, but we have to make opportunities for good young players so we can see them and see what they might be capable of."

Southgate played down his decision to exclude Henderson, saying: "This is also a chance to see a bit more of some players. The decision around Jordan Henderson, who's has 60-plus games this season, is going into a Champions League final, and is 32-years-old, I don't need to know any more about him.

"Everyone else has a week off now while Henderson and Trent [Alexander-Arnold] are still going. Trent will probably be with us for the first part of the camp and then we think that will be enough for him."