Terry Butcher is good-humoured on the subject of the 1986 World Cup, but the smile slips as he recalls that goal by Diego Maradona. "I still feel the injustice now," he says.

"People tell you to let it go, but we felt we could go all the way that year and you still think about what might have been. It was probably the best piece of fraud you will ever see - and he got away with it."

At a sweltering Azteca Stadium in Mexico City, England's hotly-anticipated quarter-final with Argentina was poised at 0-0 when Diego Maradona leapt above Peter Shilton to push Steve Hodge's looping backpass into the net with his left hand.

England defender Terry Fenwick went chasing after referee Ali Bin Nasser in protest, but the Tunisian was unmoved and the goal stood.

"At least half our team didn't see it," recalls Butcher. "Shilts thought he had it because Maradona was so short, but he produced a great leap and obviously made that touch with his hand. We were astounded, our first reaction was just disbelief. How had he outjumped Peter Shilton like that?"

The reality was immediately clear to those watching on television back home, and Sir Bobby Robson's men were still reeling when Maradona followed up his extraordinary moment of audacity with the 'Goal of the Century' a few minutes later. His stunning, slaloming run from inside his own half left England players sprawled in his wake. Butcher was among them.

"It was horrible for me because he beat me not once but twice," he recalls, this time allowing himself a grin.

"I should have brought him down well before that but I didn't do it, the other England players didn't do it, and he was allowed to score that goal. You have to admire it in many respects, but I don't. I always felt that any goal we conceded could have been stopped."

Gary Lineker scored his sixth goal of the tournament as England rallied with the introductions of John Barnes and Chris Waddle from the substitutes' bench, but the 'Hand of God' proved decisive. Argentina claimed the 2-1 victory as revenge for defeat in the Falklands War, while England went home empty-handed.

The defeat still stings thirty years on, but it could have been worse for England - who came close to dropping out of the tournament long before that afternoon at the Azteca. In the group stages, a 1-0 defeat to Portugal and a goalless draw with Morocco had put them on the brink of a disastrous early exit.

"We hadn't scored in two games, Ray Wilkins had been sent off against Morocco and Bryan Robson had aggravated a shoulder injury," says Butcher. "It was a disaster. Thank goodness there wasn't social media or internet back then because we might have had to wave the white flag and surrender. It seemed everything that could go wrong had gone wrong."

England needed a dramatic upturn in fortunes against Poland in their final group game in Monterrey. "We rallied around with Bobby and his assistant Don Howe and made sure we were focused on what we had to do," says Butcher. "The team changed, we did a little bit of work on that, and everybody was determined to do well against Poland." 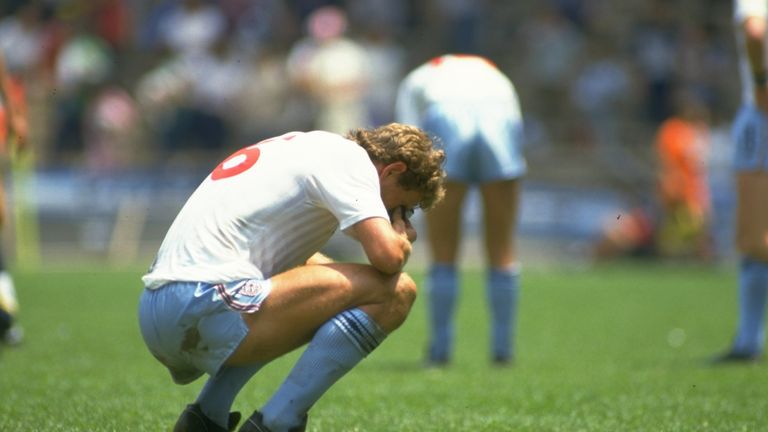 It was probably the best piece of fraud you will ever see - and he got away with it.

England delivered in emphatic style, with Lineker's first-half hat-trick setting up a last-16 tie against Paraguay. "I'd call it a slow-burner but I think the fire had gone out altogether after the second game," says Butcher. "Thankfully we managed to reignite it against Poland. We went from agony to ecstasy in that group."

Paraguay were dispatched by the same 3-0 scoreline thanks to a Lineker double and a goal from Peter Beardsley, and England turned their attention to Maradona and Argentina.

"We felt we could beat them but we had to try and stop Maradona," says Butcher. "We had seen in 1982 how Italy and Brazil had stopped him in the knockout stages. It meant a great deal of physical contact on him. But it's alright saying you're going to kick him, you have to actually get near him to do that. Four years on from '82, he was a far better player, easily the best player in the world."

At the final whistle, Butcher - a self-confessed bad loser - left the pitch to the sound of Maradona and his team-mates gleefully celebrating their victory, but he soon came face-to-face with Argentina's match-winner in the tunnel.

"We were both called for drug testing after the game," he says. "I signalled to him, was it hand or head? He said it was his head. I think that was for self-protection because had he said hand, the three Englishmen in the room would have been right across the room to hammer him with our hands!

"It was obviously disappointing to lose the game in the way we did, and that's probably the understatement of the decade," he adds. "We felt cheated with the 'Hand of God', but the overriding feeling after the game was that we didn't play like we could and should have done. That's the biggest thing that sticks in your throat."

Maradona's gamesmanship still wrangles with Butcher, but the passage of time has at least helped him appreciate his astonishing ability.

"Whenever people ask me who the best player I played against was, I have to say Maradona," he says. "He was a phenomenal talent and a great match-winner capable of anything."

Butcher, of course, knows that better than most.