Paul Gascoigne was a football genius and a tormented soul. A new BBC documentary digs deep into both to shed light on a life of magic moments, childhood trauma, hacked phones and dismal lows. Everything is explored but not everything is explained…

"I don't like being on my own. When you are on your own you think a lot. When I was little things happened to us. So when I am on my own sometimes I think about them."

The two-part BBC documentary about the life of Paul Gascoigne is both poignant and pathetic, exploring his extraordinary ability to destroy opponents - and himself.

Most of all, it is an examination of this core question: was he doomed to do so from the very start or was his implosion the consequence of a rapacious media that dogged him long beyond the height of his fame? The answer, much like his own trauma, remains unresolved. 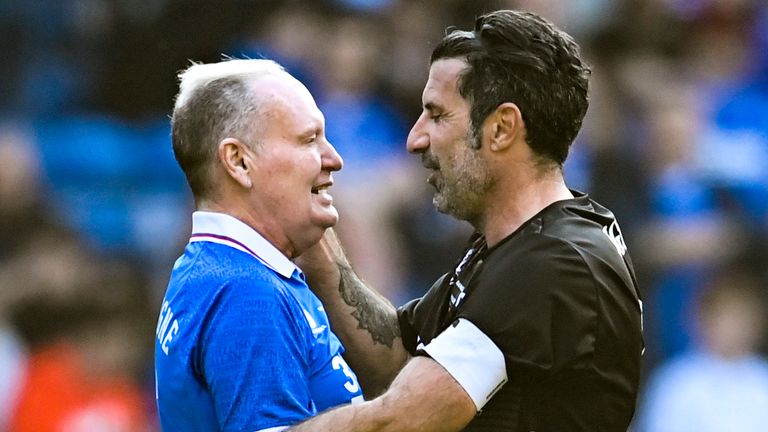 Gascoigne was just a child when a young friend was killed in a car crash, dying in his arms. He blamed himself, developed a stutter and was not given the help that he needed. Football came along and appeared to distract him, maybe even save him. He was no longer alone.

What is striking in this new documentary, five years in the making and peppered with remarkable footage that will amuse and appal, is that the theme of self-destruction began before 'Gazzamania' really took hold.

Even a hint of fame had people fearing the worst.

In a 1980s feature on him at Newcastle, there is already that sense of foreboding. "He is quite a complicated character, actually, and he needs people who love him," says one. A reporter refers to temptations and how he will manage to avoid them in the future.

The transfer to Tottenham in 1988, for a British record fee before he had played for England, only exacerbated fears. "You're a young man in London. How will you stay on the rails?" Asked what he will do with the money, he replies: "Take it to the bookies."

Even when things are ostensibly going well, an appearance on Terry Wogan's chat show has the host openly speculating that all this fame - this suffocating fame - could turn out to be a nightmare. Then as now, people knew where this was going but could not look away.

"There are some characters you know are going to go off the rails," says former News of the World journalist Greg Miskiw. "Gazza was one of them."

For periods of this documentary, the talent shines through amid the noise. The twists and turns at Italia '90, you may have seen before. The free-kick against Arsenal too. For a generation or two, that goal against Scotland at Euro '96 is seared on the brain.

But there is enough lesser-seen footage to fascinate, from those early days at Newcastle through his hey-day with Spurs and some special moments for Lazio. His goal against Diego Maradona's Sevilla is magnificent even though he can hardly remember scoring it.

At his best, he drew people in rather than pushed them away. There was a rare ability to connect with people, to disarm. Tales of performing magic tricks for kids at the World Cup resonate. "People just wanted to touch him," says his old team-mate Paul Stewart.

But there is no shying away from the fact that elements of his character cannot be excused even when attempting to explain. When his then-wife Sheryl was physically abused by him, not for the first time, even Stewart stopped speaking to him for some time.

The media are cast as villains of the piece, but they were often his enablers as much as they were his tormentors. The laughter that greets his gags even during a press conference to apologise for the physical abuse towards Sheryl feels shocking now. England boss Glenn Hoddle stood by him then. He was indulged.

Phone-hacking dominates the second half of the documentary. In a sense that is understandable given that Gascoigne was diagnosed with extreme paranoia. "He wasn't paranoid," says Paul McMullan, another News of the World journalist. "It was true."

It succeeds in painting a vivid picture of the tabloid wars and the claustrophobic lifestyle in which he was now trapped.

That Gascoigne was left unable to trust his own mother, naturally confused when private conversations were emerging in the press, is desperately sad. "He was being used and abused," says one friend.

"I didn't think he had the stability to deal with it."

Indeed, perhaps the surprise is that he was able to hold it together for as long as he did. When Paul Merson recalls him drinking wine on the train up to Middlesbrough for training, he was still widely expected to be named in the squad for the 1998 World Cup.

Could anyone have helped?

"I am not his doctor," says long-time representative Mel Stein. "We controlled his commercial stuff. We did not control his life."

The problem is that neither could Gascoigne.

For now, the story ends where it began. Fishing alone. At 54, his haunted face bearing the scars of a life misled. The saddest commentary comes from his sister Anna. "Football was Paul's entire life," she says. "If he didn't have his football, what would he have?"

And then that most bittersweet of thoughts.

"What would it have been like if Paul had just been an average footballer, just enjoying his job and getting on with it?

"I wish that had happened, I really do."