For an English footballer, Adebayo Akinfenwa’s career began in the most unusual of places: the port city of Klaipeda, which sits at the mouth of the Dane River in Lithuania.

It was amongst the clay-tiled roofs and white-walled villas of the city that he began a footballing journey that would take him from FK Atlantas to Swansea, Northampton and nine other Football League clubs.

Akinfenwa is unique in modern football in that he is neither a fleet-footed speedster or a jinky, all-round striker who is as comfortable stationed out on the wing as he is in the six-yard box. 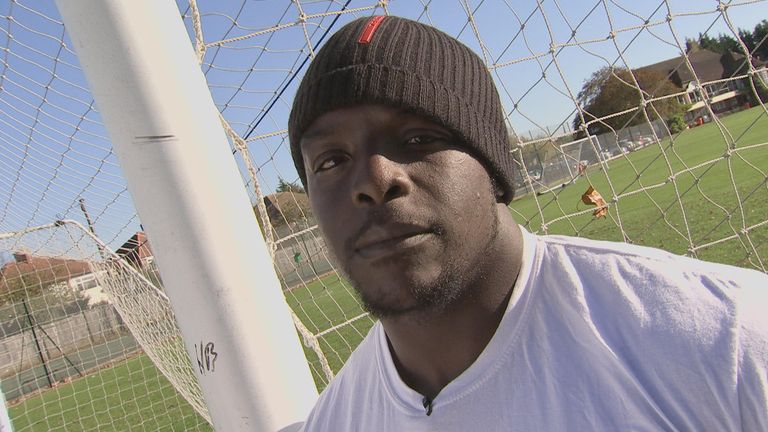 They asked me if I would want to come out [to Lithuania] for a two-week trial, so at 18-years-old I signed for FK Atlantas and it was, there’s no better way to say this, an experience.

Once-upon-a-time football was awash with forwards like Adebayo, target men who bustled, bullied and bested defenders through a combination of skill and brute strength; every club had one, from Duncan Ferguson at Everton to Micky Quinn at Newcastle.

Yet at the beginning of his career Akinfenwa was a very different kind of striker, one who possessed the kind of explosive speed that made him, at times, unplayable.

“It didn’t matter who I was coming across,” he explained. “I’d be able to run past them.”

It was this combination of strength and speed that bought a young Adebayo to the attention of scouts at Watford, where he would spend eight months as a trialist before being released as a 17-year-old. However, with the closing of one door came the opening of another as he was presented with a unique opportunity.

“My agent at the time was married to a Lithuanian lady,” he explained. “They asked me if I would want to come out [to Lithuania] for a two-week trial, so at 18-years-old I signed for FK Atlantas and it was, there’s no better way to say this, an experience.”

Initially, the hope was that the offer from Lithuania could be used as a bartering tool to encourage an English club to take a chance on the young striker but, when one didn’t materialise, his only option was to sign or remain in England without a club.

Moving away from home is difficult for any teenager and it’s even more so when you don’t speak the language in a country that is still coming to terms with life post-Soviet Union. It was with a sad inevitability that Adebayo’s arrival was greeted not with fanfare but a torrent of racist abuse.

“I was the first black person in the league,” he explained. “So, first pre-season game, 1,000 people were [there] chanting racial abuse.”

Rather than succumb to the vitriol that poured down from the stands in those early days, Akinfenwa used it to spur himself on, turning it to his advantage.

“I wouldn’t change it,” he said of his time in Lithuania. “More than anything I would say it was a mental learning curve. I scored a lot of goals out there, I scored the winner in their equivalent of the FA Cup [final] and then I was like a miniature David Beckham!”

Succeeding in the face of adversity has become something of a trademark of Adebayo’s career, from Lithuania to Swansea where he would suffer an injury that has ultimately shaped his development as a player more than anything else.

“Before I broke my leg at Swansea,” he explained. “I felt like when I was on it, it didn’t matter who I was coming across.” Following the injury Akinfenwa had to learn to be a very different type of striker, one who relied on more than just speed to outdo defenders; gone was the direct running and ability to knock the ball past the opposition, being instead replaced by greater cunning and thought. He became, what he called, “just a goalscorer.”

Losing an attribute as integral to your playing style as speed can be detrimental even to the best players. Michael Owen was never quite the same once he’d lost that explosive pace, nor was Norman Whiteside as he attested to in his autobiography.

But for Adebayo it forced him to exploit other facets of his game, ones that he had previously underappreciated.

“Before the injury, I’d never really been into doing weights,” explained Adebayo. “I’ve always been a big guy, so it wasn’t like I just picked up myself and thought, can I be the biggest I can be? It was just, can I be the best I can be. I started it at Swansea and from there it’s just taken on [a life on its own].”

There’s a fallacy abound that Adebayo’s size is simply for notoriety, that he’s big for the sake of being big but that couldn’t be further from the truth. As he explained, once his speed had gone it was simply another asset to exploit; if he can’t out-run opposition defenders, can he out-muscle them? Adebayo’s size is perhaps his most noticeable attribute but there’s an intelligence to his play that is often ignored.

After all, you don’t average 15 goals a season over the last five years by sheer strength alone. Consistency is key.

It’s testament to the work that Adebayo puts into taking care of himself that at 32 years old, he’s enjoying one of his best seasons to date for AFC Wimbledon. With that in mind, defenders of Sky Bet League 2 should be aware that there’s plenty more to come from Adebayo. Beast Mode On.