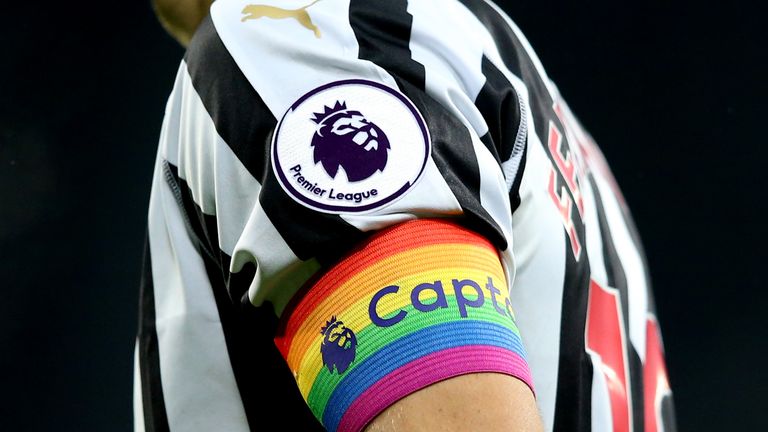 Premier League clubs showed their support for the Rainbow Laces campaign on Saturday.

The initiative, launched in 2013 by Stonewall, is designed to promote LGBT inclusion and 'make sport everyone's game'.

The annual activation period of the campaign began in November and, with the Premier League's involvement this year having begun in earnest with the Cardiff vs Wolves fixture on Friday night, more top-flight clubs around the country have stepped up their efforts in getting fully behind the cause.

Champions Manchester City have been keen supporters of the campaign and Fernandinho was one of the club skippers to sport a rainbow armband during Saturday's 3-1 victory against Bournemouth at the Etihad.

This is everyone's game

We are supporting the #RainbowLaces campaign this weekend 🏳️‍🌈 pic.twitter.com/XqOwQeSsns

Former Chelsea and England left-back Graeme Le Saux, who endured homophobic abuse during his career, is the Chelsea Pride patron and spoke about his thoughts on the campaign on Saturday.

We at Chelsea Pride had the chance to make a brilliant short film about #LGBT inclusion in football - thank you to @ChelseaFC, @graemelesaux14 @gogibbogo and our co-Chair @Chelseagirl78 for the continued work in inclusion 👇👇👇🌈⚽️ #RainbowLaces @stonewalluk https://www.chelseafc.com/en/news/2018/12/1/le-saux-and-lgbt-supporters-group-raise-awareness

"Thankfully, I know no other player who will go through what I went through, because the environment has changed so much," Le Saux told Chelsea's official website.

"It's not perfect. But I think we've come a long way in a relatively short period of time and the fact that the club have got their own equality consultant, who oversees everything, is a big step in the right direction which other clubs should follow."

Chelsea will continue to support the Rainbow Laces campaign on Sunday for their match against Fulham, live on Sky Sports from 11am.

Sky Sports is a member of TeamPride and supports Stonewall's Rainbow Laces campaign, which is currently receiving its annual activation across British sport until December 7.