Harry Kane became the highest-profile casualty of the festive football schedule after limping off with a hamstring injury during Tottenham's 1-0 defeat at Southampton.

With his side trailing at St Mary's, the England captain pulled up clutching his left hamstring after seeing his 73rd-minute strike ruled out for offside.

Kane, who started four games in 11 days for Spurs during the festive season, looked uncomfortable as he trudged off the field to be replaced by Erik Lamela.

The England striker left St Mary's Stadium on crutches, sparking fears he could be set for a lengthy spell on the sidelines.

"Harry Kane plays every minute, he plays all the time. It might be big, it might be small," Mourinho said on Kane's injury. "For sure he will be out.

"It is negative...hamstring is always negative. Is it a tear, is it a small thing, is it a contraction? At this moment I cannot say."

Kane followed club-record signing Tanguy Ndombele, who picked up a problem in the 25th minute, in limping off the pitch at St Mary's, much to the frustration of Mourinho.

"Ndombele, he is always injured," Mourinho added. "You are full of hope. One game he is in and then he is injured. It is a concern."

"I imagine this is the tenth injury of the season. They stop him to play. It doesn't give him continuity.

"We had three days between matches. Once more, he is out again."

The 26-year-old was not the only Premier League player to pick up an injury after a run of three games in a week...

Newcastle were the worst hit with four players leaving their defeat to Leicester because of injury.

Steve Bruce lost full-backs Jetro Willems and Javier Manquillo during the first half, while Jonjo Shelvey was replaced at half-time as the Newcastle head coach made all three substitutes before the start of the second half.

To make matters worse, Newcastle also lost Fabian Schar early in the second half to what appeared to be a hamstring injury, forcing them to play out the final 39 minutes with 10 men.

DeAndre Yedlin, who replaced Willems, also broke his hand but managed to finish the game. 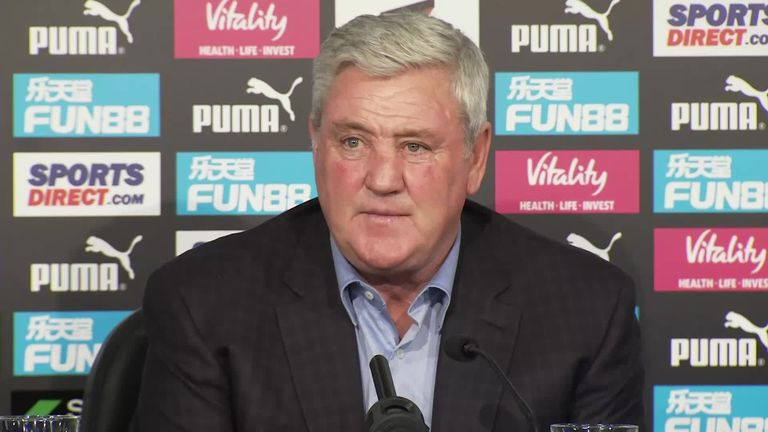 "I've been involved in the game for 40 years but I've not seen anything like that," Bruce said following the Leicester defeat. "We lost four players in 20 minutes and gifted them two goals.

"You get injuries by forcing players to play tired. That's not an excuse, it's a fact.

"I was concerned before the match, I made that clear," he added.

"I said it a month ago that to ask players to play four games in 10 days is ludicrous. Today is the consequence."

Aston Villa pair Tom Heaton and Wesley were stretchered off with injuries during their 2-1 win at Burnley.

England international goalkeeper Heaton failed to get back to his feet after attempting to save Chris Wood's header in the 80th minute. He was down for around five minutes with a twisted right knee and was subsequently replaced by Orjan Nyland.

Heaton became the second Villa player to be stretchered off after striker Wesley had gone off 10 minutes earlier. The Brazilian was on the receiving end of a tackle from Burnley defender Ben Mee and looked to have an issue with his right leg.

Burn out for up to eight weeks

Brighton defender Dan Burn has suffered a fractured clavicle that will keep him out for six to eight weeks, according to Albion boss Graham Potter.

Burn was replaced by Bernardo just 22 minutes Brighton's 1-1 draw with Chelsea at the AMEX Stadium following a challenge by full-back Reece James. Former Fulham and Wigan defender Burn has played in all of Brighton's 21 games so far this season.

When asked in his post-match news conference what he made of the challenge from James that led to the injury, Potter said: "I don't think there was anything sinister to it, it just looked like a really heavy contact. These things happen in football."

Kiko Femenia was another to suffer injury during Watford's 2-1 victory against Wolves at Vicarage Road.

The 28-year-old was forced from the field in the 60th minute, again with what looked like a hamstring injury.

Femenia has played every minute of Wolves' three previous games over theChristmas period.

Bernard injured in warm up

There was a further injury ahead of the evening games and it came at the Etihad Stadium.

Everton boss Carlo Ancelotti was handed a blow before kick-off with Bernard picking up what appeared to be a knee issue in the warm-up following a tackle from team-mate Yerry Mina.

"Premier League managers from Jose Mourinho to Pep Guardiola have been queuing up to criticise the packed festive fixture schedule recently and there was plenty more evidence of why on New Year's Day as a string of players from clubs up and down the table succumbed to injury.

"Kane was the most high-profile, suffering a suspected hamstring problem on his fifth start in 17 days, but Tottenham were not the only ones affected and, with many Premier League sides already having to cope with long absentee lists, the debate over the schedule is sure to intensify following the third round of fixtures in just six days.

"The Premier League have introduced a February winter break this season, which will take place across two weekends, but it is little comfort to the sides already decimated by fatigue-related injuries. Leicester boss Brendan Rodgers summed up the views of his counterparts last week. "It's 'Let's pretend to have a break'," he said. "It's disappointing to say the least.""