Caglar Soyuncu has had to bide his time but, in a breakthrough season, he tells Sky Sports how he is learning from Kolo Toure and how Leicester feels like home.

He is known around Leicester's training ground for his pranks - an unexpected headlock, a playful jab in the ribs - so it is a relief that Caglar Soyuncu offers a gentle handshake, a soft merhaba greeting in his native tongue.

There has been time only to unlace his boots and step into sliders after the brisk morning session - a defeat against Southampton to get out of the system - because the imposing defender is in demand these days.

He is lending his support to a mental health campaign. There is a message of endorsement to deliver for a Turkish television station. And there is a tale for one of the breakout stars of this Premier League season to tell about patience paying off.

Soyuncu - joker, fan favourite, ambassador - has been an ever-present this term for a Leicester side that has wobbled in recent weeks but proved a potent force under the stewardship of Brendan Rodgers. Only Liverpool have been breached fewer times and the side is jostling, it seems, with Manchester City for second spot.

He is effective and eye-catching and it is not just the tousled hair and cartoonish, sculpted jawline but the elegant physicality of his play, the compelling blend of rudimentary defending and Cruyff-turning risk-taking.

He admits it was a "challenge" replacing Harry Maguire following his £80m departure to Manchester United last summer but Char-lar, as his first name is pronounced - his team-mates settle for 'Cags' - has been steadily growing in confidence on and off the pitch.

"I would say the most important thing has been playing regularly," he tells Sky Sports, smiling knowingly at certain questions but answering through a translator as he continues to work on his English. "When you're playing, you can only get better. The fact that the manager trusts in me - that gives me self-confidence.

"And we have a lot of fun at training," he chuckles, thinking about those headlocks. "It's a great atmosphere."

After several months on the periphery under Rodgers' predecessor, Claude Puel, following a £19m move from Freiburg in the summer of 2018, Soyuncu is thriving in a tight-knit group that permits his high jinks and embraces his bold approach to the game.

He wants to be a modern defender in "the best league in the world" and his numbers support the sense that he is warrior and playmaker, combat and composure combined. He tops the Leicester ranks when it comes to blocks, headed clearances, aerial duels yet builds attacks with short passes to feet - as Rodgers encourages him to do so - with striking success.

Soyuncu nods when told he has in fact made a higher percentage of forward passes than Liverpool's imperious Virgil van Dijk - 33 per cent to Van Dijk's 30 - but he is a player out to forge his own path, a man becoming ever surer of his own identity.

"I'm always looking to learn from other people but I'm not trying to imitate anyone or become anyone," he says firmly. "I'm trying to develop my own style. I trust my skills."

His skills - honed up front and in midfield during his early years in Turkey - have got him out of trouble, even if if his decision-making occasionally lands him in it. He memorably left Christian Pulisic discombobulated, scooping the ball over his head by the corner flag, at Chelsea earlier this season. A double Cruyff turn - followed by a 40-yard crossfield pass - gave Newcastle's Miguel Almiron the slip in showboat fashion.

"Wee maverick things," is how Rodgers puts it. For Soyuncu, it is knowing which gambles he can take, when.

"I try to learn something from every game I play. It's about minimising my mistakes," he admits, thinking back to the time he bundled over Manchester United's Marcus Rashford to concede a penalty, or failed to track Harry Kane.

He is eager to keep improving and he is adding versatility to a growing list of qualities. He has played mostly alongside Jonny Evans in a central defensive pairing, sometimes in a three, usually on the left but occasionally - as was the case against Southampton - on the right. "I do as I'm told! It doesn't matter if I'm on the left or the right. The manager is very good tactically. He and his staff analyse the opposition and we play accordingly."

Evans is a constant source of encouragement on the pitch - "he's always trying to help the younger players" - and Soyuncu feels indebted as well to Leicester's first-team coach and former Arsenal legend Kolo Toure. Toure, who followed Rodgers from Celtic to the King Power, is providing one-on-one sessions, as well as those for Leicester's defensive unit, attempting to work on his positioning, marking, set-piece threat through regular video analysis.

"We all make mistakes... and he tells me when I make mistakes! But he also shows me where I have done well. He's played for his national team, played in the Premier League and had a great career. So I'm lucky that he plays the same position."

The 23-year-old has leaned on Toure's shoulder for support off the field, too. "He was very young when he came over to England as well. He's shared his experience with me, the difficulties he had when he first arrived. It helps to listen.

"Being in Germany before coming to England made it slightly easier to adapt but Kolo, my team-mates, lots of people at the club have helped me."

He is matter-of-fact about the challenges of living alone and struggling with the language - a handful of words he ventures in English about the January weather as way of small talk suggests he is acclimatising to British life very nicely - but during his journey from Izmir to the East Midlands, via Germany where he arrived as a 20-year-old, he has carried with him the modest values of his first senior club, Altinordu.

There on the west coast of Turkey, he got off lightly from farming duties as he prepared to become the first player from the Turkish second division to move to the Bundesliga but he was struck how club chiefs espoused the importance of provenance - fruit, vegetables and footballers.

He emphasises the value of humility and hard work. "We say in Turkey, it's more important where you make your living than where you were born. You have to make that place your home. And I have made this place my home."

The fans have helped him to settle. "From the first day I arrived I felt the warmth coming from the supporters," he says. "It's not just me, they support the whole team. Winter, summer, home and away, they love their team. When you do well and see the supporters happy, it makes me feel proud."

Those Leicester supporters have Champions League football once again in their sights and a cup triumph perhaps - they will meet Aston Villa at the end of the month for a place in the Carabao Cup final.

But after a mixed run of results, Soyuncu's eyes are on the Super Sunday clash with Burnley that he hopes will "kickstart" a winning run similar to that between October and December, when victory against the Clarets sparked a club-record eight successive league wins.

"There's a long way to go," he insists. "We don't talk about targets, we're only concentrating on the next game." 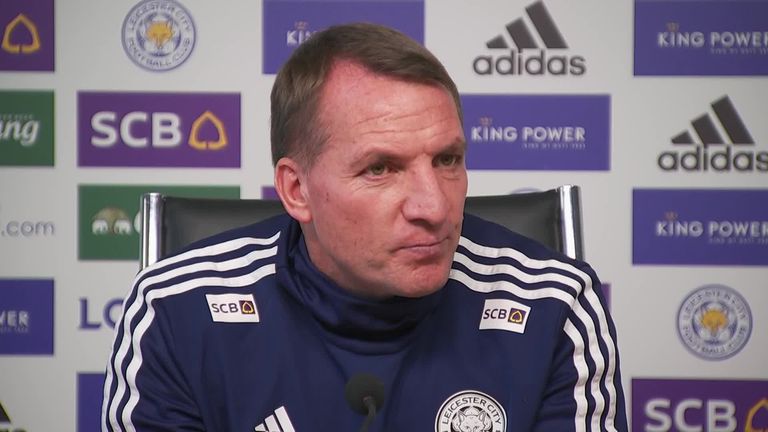 He retains a steely focus when it comes to personal prospects, as well as collective ones. He has been on Manchester City's scouting radar. There are early talks over a new, improved Leicester deal. But what matters right now is the feeling of contentment, of belonging.

"I'm a Leicester player and I'm giving my best," he says. "I've done that for every team I've played for. I'm just trying to give my all. Yes, I'm happy. This feels like home."