Palace unhappy after Man Utd's controversial 2-0 win; "We're not fortunate at the moment. The gods of fortune aren't smiling on us," says Hodgson 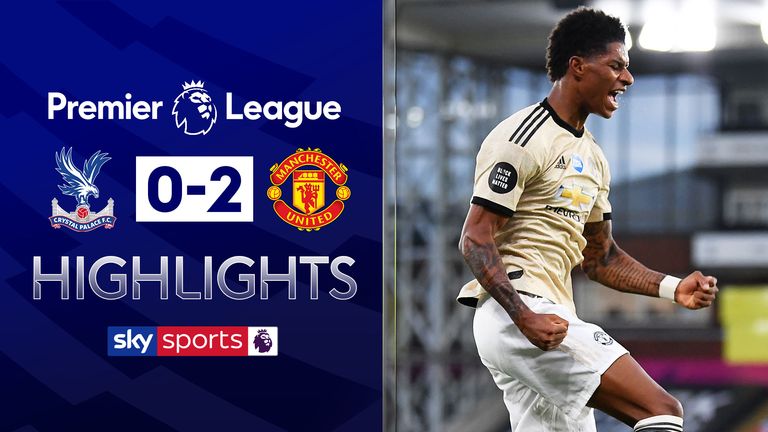 Was Wilfried Zaha fouled by Victor Lindelof? Ole Gunnar Solskjaer said it was the correct decision while Roy Hodgson felt "hard done by".

With the game at 0-0, Palace wanted a penalty a minute before half-time when Zaha tangled with Lindelof after a superb run. Referee Graham Scott waved away appeals, while VAR's Simon Hooper adjudged the Swede to have got a touch on the ball, and the hosts were left even more frustrated when United opened the scoring in the first minute of stoppage time.

Unite went on to win the game 2-0 with goals from Marcus Rashford and Anthony Martial at Selhurst Park that took them back level on points with fourth-placed Leicester.

However, Palace were more than a match for their opponents and they had a goal overturned by VAR that would have made it 1-1 when Jordan Ayew was deemed to be an inch offside when turning home Zaha's cross.

This means seven goals which were originally awarded against United have been overturned by VAR this season, the joint-most of any side in the Premier League alongside Southampton and Brighton.

The reaction: Were the decisions right?

"It looks like Victor gets the ball and they tangle their feet, so I think that's OK what they do there," said United boss Solskjaer.

Meanwhile, Hodgson took a measured view regarding the Zaha decision, saying everyone will have different opinions but did feel his team had been "hard done by."

The Palace boss said: "You're always going to believe that when decisions go against you like that, they're wrong but I'm sure Ole has said the decision is right. I find that toing and froing pretty meaningless. It wasn't a penalty as the referee didn't give it and the VAR didn't overturn it. And we feel hard done by again but there are no points for feeling hard done by.

"We're not fortunate at the moment. The gods of fortune aren't smiling on us.

"Firstly with certain decisions, but they're not smiling on us as we're doing so well in so many areas and we're not getting rewards for the efforts. My feelings go out to the players as they couldn't have done more. We've won games against top teams like Manchester United playing a lot worse than we did tonight."

Although United weren't at their best up against a tenacious Palace side, their quality in the final third shone bright once again. Both Rashford and Martial now have 22 goals apiece across all competitions and the pair have now assisted one another a combined seven times in this season's Premier League, the most of any pairing in a single season for United in the competition.

Solskjaer couldn't hide his delight regarding their blossoming strike partnership.

"Marcus is just enjoying himself," Solskjaer said. "Enjoying his football. Him and Anthony together link really well off each other and when I can see those boys, with that body language of smiling and positive, I'm delighted.

"We didn't really get going, especially before half-time. But in moments we show what we can do and it's great to watch that tempo when the ball goes forward, the runs go forward, movement of the ball, so two fantastic goals."

'If Bruno Fernandes is the restart king for Manchester United with five goals and four assists then Anthony Martial might be the man of 2020. Not only is he one of three players to have outscored his team-mate this past month, he is the top scoring Premier League player in all competitions in 2020 with 12 goals. Ten of them have come in the Premier League itself with Mohamed Salah the only other man in double figures.

'There had long been speculation about Martial's best position. The Frenchman has spent plenty of his United career out on the left wing with Rashford sometimes preferred in that central role but that debate appears to be over. The pair have dove-tailed perfectly.

'In fact, the combination play that led to United's second against Crystal Palace was the seventh time that one of the two players has assisted the other for a goal in this season's Premier League. Remarkable as it might seem given the success that the club enjoyed under Sir Alex Ferguson, that is the most of any pairing in a single season for Manchester United.'