Match report and highlights as goals from Rodrigo, Kalvin Phillips and a Patrick Bamford penalty give Leeds a fourth Premier League win in a row; Hal Robson-Kanu nets a late consolation for relegated West Brom 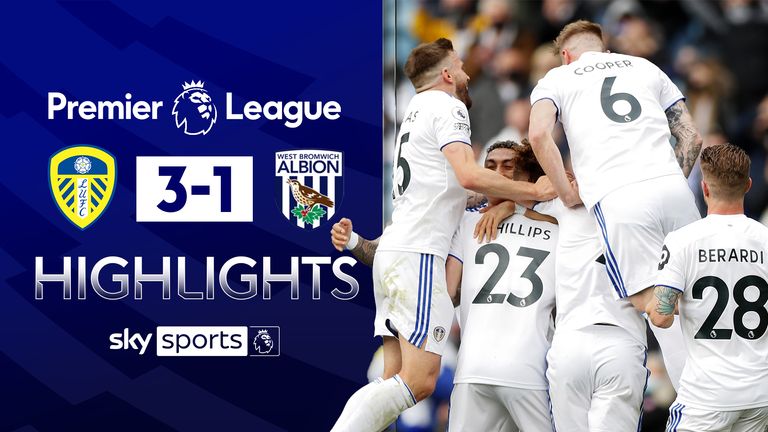 FREE TO WATCH: Highlights from Leeds' win against West Brom in the Premier League

The hosts then introduced top-scorer Patrick Bamford at the break, with the striker adding a third from the spot with 11 minutes to go, before Hal Robson-Kanu's netted a last-minute consolation for Sam Allardyce in his final game in charge of West Brom.

As a result, Leeds ended the season in style with four straight wins - the club's best top-flight run in 19 years - to finish ninth in the table, while the 19th-placed Baggies drop down to the Championship on the back of four defeats in a row.

How Leeds ended their top-flight campaign in style

Driven on by the return of more than 8,000 raucous fans at Elland Road, Leeds tore into their opponents right from the off, with Jack Harrison netting after just seven minutes - only for the goal to be ruled out for offside against Rodrigo in the buildup.

Ten minutes later, though, the home team were ahead as this time Rodrigo timed his run to perfection to get a head on to Raphinha's pacy corner from the right, with the Spaniard stooping to score his seventh goal of the season.

That narrow lead was deservedly doubled three minutes before half-time when Phillips's clever free-kick from the left edge of the area somehow bounced past Sam Johnstone at his near post after a rare error by the Baggies No 1.

Leeds boss Marcelo Bielsa opted to give old favourites Pablo Hernandez and Gaetano Berardi a run out in their final appearances for the club, while West Brom also made two changes from their 3-1 home loss to West Ham on Wednesday night, with both Dara O'Shea and Callum Robinson starting.

And after an emotional send-off for Gaetano Berardi and Pablo Hernandez with 20 minutes left to go, with both playing their last games for Leeds, the hosts wrapped up the win when Okay Yokuslu handled Harrison's cross in the box. Bamford confidently dispatched the penalty as Leeds became the highest-scoring promoted side in Premier League history.

The visitors, meanwhile, did have time for a late consolation after a rare mistake by Phillips, who mis-controlled Liam Cooper's pass to present Robson-Kanu with a clear run on goal which the substitute gratefully accepted.

Leeds finish the season with 59 points, the best tally by a promoted club in a Premier League season since Ipswich Town in 2000-01 (66).

West Bromwich Albion have lost four league games in a row for the first time since a run of eight consecutive defeats between January and March 2018.

Leeds have won four in a row in a single Premier League season for the first time since April 2001 (6 in a row).

With West Brom, Sam Allardyce registered his worst points per game with any club in the Premier League (0.76), averaging exactly one goal scored (25 in 25) and two conceded per game (50 in 25) with the Baggies, also lows for the manager in the competition.

Raphina registered his 9th Premier League assist for Leeds, the first player to do so in a top-flight season for the club since both Jimmy Floyd Hasselbaink (13) and Harry Kewell (9) in 1998-99.

Leeds' striker Patrick Bamford netted his 17th Premier League goal of the season, the most by a player for a promoted club in a top-flight campaign since Charlie Austin for QPR in 2014-15 (18).

Man of the Match - Pablo Hernandez

It was a nice touch by Leeds boss Marcelo Bielsa to hand Hernandez, and Gaetano Berardi, a start on their final appearances for the club on Sunday afternoon, with the former turning in a man-of-the-match display in response.

The Spaniard was a joy to watch before finally being hooked with the Swiss with 20 minutes left to play to a rousing standing ovation, controlling the contest with his imaginative passing and clever movement off the ball.

The only disappointment was that the 36-year-old playmaker did not sign off with a goal, despite his team-mates' best efforts to set him up in the second half, but he did end his brilliant four-year Leeds career with a win and a performance that rolled back the years for those fans in attendance at Elland Road.

Leeds boss Marcelo Bielsa: "It has been a very satisfying, but very difficult season and I feel like we could have had a few more points.

"I thought it was an unforgettable game, but it was also a great homage to two players that stop belonging to Leeds. The responses that they got are only given to players who give their all and deserve it.

"Pablo's performance today indicated that he deserved more minutes this season than the ones I gave him this year and Berardi after such a long time without playing, showed he could still be current."

West Brom boss Sam Allardyce: "I think they have got the basis of a Championship squad that can challenge.

"It needs some additions, obviously. But I think there is the basis of a very talented Championship squad.

"I think the experience they have had this year will make them even better when they go back down to the Championship.

"I think it's a level they are going to be very good at.

"They have a great opportunity to show how good they are in the Championship. They will need to strengthen the squad but that's for somebody else."