Tottenham suffer back-to-back defeats in the Premier League after losing 3-0 to Chelsea; N'Golo Kante's introduction as a second-half substitute powers Chelsea to joint-top of the Premier League with Liverpool and Manchester United Roy Keane has lambasted Tottenham's display in their 3-0 home defeat to Chelsea, admitting that Spurs' collapse had left him "angry".

Despite a robust first-half display, Tottenham folded after the interval following the Blues' introduction of N'Golo Kante.

"I couldn't believe how bad Spurs were. You can have an off day and sometimes you lose to quality but there was a lack of desire from Spurs for the second and the third goals," said Keane.

"I'm pretty angry from watching Spurs today. The difference in desire and wanting to win a football match we see with the second goal. Chelsea won the ball back and Tottenham didn't do the basics. I'm talking about closing players down and putting your body on the line.

Fellow Sky Sports pundit Graeme Souness was equally unimpressed: "Spurs didn't look like a team. They were making fundamental mistakes which led to goals. At this level, the highest level, if you don't do the basics right you will get punished."

Tottenham had started the match well but struggled after the interval when Kante came on for Mason Mount.

The midfielder scored Chelsea's second goal, with Thiago Silva heading in the opener from a corner and Antonio Rudiger applying the final gloss in the closing stages.

"A lot of the time it's about who wants to head the ball," continued Keane. "Spurs don't have players who want to defend and head the ball. They needed to put their bodies on the line."

Analysing Chelsea's second goal, in which Kante was allowed time and space before his shot deflected past Hugo Lloris, Souness was particularly critical of Pierre-Emile Hojbjerg, who was slow to close down his Chelsea opponent.

"Get out to the ball now!" Souness urged. "Kante had far too much time. These are basic things.

"If you are Hojbjerg and a central midfield player, there are certain things you do in a game which should happen on auto-pilot. 'The ball has gone out, I'm back out, I'm not standing holding hands with Dier'. He was just walking out.

"Get out and engage Kante now! Run! Sprint!"

Reminded of Spurs' encouraging showing during the first half, Keane scoffed: " There's no use doing it for 45 minutes. You've got to do it for the duration of the game. Chelsea have a brilliant team, but (Harry) Kane's body language and his performance today... oh my goodness!"

But Tottenham head coach Nuno Espirito Santo said he was "proud" of his side's first-half display.

"It's difficult, but I'm proud of the first half and of all the game because we had troubles in the team and the players went to their limits," he told Sky Sports. 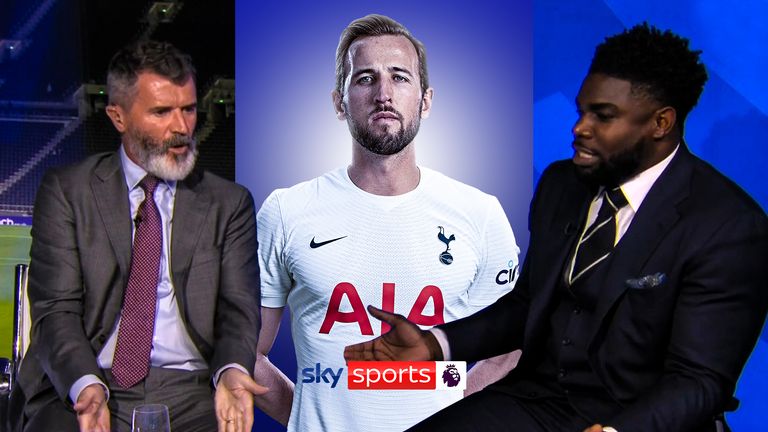 Kane has had four attempts in four games and is without a league goal from his first four league games for the first time since 2015/16.

"He has scored goals this season for his country but for me today it was more his body language," said Keane. "He's your top man and the guy you'd hang your hat on even when you're having an off day. That's when you've got to create an argument and knock somebody over. I never see him digging anyone out, ever.

"My concern is that there's a bit of a hangover from the summer.

Souness added: "Jose Mourinho was credited with finding a new position for him where he came deep and got on the ball. Kane is someone who can see a pass and is a lovely striker of the ball but I would offer a different argument.

"For strikers, as they get older, they like to drop deeper as they don't want to be up against the centre half. That's what I see in Harry Kane. I hope I'm wrong but he's not playing like a centre forward.

"Right now he's playing in midfield and he needs someone to point out to him that he's a striker."