Were Arsenal right to feel aggrieved after their highly contentious defeat to Manchester City? We take a look at the big calls...

FREE TO WATCH: Highlights from Manchester City's win against Arsenal.

The scoreline was still 0-0 when Arsenal had their first reason for grievance on Saturday. 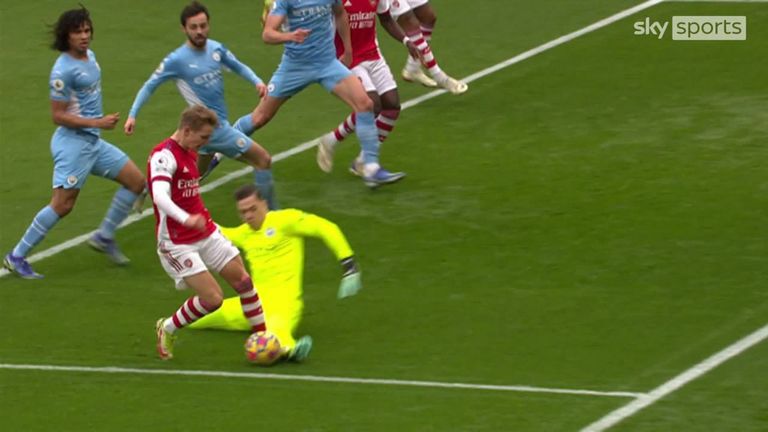 Arsenal felt hard done by when Martin Odegaard was seemingly fouled in the box, but VAR decided not to overturn the referee's decision

A free-flowing move from the hosts saw them cut through Manchester City - as they did on a number of occasions during the first half - but ended with Martin Odegaard going down under a challenge from Ederson.

It looked to be a close call, with the movement of the ball suggesting the City goalkeeper made contact with it, and referee Stuart Attwell waved away the Arsenal appeals.

But replays of the incident clearly showed Ederson making contact with Odegaard before the ball.

VAR Jarred Gillett looked at the incident but decided to stay with the on-field decision, despite the apparent error.

VAR's refusal to intervene, especially in the context of what was to follow in Manchester City's favour in the second half, provoked widespread bafflement.

"Confusing is the right word," said Arsenal assistant boss Albert Stuivenberg, who was standing in for the Covid-hit Mikel Arteta. "We are looking for consistency there. For me, the Odegaard moment is a clear penalty but if there's any consistency there, you'd say bring the referee over to check [the pitchside monitor]. That didn't happen.

"And with the City penalty, it happens and I thought it was quite soft." 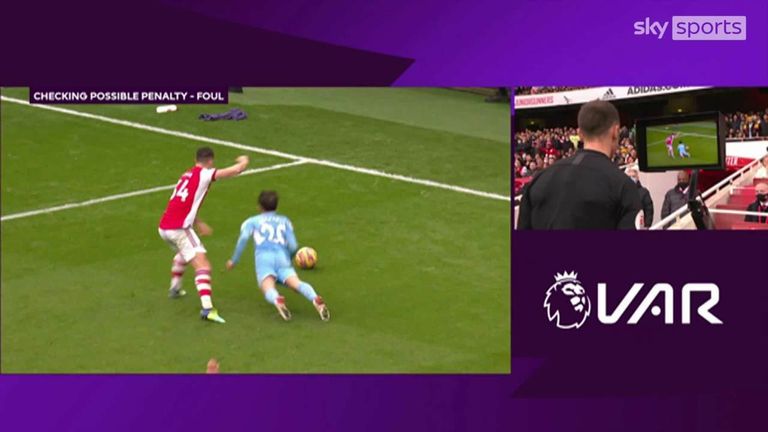 With Odegaard's penalty shout dismissed, was it right that this penalty was given?

Arsenal's mood went from bad to boiling point when Manchester City were eventually awarded a penalty after Bernardo Silva went down in the penalty area under a challenge from Granit Xhaka in the second half.

It looked a clumsy challenge from Xhaka. But while Xhaka had hold of Silva's shirt, the City midfielder appeared to already be on the way down.

Once again, Attwell didn't give the penalty on the field. However, on this occasion, the VAR did advise the referee to review the incident on the pitch-side monitor and he changed his decision, handing City a way back into the game as Riyad Mahrez converted the spot-kick.

Sky Sports' Lewis Jones, who was at the Emirates Stadium, said: "There is huge frustration from the Arsenal fans around the press box. But it's a lazy challenge from Xhaka, who has previous for these kinds of moments.

"The incident was shown on the big screen, which Xhaka saw, and his reaction to that could have led to a second yellow card. He was quite lucky and needs to calm down."

Pep Guardiola was convinced it was a spot-kick, too - and pointed out Odegaard's earlier claim hadn't been shown on the big screen in the same way.

"I didn't see the [Odegaard] penalty, they didn't show it on the [big] screen. And they showed it on the screen for Bernardo. So Arsenal did it well. But it's a penalty [Bernardo's]. But I couldn't see the potential penalty for Odegaard so I cannot say."

A crazy five minutes at the Emirates...

"Let’s take a look at that amazing five minute period...

"Silva goes down under a challenge from Xhaka. Attwell says no penalty. VAR advise him to go to the screen and he changes his decision. Xhaka and Gabriel are booked in the aftermath.

"Arsenal counter and Ake makes an amazing clearance off the line and Martinelli misses an open goal. From the next attack, Jesus draws a foul off Gabriel who receives a second yellow card. 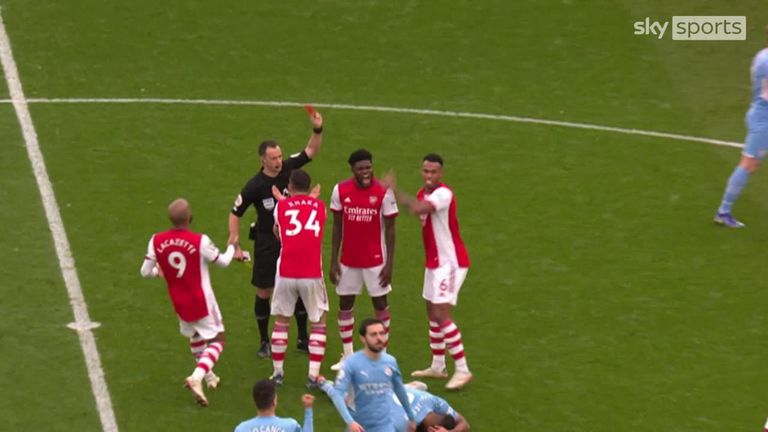 Gabriel was sent off following a second yellow, with his first being given controversially following an attempt to rough up the penalty spot.

Arsenal's frustrations did indeed boil over, however, and it left them with 10 men for the final 30 minutes of the game as Gabriel Magalhaes was shown two yellow cards in quick succession.

Arsenal supporters would argue that Gabriel's first booking would have occurred had both penalty decisions been dealt with appropriately, but the Brazilian defender can have no complaints about the two yellows he received in quick succession.

The first offence was soft, with referee Attwell supposedly cautioning Gabriel for scuffing the penalty spot up before Mahrez's kick. Goalkeeper Aaron Ramsdale was also spotted doing the same thing by the TV cameras but went unpunished.

However, after the game, Albert Stuivenberg - filling in for Mikel Arteta for the post-match media duties - said Gabriel's first booking was for something he said, rather than anything done to the spot.

When asked if the initial caution was for scuffing, he replied: "That's not what the players are telling me. He made a remark to the referee and other players confirmed that. It was a normal comment and he was given a yellow card. It doesn't matter in the end as if you have a yellow card, then you must control your emotions better.

"He mentioned to me that he mentioned the first penalty moment with Odegaard and asked the referee 'what happened there then' so no dirty language was used, just a comment. That was what Gabriel told me."

Gabriel's second yellow card was also avoidable minutes later when he stopped Gabriel Jesus in his tracks on halfway to halt a City counter-attack. Again, there should have been few complaints about the booking - was it really a challenge he needed to make? His rash intervention went a long way to deciding the outcome of the game as the contest swung firmly in City's favour.

Rodri was the eventual hero for Manchester City when his stoppage-time strike sealed all three points for Guardiola's side.

It sparked wild celebrations from the midfielder and his team-mates, who ran straight over to celebrate in front of the Arsenal fans. It led to objects being thrown on the field from the home fans aimed at the City players, and Rodri was eventually booked for taking his shirt off in the celebrations.

But should he have had an earlier caution? There are plenty on social media who think so.

Rodri only made two fouls in the game. The first was on Martinelli right on the edge of the Man City penalty area, which went unpunished. The second was for a foul on Alexandre Lacazette, which was also escaped further punishment and actually led to Bukayo Saka being booked for his complaints to the referee.

In fairness to the referee, it could be argued that neither of Rodri's fouls, although they stopped promising Arsenal attacks, were bookings. However, Arsenal's grievances come because of the quickness of the referee to caution the Arsenal players, particularly Gabriel and substitute Rob Holding, who were both booked after just one foul.

Arsenal had just been beaten by Manchester City - nothing new there, of course.

But it was different this time.

The home fans stayed and cheered their team with great gusto, in full appreciation that Mikel Arteta's team were absolutely superb against the champions-in-waiting. The better side for 85 minutes of the match, in fact.

The problems came in the other five minutes midway through the half. I'm not sure I've been at a match where the game has changed so much in such a short space of time. Unfortunately for Arsenal, it was much of their own doing.

Granit Xhaka's lazy challenge and shirt pull on Bernardo Silva gave the referee a decision to make. Gabriel Martinelli - full of energy and quality - snatched at what was an open goal chance after Nathan Ake's miraculous clearance off the line. And then Gabriel Magalhaes' moment of inexperience blotted his copybook when picking up his second yellow card for a needless foul.

Those three incidents defined the result. Elite teams like Man City feast upon such mistakes and although Arsenal were superb in every department, the big moments in the match were gobbled up by the City machine.

At the end, it's very frustrating but Mikel was very proud of the performance and at the same time, frustrated," said Arsenal coach Albert Stuivenberg, who was standing in for the absent Arteta.

Frustration was the perfect word to sum up the feeling in the ground at full-time. But when the dust settles, those Arsenal fans can look back on a performance that gives the club so much hope and excitement for the future.