Two big calls went Liverpool's way in the 3-1 victory; Roberto Firmino was adjudged to be onside by VAR for Alex Oxlade-Chamberlain's goal and VAR awarded a controversial penalty on Diogo Jota to seal the points; Vieira said they were mistakes

Patrick Vieira criticised the performance of the referees in Crystal Palace's 3-1 defeat to Liverpool, pointing to two goals he felt should have been chalked off.

Liverpool edged to a nervy victory against Palace on Super Sunday, keeping Manchester City in their sights at the top of the Premier League table.

However, the win was tinged with controversy as two big refereeing calls went the way of Jurgen Klopp's men with Roberto Firmino not called offside for Alex Oxlade-Chamberlain's goal to make it 2-0 and VAR stepping in to award Liverpool a penalty to make the game safe at 3-1.

Palace manager Vieira said: "[Oxlade-Chamberlain's] goal shouldn't have been allowed. The penalty shouldn't be allowed. So all I can do is give you my frustration. I prefer not to go too far because I don't want to be in trouble." 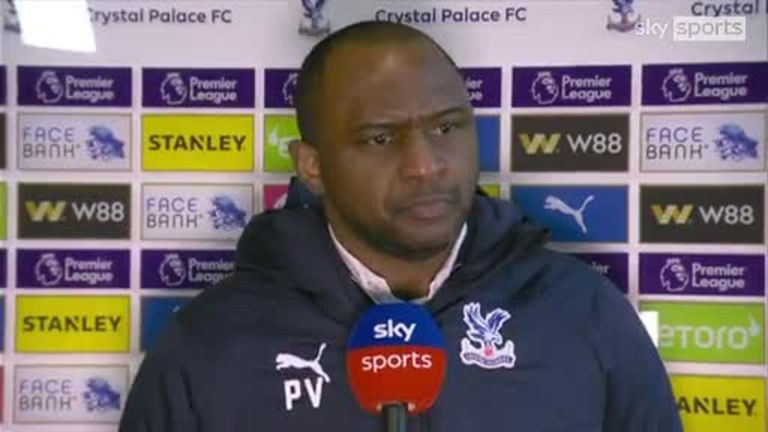 Patrick Vieira praises his team's personality despite losing to Liverpool 3-1, but also blames two refereeing decisions for taking the game away from his Crystal Palace side.

INCIDENT: Andy Robertson's cross from the left pinged over the box to reach Alex Oxlade-Chamberlain on the far side of the area. He controlled well before firing into the bottom corner. 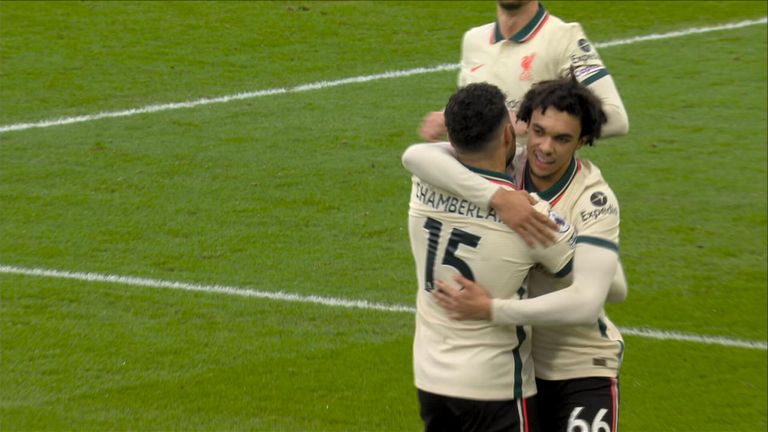 Oxlade-Chamberlain doubles Liverpool's lead - but should the goal have stood?

However, there was a question of offside for Liverpool's second after a jump from Roberto Firmino in the middle as the cross came in. After a brief VAR check, they deemed the defender or the goalkeeper were not impacted by Firmino despite him jumping for the ball. The word from Stockley Park was that Firmino didn't affect the game with his jump.

JAMIE REDKNAPP'S VERDICT: "It shouldn't stand. Firmino is offside as Mitchell has to mark him. He goes for the ball and makes Mitchell's position change."

INCIDENT: Controversy reigned late on with another refereeing decision going against Palace to put Liverpool 3-1 in front. Vicente Guaita and Diogo Jota collided inside the area, with Kevin Friend initially waving away the claims. But VAR intervened, with the referee consulting the pitchside monitor, and awarded Liverpool the spot-kick. 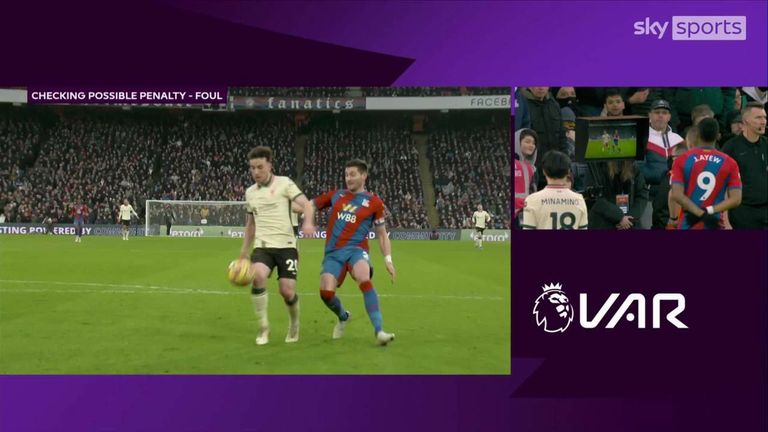 Were Liverpool fortunate to be awarded a penalty following this incident involving Vicente Guaita and Diogo Jota?

JAMIE REDKNAPP'S VERDICT: "It's not a penalty. The referee got it right. You can see Jota going into the goalkeeper. VAR got it wrong but the referee still has the ability to go to the screen and trust his original decision. Liverpool will take it. It's been a great week for them. They had to hang in there today as they weren't at their best today."

PATRICK VIEIRA'S VIEW: "I strongly believe it was a huge mistake from the referee. That took away our hope to try and get the points. That decision had a massive impact on the game today. You have to look at the performances of the referees. I'm always honest about referees but today the referees didn't have a good game at all. It happens too often at home when we play the big teams.

"The reason is having those meetings with the referee and explaining to coaches that contact is part of the game, so that if there is a situation like that and there is not an obvious contact, there will not be a penalty.

"This one here and when you look at the situation with Jota, who I believe was really quite smart, but at the same the referee was naive or the VAR I should say was naive.

"There is no way that Jota could get the ball back and score or that Vince tried to stop. There is no way Vince and Jota cannot have contact because of the situation they were in."

JURGEN KLOPP'S VIEW: "I didn't see it but Jota thought it was a penalty, I could see that on the pitch.

"VAR thought it was a penalty and that is why the referee went to the screen so I am not sure what we are talking about now? Four eyes watched it."