Crystal Palace are in talks with Manchester United over a loan move for Donny van de Beek; Netherlands midfielder has endured a frustrating spell at Old Trafford but Palace's transformed playing style under Patrick Vieira could help him flourish 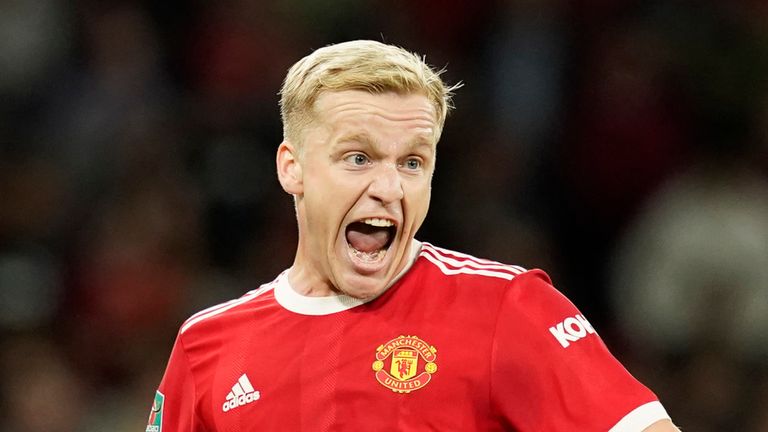 Donny van de Beek's arrival at Old Trafford caused no shortage of excitement. Darren Fletcher described him as a "bargain" at £39m. Ole Gunnar Solskajer talked up his "fantastic" quality. A giddy Rio Ferdinand addressed him as "Sir Donny" on Twitter.

The 24-year-old had attracted interest from a host of top European clubs while at Ajax, his outstanding performances during their run to the Champions League semi-finals in 2019 marking him out as one of the most exciting young midfielders around.

But his move to Manchester United has been a story of frustration and stalled progress. Van de Beek made only four Premier League starts in his first season. This time around, the Netherlands midfielder is yet to make one.

Why has not it worked out for him at Old Trafford? And could a loan move to Crystal Palace change his fortunes?

Van de Beek's biggest obstacle at Manchester United has been the presence of Bruno Fernandes.

Van de Beek played his best football for Ajax in the No 10 position, scoring and creating goals at a formidable rate, but by the time he arrived at Old Trafford in September 2020, Fernandes was firmly established as United's most important player in the position.

He has continued in the same vein ever since.

Fernandes has scored more goals (25) and contributed more assists (17) in the Premier League than any other Manchester United player since the start of last season. He has also played the most minutes (4,879).

Van de Beek, by contrast, has played just 582 minutes in the same time frame. A player who enjoyed major prominence at Ajax has had to settle for a peripheral role throughout his time at United.

There have been occasional flashes of his quality - most recently with his well-taken goal against Watford in November - but his attacking output has not come close to matching Fernandes' on the rare occasions he has been thrown into the side.

For many Manchester United supporters, there is frustration more effort has not been made to accommodate Van de Beek elsewhere in the team, but that always looked challenging.

There was no obvious role for him in Solskjaer's 4-2-3-1 formation - he is too offensively-minded to play in the midfield two, and not quick or powerful enough to occupy one of the wide positions - and interim manager Ralf Rangnick has now reverted to the same system having unsuccessfully trialled a 4-2-2-2 set-up following his appointment.

Solskjaer talked about Van de Beek and Fernandes complementing each other's qualities following the former's arrival at the club back in 2020 but 18 months on neither he nor Rangnick has found room for them both in the same team.

Tellingly, they have only started six games together in all competitions since the start of last season.

A loan move to Crystal Palace is not what anyone envisaged when Van de Beek completed his much-heralded move to Manchester United 18 months ago but given the circumstances, it could prove a sensible option for all concerned.

Van de Beek is sure to get more opportunities at Selhurst Park than he has at Old Trafford and, just as importantly, the side's style of play should suit him too.

Patrick Vieira has overseen a transformation since his appointment at Palace in the summer.

There have been dramatic changes to personnel, a raft of young signings lowering the average age of the team by two years, and the same is true of the way in which they play.

Palace, so direct and defensively-minded under Roy Hodgson, have shifted the emphasis to short passing and building from the back under Vieira. Their average share of possession has leapt from just 40 per cent last season - the third-lowest in the division - to 51 per cent this season - the ninth-highest.

Their numbers for passing accuracy, passing sequences and build-up attacks have also increased significantly, putting their approach more in line with the football Van de Beek grew up playing at Ajax.

It is potentially significant, too, that Vieira has switched to 4-3-3 formation this season, using a midfield three rather than a two.

There is no room for a No 10 in that system, of course, but with a dedicated holding midfielder stationed in front of the back four, Van de Beek would still enjoy plenty of attacking freedom on one side of the midfield three - just as Conor Gallagher has this season.

It is a role Van de Beek fulfilled at times during his spell at Ajax and it is one he could thrive in. For Crystal Palace, the hope is he could not just fit into their way of playing but enhance it.

Van de Beek would still need to prove to some he can handle the physical intensity of the Premier League but it is easy to understand why Palace are eager to make the deal happen.

Vieira has talked about wanting to add experience to his side - something Van de Beek can offer, despite his limited involvement at Manchester United - and the Crystal Palace boss also needs to add creativity and goal threat to his midfield.

So far this season, they have been almost entirely reliant on Gallagher in that sense.

The Chelsea loanee has scored seven goals and provided three assists in the Premier League but Palace's other central midfielders - James McArthur, Cheikhou Kouyate, Will Hughes and Luka Milivojevic - have no goals and only three assists between them.

Van de Beek can bring those offensive qualities in abundance. A lack of opportunity has done for him at United but his record at Ajax underlines his attacking threat.

Across his final three seasons in the Eredivisie, he scored 28 times and provided 21 assists. He ranked highly for chances created and final third passes completed, underlining his attacking influence, while only two players had more touches in the opposition box.

His performances in the Champions League provided further evidence of that penalty-box threat - Van de Beek scored against Juventus and Tottenham during Ajax's memorable 2018/19 campaign - and Vieira would seek to harness it again.

All the excitement that greeted his arrival at Manchester United has long faded, but a loan move to Crystal Palace could provide conditions ripe for Van de Beek to belatedly show his considerable quality in the Premier League.