Gary Neville less than impressed by overall team performance: "Man Utd are not very good, I have to say."; Man Utd up to fourth in Premier League after Cristiano Ronaldo hat-trick seals thrilling 3-2 victory over Tottenham 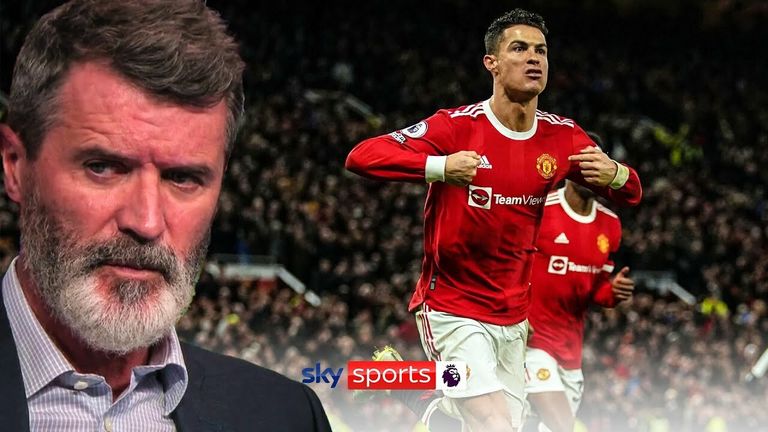 Roy Keane hailed Cristiano Ronaldo as fantastic and a genius as his hat-trick secured a 3-2 win for Manchester United over Tottenham.

Cristiano Ronaldo was labelled a 'genius' by Roy Keane after his spectacular hat-trick inspired Manchester United to a vital 3-2 victory over top-four rivals Tottenham.

A week on from United's humbling 4-1 Manchester derby defeat, Ronaldo delivered an emphatic response to rumours surrounding his absence at the Etihad by scoring his second Manchester United hat-trick to drag Ralf Rangnick's side up to fourth in the Premier League.

Ronaldo's first-half thunderbolt and close-range finish, either side of Harry Kane's penalty, gave United the lead at the break. After Harry Maguire's own goal saw Spurs equalise for the second time, Ronaldo had the final word as he completed a stunning hat-trick with a late towering header.

"Ronaldo looked angry today, he played with a lot of aggression," Keane told Sky Sports. "He's obviously upset with whatever happened last week, but he showed today what we have seen over the years.

"The guy's a genius; his three goals were fantastic. He brings so much to the team, why people think he cannot bring goals or value…"

FREE TO WATCH: Highlights from Manchester United's win over Tottenham in the Premier League.

Sky Sports co-commentator Gary Neville added: "The belief Ronaldo has in himself. He is in the twilight of his career, but he is absolutely sensational, a superstar of the modern game, one of the greatest of all time, and the greatest goalscorer of all time.

"Manchester United are not very good, I have to say. But there are moments in the game that are magical. The fans are buzzing because they've seen Ronaldo, they feel like they've seen something special."

Ronaldo's stunning treble saw him become the FIFA-recognised top goalscorer in football history as he took his career goals tally to a staggering 807 and counting.

"Forget about FIFA, that is a lot of goals," Keane added. "Scoring goals is the hardest part of the game. Some players don't even score in training! What more can you say about him? He's a genius!"

Neville continued: "Ronaldo has always wanted to be the greatest goalscorer. He's stubborn, so single-minded. He thinks he's the greatest of all time, and his record is just obscene.

"Those goals are in the top leagues in Europe - Portugal, Spain, Italy, the Premier League - the highest level."

Will Ronaldo be at Man Utd next season?

Ronaldo's latest inspirational performance raised questions over whether his talent would be there for Manchester United to call upon next season.

The striker's contract at Old Trafford expires at the end of next season and Neville believes the final decision will be made by Ronaldo and Ronaldo alone.

"There is this looming decision at the end of the season, that I know everyone thinks is coming," Neville said. "Is Ronaldo going to be at Manchester United next season? Should United keep him?

"It's not in their gift, Ronaldo will be making that decision, he has another year left on his contract, it is whether he wants to be here and whether this is a project he believes in." 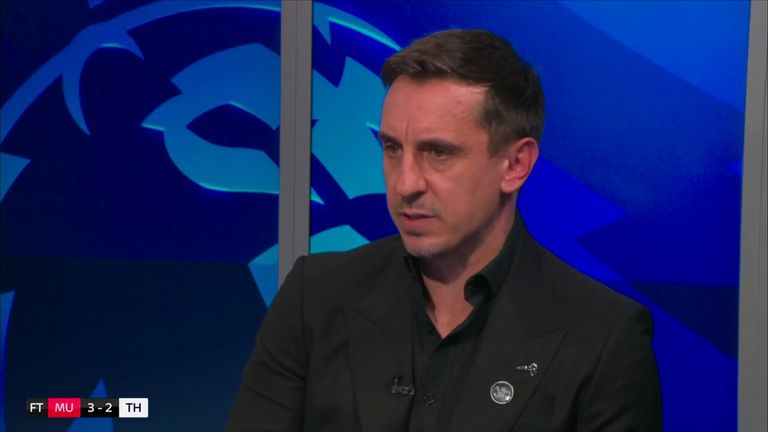 Gary Neville says Manchester United's biggest problem is not Cristiano Ronaldo and his future or lack of pressing - it's their 'awful' defence.

Keane added: "Games like tonight will help with his decision-making. For as great as he is, the next challenge for Ronaldo is to make this United team compete again for league titles. Ronaldo is a huge part of the rebuilding of the club.

"When he's producing like that, you need Ronaldo in your team. Ronaldo has been doing this throughout his career, he's been doing it for years. I think he can do it for another season." 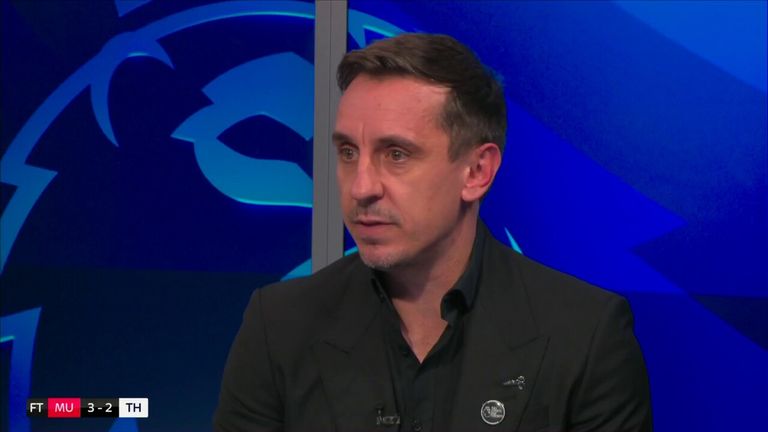 Despite Ronaldo scoring three in the win over Tottenham, Gary Neville admitted that Manchester United were not very good at all in the match.

Speculation surrounding the 37-year-old's future, and the criticism he has received for a lack of pressing may have dominated the agenda in recent weeks, but Neville believes United's biggest problem is their poor and inconsistent defensive displays.

"Manchester United are not very good, I have to say," Neville added. "They are just so inconsistent and unreliable. You can't really trust them. You haven't got a clue what's going to happen when they play.

"We are sat here and talking about Manchester United winning because of a special Cristiano Ronaldo performance, but it easily could have gone the other way where we are talking about a Tottenham victory, because that performance wasn't great overall.

"But they have got over the line and it was an important one today, obviously Arsenal are playing Leicester tomorrow, they are big favourites for top four, if United had lost today they probably would have been out of sight."