Jorginho jeered by Chelsea fans: But are the boos really justified?

Jorginho has been cast as the villain of the piece at Chelsea but he is not to blame for the team's struggles. Adam Bate takes an in-depth look at the stats and urges a reappraisal of the midfielder's contribution.

Booed on against Malmo and jeered off against Wolves, Jorginho's relationship with the Stamford Bridge crowd is not good. The missed penalty in the Carabao Cup final shootout didn't help and even his wonderfully struck goal at Fulham hasn't quelled the criticism. The Chelsea midfielder is seen as the epitome of all that's wrong under Maurizio Sarri.

In a recent interview with the Guardian, Jorginho sought to address that. "I certainly don't consider myself a golden boy," he said of the accusations that he's Sarri's favourite. He added: "Even if they think I am Sarri's man, I want to show them why Sarri likes me, that I am a good player and they are wrong to have that attitude towards me."

For Jorginho's critics, the statistic that he is yet to provide a single assist in his Premier League career seems to sum it all up. Endless passing but no end product. The man in the middle expected to make the play who doesn't actually create a thing. But delve just a little deeper and this picture of ineffectiveness isn't all that it seems.

As well as assists, Opta calculates expected assists. This measures the likelihood that a pass will result in an assist based on various factors. As a result, expected assists (xA) provide a deeper insight and allows the player who made the pass to be assigned a more appropriate level of credit regardless of what happens to the ball from that point onwards.

While Jorginho is not one of the 11 Chelsea players to have provided an assist for a goal this season, his expected assist total is 3.3. Only Eden Hazard and Willian can top that, with their numbers bolstered by being Chelsea's set-piece takers. Jorginho should not be judged because other players have been missing the chances that he has created.

For example, Watford's Abdoulaye Doucoure has six assists this season but the stats show that the quality of the chances that he has created for his team-mates have actually been inferior to the opportunities that Jorginho has fashioned. Paul Pogba has an amazing nine assists but his expected assist tally is only marginally superior.

The scale of Jorginho's misfortune in this respect is emphasised by looking beyond Chelsea. He is ranked as the 35th most creative player in the Premier League and not only do the 34 players above him have an assist but so do the 34 players below him on the list. He has by far the biggest disparity between expected assists and assists. In fact, he has actually played more through-balls than any midfielder in the competition.

It's just been bad luck. 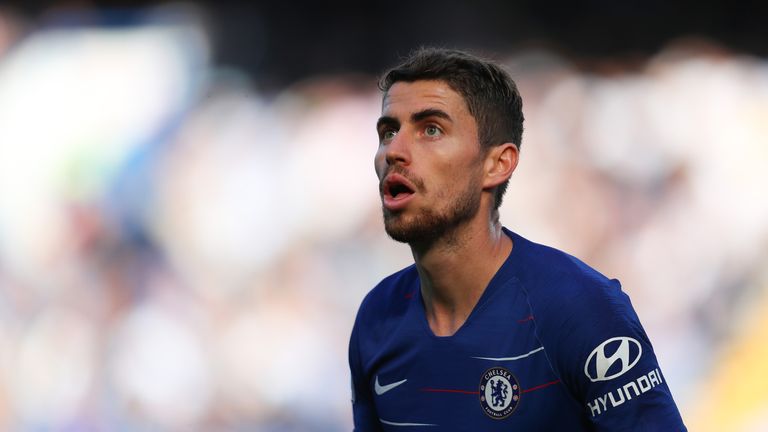 Of course, there is much more to the criticism of Jorginho than his assist tally. Providing the final pass is not the primary purpose of his role in the side. His job is to facilitate the build-up play from the back that allows Chelsea to pass through teams. That's the idea and in the early weeks of the season it was impressive how easily he was able to do this.

Jorginho has racked up some remarkable passing numbers against passive opposition. He completed at least 150 passes away to Newcastle in August and repeated that at West Ham the following month. He did it in the win over Crystal Palace too. Nobody else in the Premier League has completed 150 passes in a game this season - he has done it three times.

While there have been occasions when he has been targeted and teams have swamped the midfield in an attempt to stop him, broadly speaking, for all the criticism, Jorginho has been able to get the ball into the opposition half. He has progressed the play and got the ball to the feet of those players who can then make the difference for Chelsea in the final third.

Analysing the advanced metrics, Chelsea rank second only to Manchester City for the amount of distance that they move the ball up the field per passing sequence. There have been lots of those sequences too. Chelsea also rank second to City for sequences of ten or more passes and third for ones ending either in the opposition box or in a shot.

It's further evidence that Jorginho is helping to get his team-mates where they need to be. What he cannot be expected to do is to unlock things from there. That should be the responsibility of those ahead of him, but it isn't happening. Mateo Kovacic has not only failed to find the net so far but he has created only one clear-cut opportunity all season.

Marek Hamsik played that role for three seasons under Sarri at Napoli, scoring 30 goals and reaching double figures for assists in two of them. Chelsea need more creativity from midfield but they are not getting that from N'Golo Kante either despite him getting into advanced positions. The blend is not right and there's more to that than their pivot man.

Further forwards, Olivier Giroud and before him Alvaro Morata have obviously underperformed, while the wide forwards have frustrated Sarri at times too. When the Italian bemoans his players' preference for "individual actions" instead of moving the ball quickly, it's clear that he believes this is the area in which things are breaking down for his team.

Sarri attempted to make the point that the problems lie elsewhere in the press room after the Europa League win over Malmo last month. In Jorginho's absence, Kovacic had been deployed as the deepest midfielder and surrendered cheap possession in his own half twice in the early stages. For much of the first half, Chelsea struggled to build their attacks.

Boos greeted Jorginho's introduction but Sarri saw it differently. "In the first 30 minutes we understood why Jorginho is very important for our team," he said. "We were in trouble to exit from our half, on pressing. With Jorginho, it's easier I think. I hope that our fans will be able to understand that Jorginho, for us, is really a very important player."

It will need more than compliments from the manager who is perceived to favour him if he is ever to win over the Stamford Bridge crowd. Jorginho is so inextricably linked to Sarri's football that, like the coach, his reputation hinges on its success. But anyone convinced that Jorginho is the problem at Chelsea would do well to consider rethinking that.