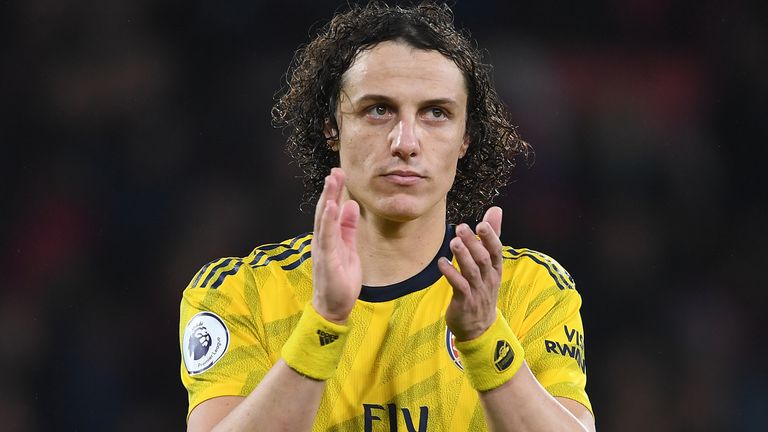 Chelsea head coach Frank Lampard says he will always respect Arsenal defender David Luiz despite making the decision to let him leave in the summer.

Luiz joined Arsenal on a two-year deal for £8m in the summer transfer window after two spells at Chelsea.

He was also a team-mate of Lampard in the Chelsea side which won the Champions League in 2012.

The Brazilian was made to train away from Lampard's first team after indicating he wanted to leave the club in August.

After initially dodging questions on his relationship with Luiz, Lampard said: "Maybe I was a bit harsh not to answer [original question] directly. What I don't want to do is make it a personal question going into a game against a player who I respect and played with.

"If you look at our defenders and the emergence of [Fikayo] Tomori, it has been a big plus for us.

"It was just a decision that was made and while I'm here there will be countless more of those.

"Again, I certainly wish Luiz well. He was part of a Champions League-winning team with me, he played with half a hamstring in the final - I know that. He got himself fit when he was under pressure with the injury. I will always respect that."

Lampard comes up against Mikel Arteta in his first home game as Arsenal head coach on Sunday, live on Sky Sports Premier League.

The Chelsea boss says a large factor in his performance will be the quality of his backroom staff, which includes Freddie Ljungberg.

"I think there are challenges daily, he would have seen that at Manchester City but observed it more as support for Guardiola," he added.

"Now it is his turn to make those decisions themselves. The years he had with Guardiola puts him in great stead so I don't think there is an issue there.

"You also need good people around you and I saw Arteta has got his staff together. He will rely on them and Guardiola relied on him, I certainly rely on mine."

Lampard confirmed Reece James is expected to miss Sunday's game with an ankle injury but Marcos Alonso could still play despite suffering a muscle injury in the Boxing Day loss to Southampton.

He added: "Marcos Alonso got a small muscle injury, hopefully he will be okay for Arsenal. Reece James probably won't, he's got an ankle injury and I think we need to look at it for a bit longer."