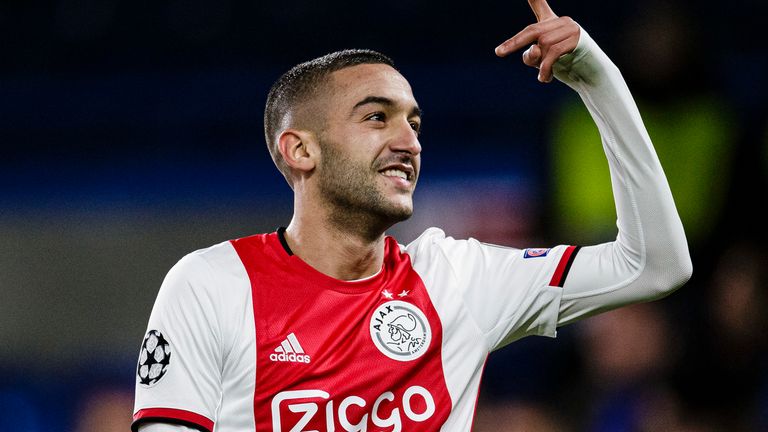 New Chelsea signing Hakim Ziyech is an 'absolute gem' and can light up the Premier League, according to Dutch journalist Marcel van der Kraan

Chelsea have agreed a deal to sign Ajax's Hakim Ziyech at the end of the season for £33.3m.

The fee for the 26-year-old Morocco international, who will see out the campaign in Amsterdam, could rise to £36.7m depending on add-ons.

Ziyech was one of Frank Lampard's top targets during the January transfer window but Ajax refused to sell one of their key players mid-season.

A Chelsea statement read: "Chelsea Football Club has reached an agreement with Ajax to sign Hakim Ziyech this summer.

"The move is subject to the player agreeing personal terms and he will remain at the Dutch club for the rest of this season."

Ziyech has eight goals and 21 assists in 30 games for Ajax this campaign, which has helped them to the top of the table.

He joined the club from FC Twente in 2016 and only signed a new three-year deal last summer.

Van der Kraan: Ziyech will be a hit at Chelsea

Leading Dutch football journalist Marcel van der Kraan insists Ziyech will be hugely missed by Ajax and is no doubt the Moroccan will thrive in a Chelsea shirt.

"He is vital for that team (Ajax). He has been absolutely turning the stadium upside down in certain games," Van der Kraan told Sky Sports News.

"His skills and technique are brilliant. His left foot is fantastic. He has scored cracking goals, [supplied] great assists his figures speaks for themselves.

Why it makes sense for Chelsea to sign Ziyech

Sky Sports News reporter Kaveh Solhekol offers his insight on Chelsea's pursuit of Ziyech as well as an update on the rest of the club's transfer dealings...

Frank Lampard has spoken about signing a long-term replacement for Eden Hazard recently. Ziyech is not as good as Hazard but he is getting there.

He was one of the best players on the pitch when Ajax drew 4-4 at Stamford Bridge in November and he put in two eye-catching performances in the Champions League semi-finals against Tottenham last season.

Ajax are used to selling their best players and it was always likely that Ziyech would leave this summer.

Chelsea would have preferred to sign him last month but Ajax wanted to keep him until the summer. They are top of the Eredivisie and still in the Dutch Cup as well as the Europa League.

Chelsea have been targeting wide players because Pedro and Willian are out of contract this summer.

Do not rule out Jadon Sancho also moving to Chelsea from Borussia Dortmund in the summer. Lampard has up to £150m to spend but clubs such as Liverpool and Manchester United also want Sancho.

It will now be interesting to see if Chelsea make a move for Ajax goalkeeper Andre Onana. He wants to move to the Premier League and there are question marks over Kepa's future at Stamford Bridge.