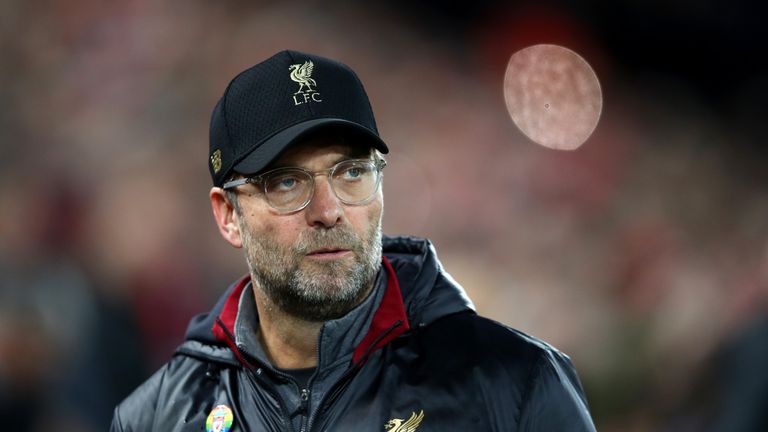 Jurgen Klopp expects Napoli to be tough opponents at Anfield

Jurgen Klopp believes Liverpool need to produce "something special" if they are to beat Napoli in the Champions League.

Liverpool are currently third in Group C and must beat Napoli either 1-0 or by two clear goals on Tuesday night to ensure qualification for the last 16 of the competition.

The Italians, who are now managed by former Chelsea boss Carlo Ancelotti, claimed a 1-0 win over the Reds in Naples in October, and Klopp is expecting another tight match at Anfield.

"It is a big task. Napoli did so well with Maurizio Sarri and now they have such an experienced manager in Carlo Ancelotti, who has come in," Klopp said.

"In the summer when we played them in a pres-eason friendly, he was already full of praise about the club and its staff.

"He was talking about little changes he wanted to make and that is really tough after a very demanding coach like Sarri, making changes and keeping the players behind you after being very successful.

"You can see the differences and they are so good. They do really well in the league.

"We all know the results we need. It is difficult because Napoli is good in possession but is good counter-attacking as well and a typical Italian team, good at defending.

"So it is a big challenge but it is football and if something special is possible, it is here."

In a recent interview Napoli president Aurelio De Laurentiis claimed he tried to sign Klopp while he was manager of Borussia Dortmund in 2013.

Klopp confirmed the talks occurred but played down suggestions he would be open to moving to Italy in the future.

"I still have a three-and-a-half-year contract so I am not sure if anybody wants me after that," said Klopp. "I like Italy and I like Italian food, but unfortunately I don't speak the language too well. I really like Mr De Laurentiis but he doesn't hide his information - he is quite chatty!

"I don't think I ever told anybody about that talk but he mentions it from time to time. I think he is really happy with his choices in the past - signing Maurizio Sarri was incredible.

"Now having Carlo back is outstanding. I think they are really happy with the coaches they have."