Virgil van Dijk is the best defender in the world, and is a shoo-in for the Premier League Player of the Year award, says Paul Merson.

The Dutchman has been one of Liverpool's outstanding performers this season, earning 16 clean sheets and conceding just 15 goals in 29 appearances as the Reds chase a first Premier League title.

He is favourite for the PFA Player of the Year award, and Merson waxed lyrical about the 27-year-old on Soccer Saturday, comparing him to Alan Hansen and joking that his kit does not need cleaning after a game, such is his calm dominance.

Asked if he will win the Player of the Year award, Merson said: "Yes, in my opinion. He's unbelievable. He's so good, it's scary. He's the best in the world, and I think by a long way, as a defensive centre-half.

"Some players just see Van Dijk and kick the ball away. I saw Theo Walcott last week, he went down the right, Van Dijk comes across, and he thinks: 'Uh oh…' and kicks the ball away. Normally, Theo would try to take someone on with his pace.

"I can't talk highly enough of him. He's Alan Hansen. You can put his kit back in the skip for next week, you don't even have to wash it, he can wear it again. He's absolutely different class." 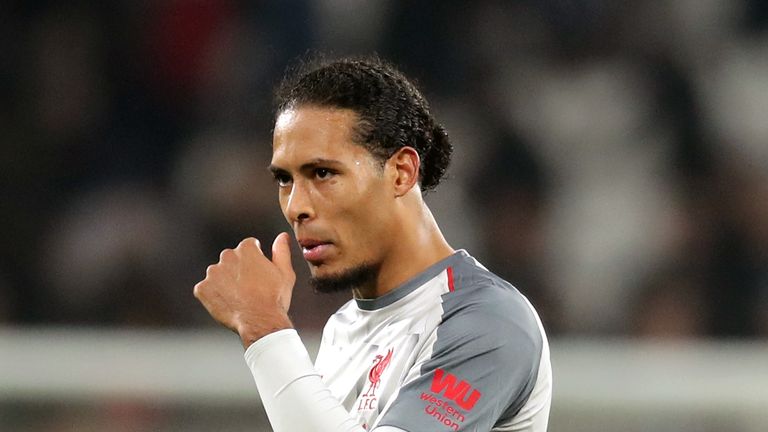 Some players just see Van Dijk and kick the ball away. I saw Theo Walcott last week, he went down the right, Van Dijk comes across, and he thinks: 'Uh oh…' and kicks the ball away.

Former Liverpool defender Phil Thompson also praised Van Dijk for his improved leadership, and insists the imposing defender is a nine or 10 out of 10 each week.

"This man is a colossus. In more ways than his 6ft 4in frame. The way he strikes that pose on that pitch. He is imposing," Thompson said.

"It's the way he glides through games, reading it. Last week, people were saying after half an hour that Dominic Calvert Lewin was having a fantastic game. He was inside the top pocket of Virgil.

"In the second half when it wasn't going Liverpool's way, he remonstrates with people, for example with Fabinho when he'd given it away. He was absolutely going for him.

"I've seen that even more in him, the leadership. He's set his standards high, and he maintains them. He's a nine or 10 out of 10 every week."