Aldridge on Curtis Jones: "The lad can be a star. I've always known that and now that he has been given a couple of opportunities by Jurgen things have come to fruition." 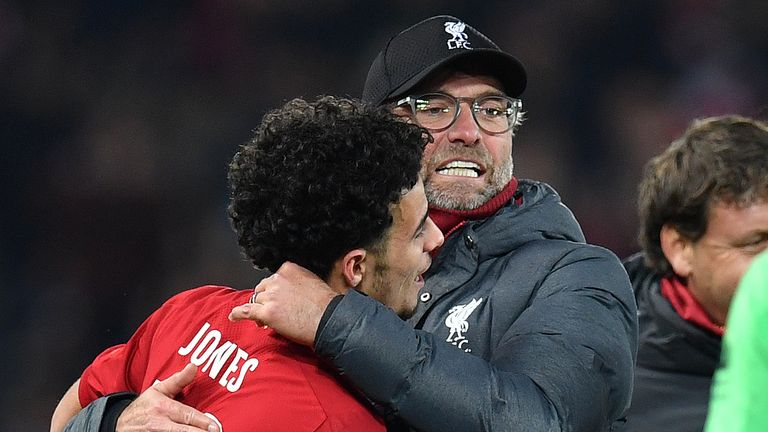 Liverpool youngster Curtis Jones has star quality and can save manager Jurgen Klopp a lot of money in the transfer market, says John Aldridge

Curtis Jones is treading the same path as Trent Alexander-Arnold and the homegrown talent can save Liverpool a lot of money in the transfer market, says John Aldridge.

Jones, who scored a stunning winner in the FA Cup third-round Merseyside derby tie against Everton, was instrumental in Liverpool's fourth-round replay win against Shrewsbury.

Aged 19 years and five days, the Scouse teenager became Liverpool's youngest captain in Tuesday's 1-0 win over The Shrews as the Reds set up a fifth-round tie against 2017-18 FA Cup winners Chelsea.

Former striker Aldridge, who was part of the last Liverpool squad to win the league, thinks Jones could be the ideal replacement for Adam Lallana and says the 19-year-old has a great future in the game.

"I've been watching Curtis for some years now since he was 15. And you could see - very much like Trent Alexander-Arnold - the potential that the lad had," Aldridge told Sky Sports News.

"He is just a quality footballer with natural ability and a good arrogance. He knows he is good and he does things the right way.

"But the lad can be a star. I've always known that and now that he has been given a couple of opportunities by Jurgen [Klopp] things have come to fruition.

"It looks like Adam Lallana is leaving at the end of the season after his contract expires. This lad will save the manager a lot of money because he can step right into the squad and you can always depend on him.

"He's got a fantastic future."

At the age of just 18, right-back Neco Williams made his fourth senior Liverpool start and was named man-of-the-match in the win over Shrewsbury.

The Wrexham-born youngster credits training with Alexander-Arnold and the rest of the first team for his rapid development despite his tender years.

"He's obviously one of the best right-backs in the world right now so every day I'm training with him I'm picking up little things each day and trying to bring it into my own game," Williams said of Alexander-Arnold.

"Each day as it goes I don't take for granted. I'm just grateful to be there every day."

Chirivella: My mentality has changed

At the age of 22, Pedro Chirivella was comfortably the eldest Liverpool player on the pitch against Shrewsbury.

The central midfielder, who joined the club from Valencia, is finally beginning to fulfil his promise under Klopp although his contract on Merseyside expires in the summer.

"Mentally I feel ready. I train every day with the first team and I feel I am getting closer to the level (required of a Liverpool player)," Chirivella said.

"I came (to the club) very early, when I was only 17, and maybe I was not ready yet. Now I feel I am getting there.

"I am getting very good feedback from the players. My mentality has changed and hopefully I can carry on." Jurgen Klopp sent messages of congratulations after staying away from Anfield as Liverpool's youngest-ever side beat Shrewsbury 1-0 in their FA Cup fourth-round replay.

The manager and his squad were controversially absent on their scheduled mid-season break but the German still maintained contact with the coaching staff and the players, with stand-in chief, U23 coach Neil Critchley, revealing Klopp was thrilled with the performance.

"The boss was in touch this afternoon with some words of advice and encouragement," added Critchley after former Manchester United academy graduate Ro-Shaun Williams' own goal settled the tie midway through the second half.

"We had a message from the staff that he is delighted with the performance and is buzzing. We have given him a game against Chelsea to look forward to.

"He just gives you total clarity, belief, play the Liverpool way, go for it. And that is what the first team do. This is us, this is how we play, this is what we stand for and you had better be ready for it.

"We played the game with real maturity. I was really impressed with how we stood up to the physical side of the game, first balls, second balls, much better than the Aston Villa game," added Critchley.

"Over 90 minutes we had the better chances and were just about the deserved winners."