Watch Leicester vs Arsenal live on Sky Sports Premier League from 11.30am on Sunday; Kick-off is 12pm

As Arsenal approach a pivotal run of five fixtures in 15 days in the Premier League and in Europe, Unai Emery sits down with Sky Sports to discuss the progress so far, the transfer window ahead and why Aaron Ramsey's replacement could come from within.

Unai Emery strides down a narrow corridor at Arsenal's London Colney training ground. He has just spent half an hour fielding questions in the adjacent press conference room, but before he returns to his preparations for Sunday's trip to Leicester, there are more media duties to fulfil.

We decamp to an office overlooking the entrance of the building. Emery is still in conversation with his English teacher, who praises his improving vocabulary following the latest round of questioning, but soon enough his focus is back on all things Arsenal. There is, after all, a lot to talk about.

It is 11 months since the Spaniard's appointment, and the last couple of weeks are probably a fair representation of his first season in charge. Arsenal were outstanding in both legs of their Europa League quarter-final with Napoli, even beating Watford in between, but those victories were swiftly followed by deflating defeats to Crystal Palace and Wolves.

The inconsistency has been a reoccurring theme. Arsenal are nine points better off than at the same stage of last season. There have been memorable wins over some of their closest rivals. But the recent setbacks have served as a reminder that the old flaws are not yet behind them. Arsenal are still defensively vulnerable, still prone to collapse.

Emery still has work to do, in other words, but the season could yet end on a high. Arsenal are one point off the top four with three Premier League games to go and face Valencia for a place in the Europa League final.

It is the next two weeks, not the last two, which will define their season.

'The team has made progress'

"Overall, I think it has been positive," Emery tells Sky Sports, now speaking in his native Spanish. "We are here today with the opportunity to achieve our objectives in both the Premier League and the Europa League, albeit knowing that it is going to be difficult - just as it has been since the start.

"I want us to be more defensively solid, of course, and we know we need to work on certain things, but the team has made progress. A season can help you to improve, to understand everything better and to continue with your process, and I believe that's where the club is now. We all want immediate results, but sometimes it requires patience."

Where patience is wearing thin, though, is with Arsenal's away form. Last weekend's defeat to Palace was a rare misstep at the Emirates Stadium, but Emery's men have been poor on the road all season. Their away record is worse than Watford, Palace or Leicester's. Sunday's trip to the King Power Stadium is another potentially awkward test. 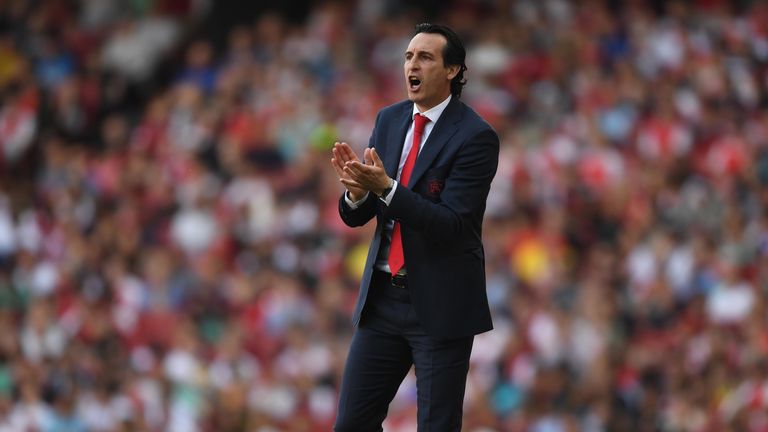 "Every game has its difficulties and we are going to come up against difficulties again on Sunday," he says. "Away from home, every team has its players and fans behind them, so you need the maximum level of motivation. You need to demand the maximum from yourself. You might still win without that, but you give yourself less of a chance."

Is that how he explains Wednesday's defeat at Molineux?

The game prompted more questions of Arsenal's mental fortitude, but Emery's diagnosis focuses on other factors.

"The first thing I would say is that Wolves drew with Manchester City at home, they beat Manchester United, they beat Chelsea," he says. "We played against a very physical team, well organised and with various players of a high level. We made errors, of course, but basically we lost because they are a strong team."

"I think it's about being competitive without necessarily playing well. Sometimes the other team will impose their idea on you. Being competitive means that when you can't find a way to win by outplaying your opponent, you are able to adapt and find another way to win or draw the game. That is another area in which I want this team to make progress."

It is a significant departure from Arsene Wenger's way of thinking, which perhaps explains why the squad are still adapting to it, but Emery wants Arsenal to learn how to win ugly.

It requires tactical flexibility. Emery's preference for making frequent changes in formation and personnel has frustrated fans at times this season, but it is all part of his philosophy. "We try to adapt to the demands of our opponents," he says, "to find the best way to approach each game with regards to our players, our system and our idea."

It is also why he demands such high levels of intensity. "In the Premier League, technical quality without physicality is not enough," he says. "City, Liverpool, Tottenham, Chelsea… All the top teams here are physical and technical. Arsenal need to be the same."

Emery's efforts to toughen Arsenal up are a work-in-progress. Premier League tracking data shows they are already covering more ground than any other side this season, but the manager wants more. He wants to see the same hunger and desire in every moment of every game and views the 4-2 win over Tottenham in December as a template to follow.

"My goal is that the team transmits energy, passion and the determination to win," he says. "That creates an emotional connection with the fans. It creates hope and excitement. It creates passion for what we are doing and makes the fans love Arsenal more. It's about making the fans proud and making the public want to watch Arsenal from the first minute to the 94th.

"We need to be more consistent with that. Against Tottenham, for example, the fans were really pumped up because it was a derby and because of what we were transmitting on the pitch, but I want us to be capable of creating that same feeling, that same passion and intensity, against any other team."

'We have to keep taking steps forward'

The challenge now is to rediscover those performance levels for the crucial run of fixtures ahead, but it won't be long until attention turns to the summer. There have been reports of a potential squad overhaul, with Champions League qualification seen as vital to the club's spending power, but Emery doesn't sound like a man plotting major changes.

"We have to keep taking steps forward and the club is working towards that," he says. "There could be a lot of movement in terms of signings and departures or there could be a little, but first of all I believe there is a good base for the team already here."

One player certain to depart, though, is the Juventus-bound Aaron Ramsey. Arsenal have had an ominous glimpse of life without him since he suffered a hamstring injury in Naples last week, badly missing his tenacity and quality in midfield against Palace and Wolves. Is Emery confident that the club will be able to adequately replace him?

"Yes, but there are also players coming through from the academy who are producing good performances and who could progress," he says. "We could replace him with a player from outside, or with a player who is already here who can grow like he did himself."

Emery stops short of naming any names - he does not wish to burden any young players with undue expectation - but his ambivalent attitude towards transfers reflects his passion for coaching. His determination to improve his players extends to every member of his squad. Earlier this week, he even launched an impassioned defence of the much-maligned Shkodran Mustafi.

"I take a lot of satisfaction from players progressing individually and the improvement of their statistics," he says. "I think there are a lot of players who have made progress this season. There's Matteo Guendouzi. There's Lucas Torreira. There's also the statistics of the goalscorers together - Laca [Alexandre Lacazette] as much as Auba [Pierre-Emerick Aubameyang]. They are both scoring an important number of goals."

Arsenal need to see more of that improvement in the coming week if the last two games are anything to go by. Emery knows what happens next could make or break his first season in charge, but he comes back to the same message as he discusses the challenge ahead. Arsenal's continued evolution, he says, is a process which needs time.

"When you lose, everything looks bad and you want to change everything, and when you win, it's the opposite. It's a case of being patient at some moments and finding a balance. You have to understand the things that still need to improve in victory, and also the things that are good even in defeat. You have to accumulate all that information to know how to move forward.

"Right now, I can say that our motivation is at the highest level to succeed in both the Premier League and the Europa League. My message to the fans is that they believe in us, and above all that they show their support towards los Gunners."

Emery delivers that last line with a smile. It has been a difficult week in a testing season, but his enthusiasm and determination are unchanged. He leaves our interview knowing his preparations for Leicester will stretch long into the night. Arsenal will need to be well prepared for what lies ahead.

Watch Leicester vs Arsenal live on Sky Sports Premier League from 11.30am on Sunday; Kick-off is 12pm