Ozil had been routinely linked away from the Emirates, but Unai Emery is 'happy' with how the German has responded to demands 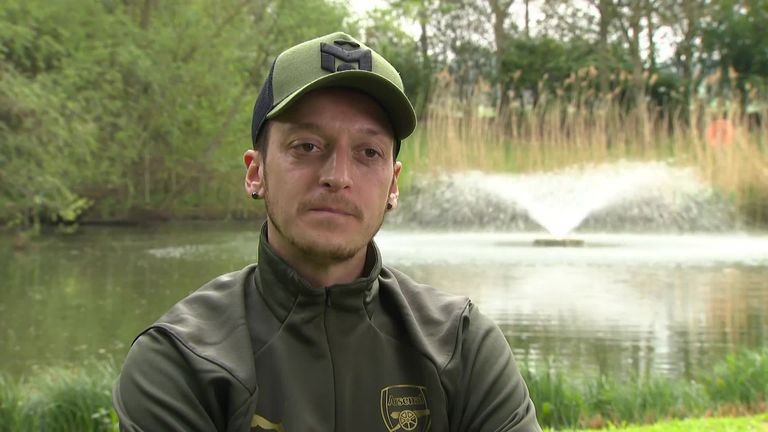 Mesut Ozil insists he wants to stay at Arsenal this summer

Arsenal midfielder Mesut Ozil insists he is happy at the club and wants to stay at the Emirates next season.

Ozil has two years left on his current contract but has been routinely linked away from Arsenal. However, Unai Emery recently said how happy he was that the German had responded to his demands of becoming more consistent.

In an exclusive interview with Sky Sports, Ozil said he is happy at Arsenal, but recognises the decision on his future is also down to the club.

Asked if he wants to stay, Ozil said: "Absolutely. I've got two more years on my contract. I don't know after that but I've got two years left.

Asked if he is happy, he said: "Yes. Why not? I'm 30 now, still got years in front of me, it's down to the club as well of course, but I've got two years here - after that I don't know what happens."

While admitting it is frustrating not being able to play in every game, Ozil insists he has no issues with Emery or his selection policy.

"No [issues with Emery]. Definitely not. There's always speculation, everyone inside knew that our situation is positive.

"It's frustrating [not playing]. I want to play in every game. Through injury I've missed games but that's football.

"As a footballer you always want to start games. The coach makes decisions which means you may not start but you have to keep going."

Ozil's future may depend on whether Arsenal are playing Champions League football under Emery next term, with the Gunners hosting Valencia in the Europa League semi-final first leg on Thursday.

They sit fifth in the Premier League, two points behind fourth-place Chelsea with two games remaining.

Ozil is in Arsenal's squad for Thursday's Europa league semi-final clash with Valencia.

The German missed the Gunners' 3-0 weekend defeat at Leicester with a bruised foot but when asked about the 30-year-old's Ozil's availability, Emery said: "We have a group of 20 players and he is in that group."

After their European exploits, Tottenham, Liverpool and Arsenal are back in Premier League action next weekend, live on Sky Sports.

Here's what is coming up on Sky Sports Premier League...