Kieran Tierney: Arsenal have not made a third bid, says Neil Lennon

"Two bids have been rejected... Arsenal may come again. I can't predict that." Neil Lennon says Arsenal have not returned with a new bid for Celtic defender Kieran Tierney.

Neil Lennon says Celtic have not received a third bid from Arsenal for Kieran Tierney.

Arsenal have had two bids rejected for left-back Tierney and reports in the British media have suggested the Premier League club have reopened talks over the Scotland international.

Lennon said Celtic were in a "strong position" to retain Tierney earlier in the week with the Gunners' latest bid of up to £25m including too many add-ons and being dependent on them qualifying for the Champions League, Sky Sports News understands.

"There is a lot of speculation - that is going to rumble on - and I am sort of at ad nauseam of answering the same questions over and over at every press conference," Lennon said, speaking at the opening of the Celtic festival. 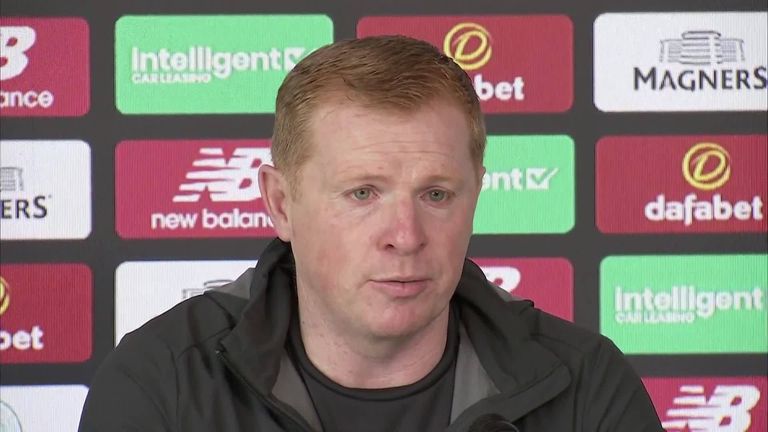 But Lennon said "never say never" when asked whether he remained confident Celtic would hold on to Tierney beyond the summer.

"If there is interest in him then other clubs may come in or Arsenal may come again," he added. "I can't predict that.

"At the minute he is working away in the background and it is difficult for him to keep focused at times because he is only human. But we are supporting him all we can." Kaveh Solhekol believes Kieran Tierney would like the opportunity to speak to Arsenal, but the north London club are not offering Celtic enough money up-front

The summer transfer window closes in Scotland on September 2, three weeks after the window shuts in the Premier League, and Lennon says the club are prepared for every eventuality.

"You always have a contingency plan for cases and work out other options if that worst-case scenario were to happen," he said.

"Yes, having that extra two or three weeks later on in the window might be beneficial."

We know how difficult, with the Premier League on our doorstep, it is to convince players to come.

"We know how difficult, with the Premier League on our doorstep, it is to convince players to come.

"But once they are in through the door they realise the magnitude of the club, the excitement and what coming here and enhancing their reputation can bring."