Podolski speaks to Sky Sports News' Paul Gilmour about Pierre-Emerick Aubameyang's future, why Mesut Ozil is a "great player" and turning down Tottenham

It's early afternoon in the southwest Turkish city of Antalya and the former Arsenal striker Lukas Podolski has finished a socially-distanced training session before setting up for this video interview.

In a wide-ranging 30-minute conversation with Sky Sports News, Germany's third most capped player (130) after Lothar Matthaus and Miroslav Klose offers engaging and interesting insights into:

Podolski returned to the training ground last week with his Antalyaspor team-mates in preparation for the Turkish Super Lig resuming, but it was the Bundesliga that led the way.

"We as Germans once again have shown our discipline, our mental strength and how we can work together just like in the penalties against England!" he says, with all the humour that made him a fans' favourite during his three-year spell in north London.

"I played a lot in Bundesliga and I'm happy to see it back. Nobody expected it but they have done it. Everyone is now watching how they do it."

In 36 degree temperatures, Podolski takes his spot in the shade before highlighting why it may not be as straightforward in Turkey despite plans to resume in mid-June.

"They gave a date but it's not fixed. Let's see (what happens) because there is coronavirus in a few clubs. We are ready and following the rules but all we can do is wait."

Alongside his family and fitness commitments, Podolski - who will turn 35 next month - has been using the time to take a hands-on approach with his business interests. He owns a number of kebab shops, an ice cream parlour, and a pub.

"At the moment, I have time to sit down and speak with my partners and create some new flavours and decide what we can do better," he says.

"At the beginning, it was a little strange because we had to close it but after a couple of weeks, we opened again and it's going well with the ice cream and kebabs.

"People love ice cream, even in 50 years they will eat ice cream. It's the same with kebabs. In Germany, it's really popular and I have a connection to the Turkish culture and people.

"It looks strange to people that I have kebab shops. Others do wine or collecting cars!"

Born in Poland, Podolski moved to West Germany at the age of two. He prides himself on being a man of the people and often travelled by tube when living in London.

"I don't want to live like an a****** to just come and play and go. I want to be remembered as a good guy, as a player who always gave 100 per cent for the club, the city and the fans. To learn about the culture is important.

"I like fast cars as well but I always felt it was important to connect with the city. I grew up on the streets. I'm a normal guy and that's why I don't always have to take out my car."

He joined Arsenal in 2012 as Robin van Persie was leaving the club for Manchester United. Did that lead to pressure to fill big boots?

"I don't feel stress when I play any game or training or when I join a club. I'm just confident and this was the same at Arsenal.

"When I look back at my stats per game, I think it was OK. I had nearly three fantastic years at Arsenal. It was the first time I was out of Germany but I enjoyed playing at such a big club." He's like a father, very humble, he's very respectful, he's very calm and this is what a club needs. He never got loud or stressed. What he did for Arsenal, I think he's the main guy.

It's clear from the chat that Podolski still has great affection for his former club so he has naturally been disappointed at how recent years have gone.

"A club like Arsenal has to play every year for the Champions League. Of course, the Premier League is hard and even against the smaller teams. It's not like other leagues with two or three teams fighting for the title."

Shkodran Mustafi told Sky Sports News on Monday that Mikel Arteta had united every member of the squad in the week Unai Emery suggested Podolski's former international teammate Mesut Ozil should "analyse his attitude and commitment".

"There is no discussion for me, he is a great player," says Podolski of Ozil. "Sometimes there is a problem with a coach or there could be an injury, things that happen in football and you have to deal with this situation sometimes.

"I think it's a better fit than before (Ozil and Arteta). They have played together and know each other. Ozil is back on the pitch and the games I have seen he is doing much better than with the former coach.

"Sometimes you have a coach and you can not deal with him. He can have a different view of football. Arteta is back at Arsenal and you see the team is much more organised, more fight and discipline.

"I hope they can build a good team for the next couple of years. They can do it but they have to work together."

One potential problem for the club is a fresh link to Real Madrid around striker Pierre-Emerick Aubameyang.

"When you have a fantastic season like he had, many clubs are interested. When a player has a wish to play for a big team or a dream to play in Italy or Spain, or like Aubameyang and his link with Real Madrid...

"If he has a dream to play for this club when he's young, then why not? As a player, you have to take this chance to play for a club like that. Of course for Arsenal, it'll be a big loss if they have to sell him but this is the business of football. 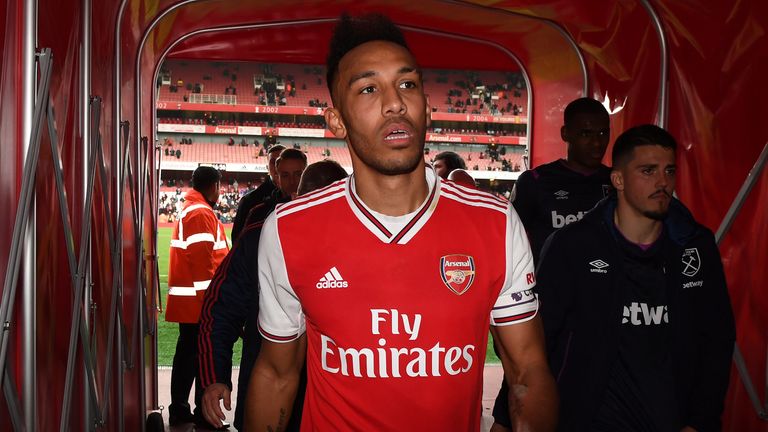 He had a fantastic season with a good scoring record, but you can make money on a player, sell him and you can invest in new players.

Podolski on whether Arsenal should sell Aubameyang

"My opinion is you lose a big player, he had a fantastic season with a good scoring record, but you can make money on a player, sell him and you can invest in new players. For a player like me or Aubameyang, when a big club is calling, you always want to have this dream."

Podolski had warm words for his former manager Arsene Wenger.

"He's like a father, very humble, he's very respectful, he's very calm and this is what a club needs. He never got loud or stressed. What he did for Arsenal, I think he's the main guy.

"I still have a good connection to him and I think he's one of the top five to 10 coaches in the all-time history of football."

During his time at the Emirates, Podolski endeared himself to Arsenal fans when he responded to transfer speculation linking him to bitter rivals Tottenham by revealing "hell would freeze over" before that move would happen.

He also taunted Spurs after their final game at White Hart Lane by posting images of Arsenal celebrations at the venue.

"They never called me again after that! A lot of players are always saying something like a snake but I said this and then it was finished!

"From that point on, they cancelled my number from their phones. When I was in the stands at the old Tottenham stadium, this was the next sign."

He has fond memories of those "special" derby games during his career.

"In Germany or other countries, they try to make the derby games more soft. Leave it like it is, like it was 10, 15, 20 years ago. There has to be fire and duels on the pitch. This is something special.

"I like it because at some point you stop playing football and I will miss it. I like to be connected with the fans."

International football was also kind to him as he became a World Cup winner and made 130 appearances for his country.

He had a dream send-off as he scored a long-range winner against England in his final appearance to inflict a first defeat for Gareth Southgate.

Podolski has yet to decide what he wants to do after he ends his playing career but he will have time to consider the next step with a kebab and some ice cream as the kid "from the streets" reflects on a memorable career.