Bukayo Saka set up Alexandre Lacazette's winner for Arsenal against Brighton and won the man-of-the-match award for the second time in four days; youngster limped off with an apparent injury but Mikel Arteta does not think it is serious

Mikel Arteta has moved to cool the excitement surrounding Bukayo Saka after the 19-year-old delivered another eye-catching performance in Arsenal's 1-0 win over Brighton.

Saka produced his second man-of-the-match display in four days as Arsenal followed up their 3-1 victory over Chelsea on Boxing Day with a hard-fought win on the south coast.

The academy product, who scored Arsenal's third goal against Chelsea, provided the assist for Alexandre Lacazette's winner at the Amex Stadium and caused Brighton problems throughout, further underlining his status as one of the country's best young players.

But Arteta is determined to avoid overburdening Saka with expectation and says he must be given space to continue his development.

"I would like everybody to be cautious, let him be and let him develop," said the Arsenal manager.

"I think he's having the right progression. I think he has the right people around him in his house, in his entourage.

"And he's got the right team-mates as well to support him all the time, giving him confidence and keeping his feet on the floor.

"Then hopefully we can be the right coaches around him and the right club to see the player that he can be in the future."

Saka limped off in the closing stages at the Amex Stadium but Arteta does not believe his injury is serious. "He took a strong challenge, but hopefully he will be fine," he said.

The Spaniard was also pleased with how the youngster recovered from a difficult first half. 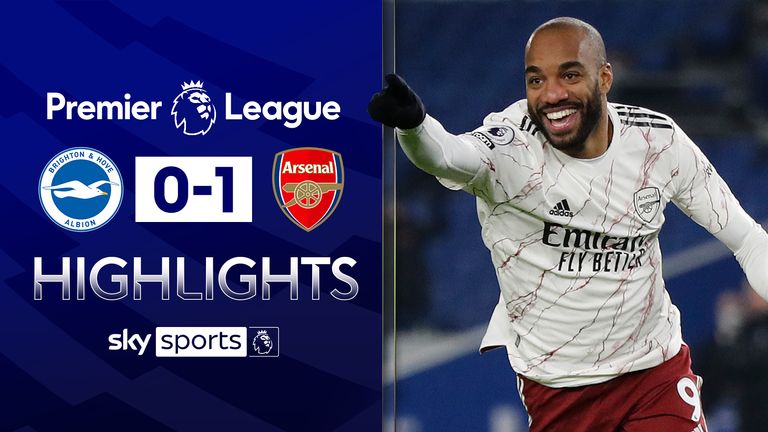 "Today he had a difficult game in the first half because we weren't using certain moments to generate advantages for him and other attacking players in the right way," said Arteta.

"So, the game becomes really difficult all the time, back to goal against a back-five in a low block.

"In the second half, the moment we started to play different balls and attack in a different way, we found more freedom, more space, and more capacity to unlock the situations and the block.

"We created four or five big chances and he was involved in most of them."

'Lacazette stepped up in difficult moment'

Arteta was full of praise for goalscorer Lacazette, who found the net for the third successive game just 21 seconds after coming off the bench at the Amex Stadium.

The Arsenal boss revealed the Frenchman had not been fit enough to start the game due to a back problem and praised the attitude he has shown to help pull the side out of their rut.

"I think this is what all the managers dream of, to bring people from the bench and win you the game like he's done tonight," said Arteta.

"I think he's been in really good form in the last few weeks. He's been scoring goals. He's full of confidence. Today he had a sore back, so he could not start the game. But he came on and won the game for us which is massively important.

"We need big players and senior players to step up in these difficult moments and he's doing that for sure.

"Front players need as well their team-mates to support them and put them in situations like he had today as often as possible.

"But at the same time they have to step up and create these opportunities themselves. I think Laca is working very hard.

"Since I've been here his work has never been an issue. His goalscoring record could improve but it is improving because he's so willing to do it for us also."