Benjamin White speaks to Sky Sports News ahead of Crystal Palace's visit to Arsenal on Monday Night Football and admits he did not watch football as a kid, and does not really know about Patrick Vieira, despite wearing his No 4 shirt 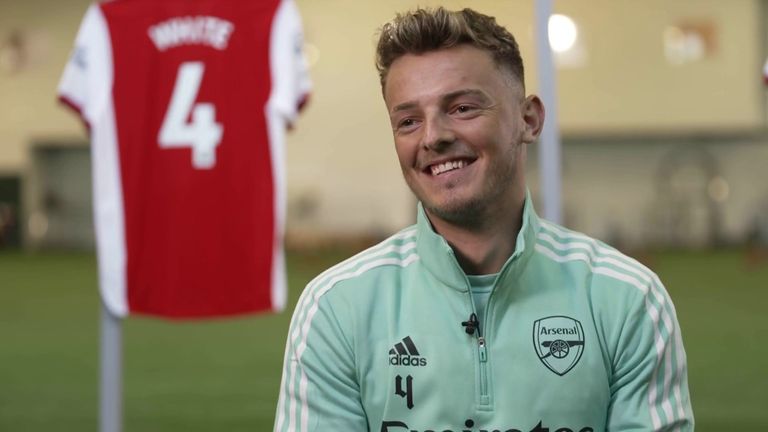 Arsenal defender Benjamin White tells Sky Sports News that his name is in fact not Ben, despite the common misconception

Arsenal's Ben White actually prefers to be called Benjamin - and he admits he does not really watch football.

"You can call me whatever you want, I just might not reply," he joked, after it was pointed out to him his name is Benjamin on some social media and Ben on others, "but my name is actually Benjamin".

The £50m summer-signing from Brighton, who is beginning to find his form under Mikel Arteta, says he did not watch games as a kid - he just loved playing - and he prefers to spend his time doing other things.

Whether that is helping him at his new club it is too early to say - White is still settling in - but the 24-year-old insists it allows him to at least give his full attention to training.

"Football is so intense," he told Sky Sports News ahead of the visit of Crystal Palace and their new manager - the former Arsenal great Patrick Vieira, whom White admits he knows little about.

"You come in every day giving 100 per cent. All I want to do is go home and not think about it, then come in in the morning fresh and ready to give 100 per cent again.

"I watch myself for analytical reasons. I watch England, maybe, but I'm always busy doing something. I wouldn't just sit down and watch a game.

"I didn't ever watch football when I was younger. I still don't now. I just loved the game, I was always playing it, never watching.

White was thrust straight into Arteta's plans from the first game of the season; a hellish opener at promoted Brentford that saw them lose 2-0 and White struggling for one of their goals.

But he has made four further starts since, having recovered from a spell out with Covid-19, and helped the Gunners secure clean sheets in three of those games.

"The first game didn't go very well. Then I got Covid and missed two games. Then we were straight back in and that's where we picked up," he said.

"I don't think adapting to a big club (was a reason for my slow start). It didn't feel like a big club when I came here. Everyone is so nice and welcoming.

"Clean sheets are the aim for the team. I don't think it's just the back four and goalie that keep a clean sheet - it's the whole team. It's come into my game since I've been at Arsenal - the love of defending and keeping a clean sheet."