Mousa Dembele reveals why he left Tottenham for Guangzhou R&F

'Everything (at Guangzhou) is similar to Tottenham. The group atmosphere is very comparable.'

Mousa Dembele decided to leave Tottenham for Guangzhou R&F in the Chinese Super League for "something different" and because he is "open-minded".

The 31-year-old Belgium international midfielder, who played 250 times for Spurs over six-and-a-half-years, swapped the Premier League for Asia in January.

Tottenham sold Dembele midway through the season to recoup a transfer fee, reported to be in the region of £11m, as his contract was set to expire in the summer.

Quizzed on why he decided to leave Spurs, Dembele said: "I'm a social guy I think. I'm not too serious. I don't like to be too serious. I think off the pitch I can have a laugh with everyone.

"I like to see myself as open-minded. That is one of the reasons I wanted to come to China. I wanted to see something different.

"I wanted to have a different experience in life. I heard already there is good food in Guangzhou. I will try this a lot. I think my family will enjoy it as well here." 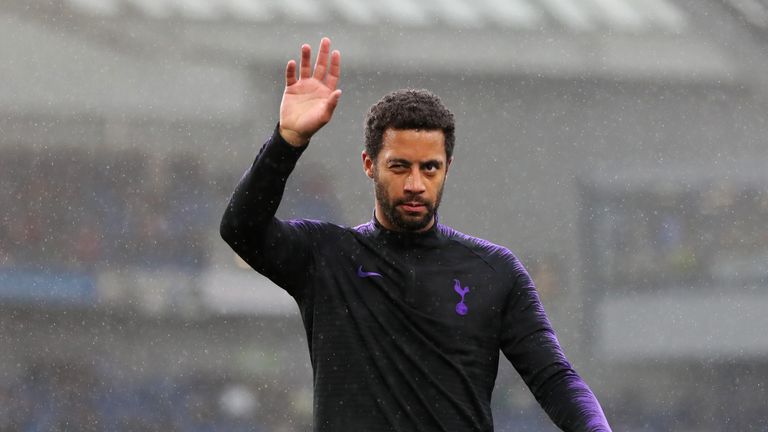 I wanted to have a different experience in life. I heard already there is good food in Guangzhou. I will try this a lot. I think my family will enjoy it as well here.

Dembele also discussed how his life is settling in China, learning the language and compared the dressing room at his new club to the one at Tottenham.

"I feel good - everybody is very welcoming," he added. "This is a very important thing if you are new in a club, people try to make you feel very comfortable from the start.

"I think everybody is doing this and it's a good feeling for me and it will make it easier to adapt and to feel at home as quickly as possible.

"I have a small application on my phone that I look into and try to understand some words. Hopefully in six months I will know some words already. I think I know already some words. There is 'ni hao', 'ni hao' is okay.

"I like the fact there are a lot of jokes on the pitch but when it has to be serious, they are serious, everyone is serious. Between everything, the exercises, the people, the jokes, it's what I like as well.

"The jokes and everything is similar to Tottenham. The group atmosphere is very comparable with Tottenham. I like this because in Tottenham it was a good group, everyone was very good together.

"I feel as though here that all the players have a good mentality I think."