Will Heung-Min Son step up for Tottenham again in Harry Kane's absence?

Tottenham face Huddersfield on Saturday from 11.30am on Sky Sports Premier League; kick-off at 12.30pm

Tottenham are battling for a top-four finish in the Premier League and challenging for the Champions League, but they look set to be without striker Harry Kane for the rest of the season. How will Spurs cope without Kane and will Heung-Min Son step up again his absence?

From a lack of transfer activity to delays over the opening of their new stadium and speculation surrounding Mauricio Pochettino's future, Tottenham's season has not been without its difficulties. But will a second ankle injury to Harry Kane prove to be the toughest obstacle so far?

It looks likely that Kane will miss the rest of the campaign after suffering an injury from a challenge by Fabian Delph during Spurs' Champions League quarter-final first-leg win over Manchester City on Tuesday.

It is Kane's fifth ankle injury in three years and second in 2019. Earlier this year he missed seven matches in January and February and then returned ahead of schedule to face Burnley.

An early return looks to be out of the question on this occasion, so Spurs are going to have to close the season without Kane.

That might not prove too troublesome on Saturday as they welcome already-relegated Huddersfield to their new stadium, live on Sky Sports.

However, then they face Manchester City in back-to-back away games in the Champions League and Premier League before home fixtures against Brighton and West Ham, a trip to Bournemouth and a final-day home clash against Everton. In addition there could also be a two-legged Champions League semi-final against Manchester United or Barcelona, and the final on June 1, if they get that far.

While Kane's injury could have a big impact on Tottenham's chances of success over the next month, they have shown they can cope without the striker already this season.

In fact, their win percentage without the England international is higher (66.70 per cent compared to 61.50 per cent) and they have scored exactly as many goals (1.9) and had exactly as many shots (13.6) with or without Kane.

That is, of course, a small sample size, and there is no doubt that Spurs would prefer to have Kane in their side. His absence means added goal-scoring responsibility for others in the team, most notably Heung-Min Son, who scored the winner against City in midweek after Kane's exit.

"He ticks all the boxes," said Pochettino afterwards. "If there is one player who deserves to score, it is him."

When Kane missed seven matches earlier this year it was Son who stepped up with four goals in four games, despite having just returned from the Asian Cup. Of Son's last seven goals for Tottenham, six have been scored without Kane on the pitch.

Son's stats when he has played with and without Kane this season show how he impacts games in different ways.

Son gives Spurs' forward line a different dimension. While Kane provides a strong focal point and holds the ball up well, Son can be more direct on the ball and adds extra speed, although he tends to do less of his work in the penalty box.

"Son runs in behind and when he gets it you won't catch him," said former England defender Stuart Pearce on The Debate. "You have a chance of catching Kane, Dele Alli and Christian Eriksen, but you can't catch Son.

"I think every team needs a player running behind and hurting the opposition with genuine pace."

It definitely changes them. With him they play in different shapes and when he didn't play they had other shapes. In a way it makes it more difficult.

When Kane was out last time, it wasn't just Son who filled the void as Pochettino rotated his attacking options.

During Son's absence at the Asia Cup at the start of 2019, Pochettino went with Fernando Llorente up front against Fulham and Crystal Palace and then Lucas Moura and Erik Lamela in attacking roles against Chelsea.

Win a free fourball with GOLFNOW

Win a FREE 4-ball giveaway throughout the month of April - a winner a day!

When Son returned he played with Llorente against Watford and Leicester, then it was Lucas up front against Newcastle, and Lucas and Son leading the line against Borussia Dortmund.

Llorente hasn't started a game since Kane returned from injury but he could now be more involved again.

However, it's Son who will be expected to fill the void left by Kane's absence.

"There's no pressure for him (Son), there's a pressure for us and the team to try and deliver our best job and win games. I think for Sonny, Fernando, Lucas, Christian, Dele it's the same pressure and responsibility.

(For me, football is about collective and keep in the same way of thinking to improve and increase the level, it is going to be tough because there are going to be some decisive games to be in top four next season and go to next stage of Champions League." 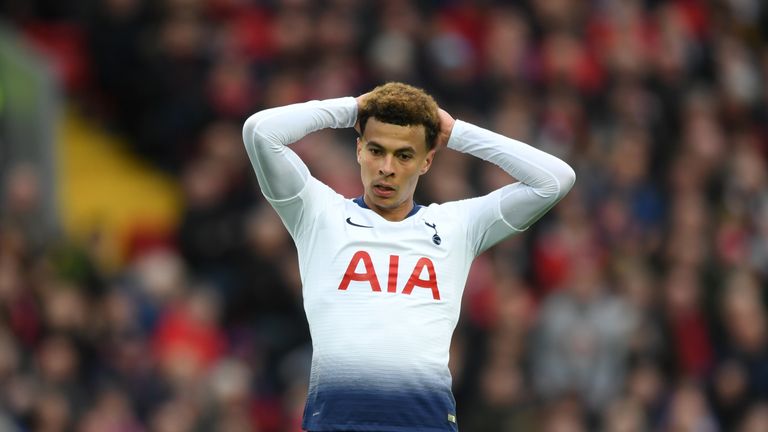 "It's interesting because it definitely changes them. With him they play in different shapes and when he didn't play they had other shapes. In a way it makes it more difficult. But for me it's about how we play, how we solve the challenges they give us."

"I think he (Kane) is one of the best players in the world, so he's very important for us. I think the players know what is going to happen. Of course Harry is very important, but other players are ready for their chance. I think it's not just me, everybody should be ready and fight for this chance. We are good enough and I trust every single player so I am not worried about it."

The pundit view: Danny Murphy on The Debate

"Son has wonderful attributes to play as a striker. His energy is unbelievable, he can run behind and link the play. He is not quite the finisher Kane is, but he is not a bad substitute to have in that position. You are also not restricted if you play him there whereas if you play Llorente you might be as he can't do the running in behind."