Harry Kane scored the only goal as Tottenham beat Real Madrid 1-0 in the Audi Cup semi-finals on Tuesday.

The England striker took advantage of a mix-up in the Real defence to open the scoring after 22 minutes.

Despite several further opportunities to extend their lead, Spurs withstood some late Madrid pressure to take their place in Wednesday's final against hosts Bayern Munich following their 6-1 win over Fenerbahce.

How Spurs made Audi Cup final

Fifty-eight days after their painful Champions League defeat in Madrid, Mauricio Pochettino's side - including Danny Rose, who many expected to leave the club this summer - made it through to another final after this impressive display against Real.

The Premier League team dominated proceedings before the break against a Real team - minus unsettled forward Gareth Bale, left back home in the Spanish capital - perhaps still in shock after Saturday's 7-3 drubbing at the hands of city rivals Atletico Madrid.

It came as little surprise when Spurs, for who club-record signing Tanguy Ndombele impressed in midfield, took the lead midway through the first half, although the nature of the goal will have caused raised eyebrows among the Real hierarchy.

A stray pass from of all people Eden Hazard - who joined Madrid from Chelsea in July in a deal that may reportedly rise to a club-record £130m - caught out Marcelo, who in trying to keep the ball in near the left touchline, only succeeded in presenting Kane with a clear run on goal.

Faced with the onrushing Keylor Navas, the forward kept his cool to dink the ball over the Real No 1 as Spurs deservedly led at half-time.

Both sides made the now customary raft of changes thereafter, with Hazard - who disappointed at the Allianz Arena - eventually hooked in place of Isco with 10 minutes to go.

However, it was another substitute, Troy Parrott, who came closest to scoring the next goal, only for the 17-year-old striker's late shot to strike the inside of the post.

Poch: We still need to improve 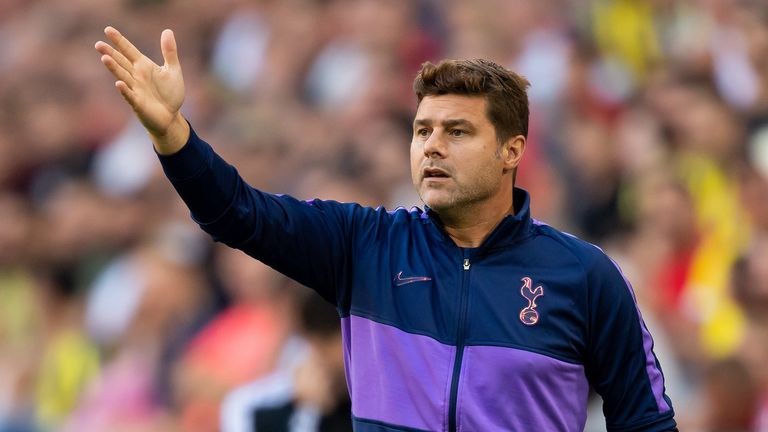 Tottenham manager Mauricio Pochettino: "I think I am happy as we've played three tough games against Juventus, Manchester United and now Real Madrid. It's a very unique pre-season for us, different pre-season.

"I think we are doing well but the most important is the feeling we are getting from the training sessions and games as it's so competitive. Of course we still need to improve and hope in the next few weeks we will be ready to compete at our best."

With last season's first-choice right-back Kieran Trippier having recently joined Atletico and his back-up - Serge Aurier, currently out with a hand injury - there was a void to be filled on the right-hand side of the Spurs defence.

So step up defender Juan Foyth, a real favourite of Pochettino's after his breakout Premier League campaign last season.

The Argentine manager likes his compatriot's versatility and cool head, so had no hesitation asking him to fill in at right back against Madrid.

The 21-year-old did not let his boss down in the first half, turning in such an assured display that his name must surely now be inked in for the role when Spurs begin their league campaign at home to Aston Villa next month.

All is not rosy in Eden's garden

By all accounts, it was Real's returning head coach Zinedine Zidane who made the acquisition of Hazard the club's No 1 transfer priority this summer.

However, if some reports in the Spanish press are to be believed, then the Belgium international arrived for pre-season training at his new club a full stone heavier than last season.

Judging by this off-colour display, though, Madrid's latest Galactico signing will need to improve before he gets back to the sort of form that used to wow the crowds at Stamford Bridge.

Spurs face Bayern in the Audi Cup final on Wednesday night, before hosting Inter Milan in the International Champions Cup on Sunday afternoon.

The north London club then begin the Premier League season by entertaining Villa at the Tottenham Hotspur Stadium on Saturday, August 10, a match you can see live on Sky Sports Premier League.