Jose Mourinho: Tottenham want to play but must wait for right decision

In an exclusive chat with Geoff Shreeves, Jose Mourinho said: "Since the moment Bundesliga started... I think it is the most difficult moment for us, because we want to play. It is hard to see other countries playing football and we don't do it" 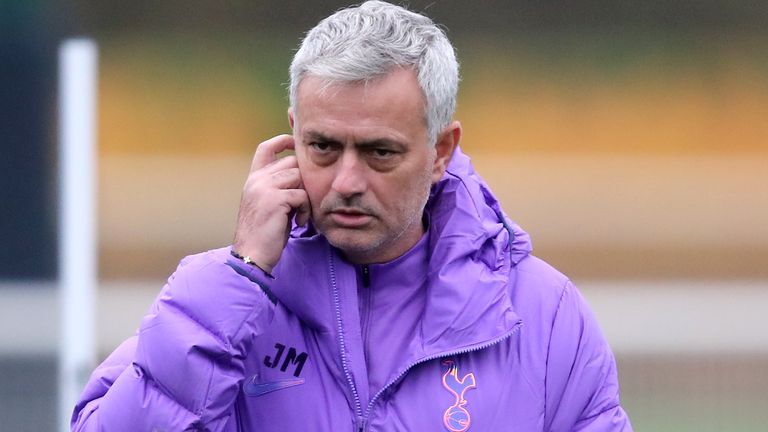 Speaking to Sky Sports, Tottenham manager Jose Mourinho says his side want to play football again, and watching other leagues return is only making it harder

In an exclusive interview with Sky Sports, Jose Mourinho reveals Tottenham's desire for a football return, how the transfer window could change, and living with his staff under lockdown.

There has been no Premier League football for two-and-a-half months, but signs are pointing towards a return to action with clubs starting to train in small, socially distanced groups.

Tottenham are among those back to work at Hotspur Way and Mourinho is happy to welcome back his players, although seeing other leagues such as the Bundesliga already playing games has made Spurs more eager to return.

In an exclusive chat with Geoff Shreeves on The Football Show, Mourinho said: "Honestly, since the moment Bundesliga started, the Portuguese league and Spanish league announced a date to start, I think it is the most difficult moment for us, because we want to play. It is hard to see other countries playing football and we don't do it.

"I always loved, and always tried to make my players love the Christmas period, where instead of being sad, we were always happy to give people what people love. In this moment we are feeling a bit of the opposite. 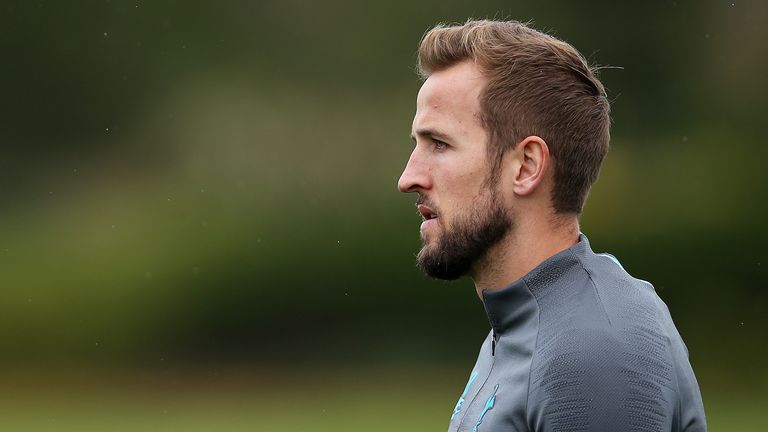 Mourinho says all of his players have recovered from injury, including Harry Kane and Heung-Min Son, but everybody will struggle to play to their maximum due to the lack of match time

"German professionals are giving the world something that they love, and we are not, and we want to play, but of course we are respectful of the authorities and we trust them and the Premier League. We just have to wait for the decision; when they tell us the moment to start, we want very much to do it.

"Obviously it was an amazing feeling for everybody to be back on the green carpet, because I think we all miss even the smell of it!

"There was a period where we were starting training and 9am and finishing at 5pm, because by having players train individually, we had to have different slots. Some people were coming at 10am, 11am, 12pm, 1pm, 2pm, 3pm, 4pm, 5pm.

"To be honest, my boys in the staff were really, really tired for a certain period. You could find a funny picture of me riding a bike, because we had the pitches at a huge distance, and without a bike I couldn't control every training session at the same time!"

'Normal to have different transfer market' 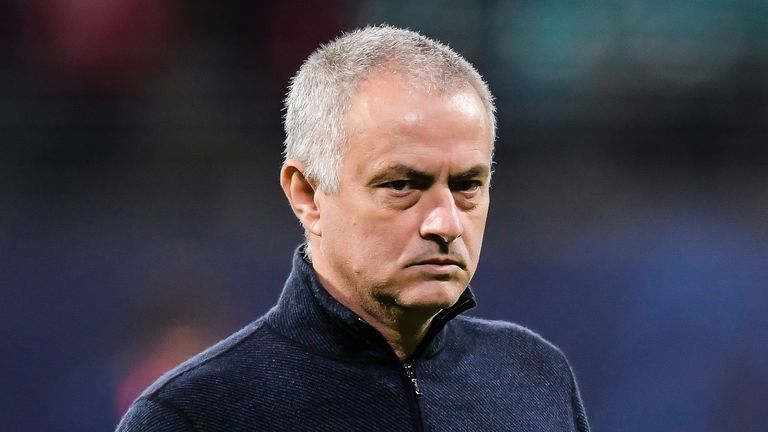 Questions have also been raised over the future of the transfer market, with many clubs suffering financial losses during the current football suspension and the regular start dates also being pushed back.

But while Mourinho admits transfers are far from his mind, he is prepared for a changed market once new dates are announced with huge sums for players not expected to be the norm.

"But you ask me, and I'm not going to run away. I think it is normal that you are going to have a different market. I don't see the world, and especially the football world, ready for some crazy numbers that we are used to having, and some crazy investments that sometimes some clubs and some leagues are used to doing.

"But my first question after that is: 'When will the transfer window be?' Because I don't think it will be July-August anymore, it will obviously have to go further than that.

"If you ask me what I want in my club, I would like my club to be what I know it is going to be: sensible, balanced, not going to spend rivers of money, and we are trying to respect the situation, not just of football but of the world and society overall."

Living with staff under lockdown 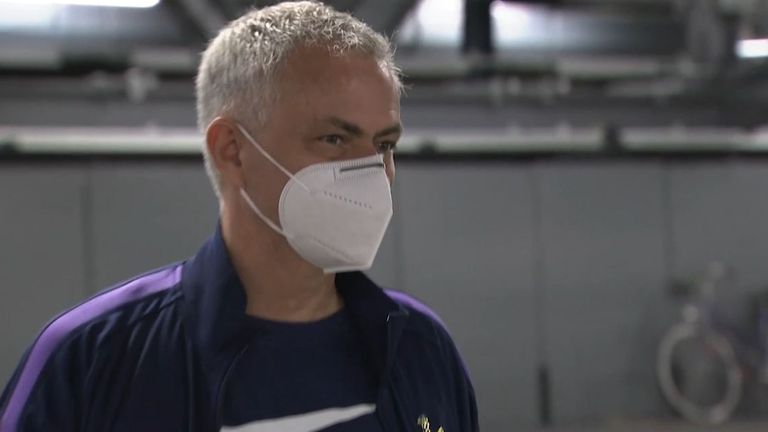 Last month, Mourinho showed Sky Sports News how he has been volunteering at the club's stadium during the coronavirus lockdown

During the current lockdown in the UK, Mourinho and his Tottenham staff have been living together near the training ground in Enfield, which the manager says helped them work more productively.

"It was a decision that we made, to stay all together. By staying together we could easily communicate, not breaking rules, you know that I had the episode with Tanguy, but with my assistants we were living in the same house," he said.

"We could work, we could analyse, we could prepare for the Zoom. Coming to the club mid-season, it was also important because now we have lots of time to analyse all of our matches. 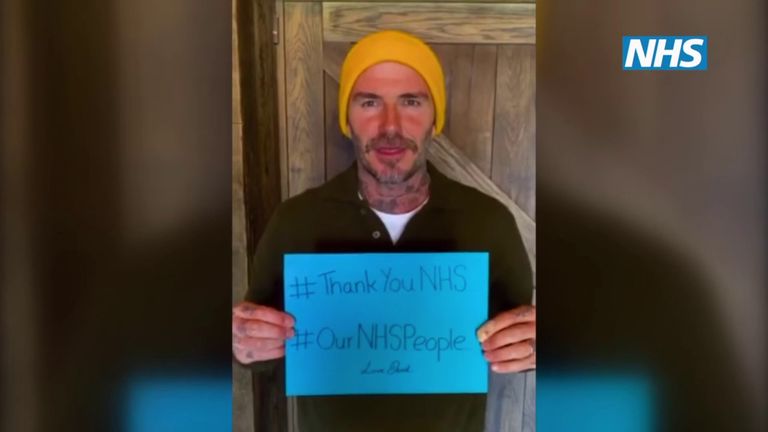 Anthony Joshua, David Beckham, Mourinho and Mo Farah were among those who posted messages of thanks to the NHS staff who are fighting to save the lives of those with coronavirus

"To be honest, there was a period where we were coming here [to the training ground], it's just a couple of minutes in the car, but when we were coming, we were putting on the music from the Rolling Stones, Living in a Ghost Town, because it is really what we were feeling."

Mourinho was also full of praise for his team as they stuck to training routines via video call during the lockdown and didn't even mind the odd interruption.

"It was much more about us as a group, about us as a family, to try and keep some discipline in our lives. The Zoom session, every day, 10am, everybody waking up at the same time, having a bit of work and finishing a bit of work, we stay together in the Zoom, having a laugh, conversation, discussing a few things," Mourinho said.

"As a club, we made a decision even to protect players and to protect society, we made the decision for no travelling, nobody was leaving to their countries, everybody stayed in London, and the majority of the players live around the area of the training ground or not far from Enfield, and it was very important to keep mentally healthy.

"We had dogs, we had cats, we had babies, we had family, we had lots of things going on [during the training calls] but it was funny and the guys were bringing the kids for the beginning or end of the session for a couple of weeks.

"We record it and we have it, and we share, and even the mums were getting the videos of the children working with the dads, while the dads were trying to keep fit.

"It was really fantastic because as you can imagine, different players, different houses, some in flats, some in gardens, some with gyms. As a club, to help them have the minimum conditions, we delivered foods, we had nutritionists speaking with them all the time, we had the sports science boys together with myself and my staff, and really, really it was group work that pleased me very much.

"I am so, so pleased, more than pleased, proud of the players as a group and as individuals. Everybody on time, nobody coming late, having a little bit of fun, enjoying it, finishing the session, staying together for a bit longer, it was good, and even for me, arriving in the club, still learning the players and the personality, I think it was good for me to try to know them better. I'm really proud of what they did."