Burnley vs Tottenham is live on Sky Sports Premier League from 7pm on Monday Night Football; kick-off at 8pm; Spurs will go fifth in table if they win at Turf Moor

Spurs have scored 31 goals in their last nine games in all competitions with Harry Kane and Heung-min Son leading their attack. Mourinho's La Liga-winning Real Madrid side scored 121 goals on their way to the title in 2011/12, accumulating 100 points and conceding 32 goals.

Despite Tottenham's impressive attack, Mourinho accepts his side are still trying to find the balance after seeing their defensive frailties highlighted when they let a 3-0 lead slip in the final 10 minutes against West Ham last week.

"In Real Madrid, I had amazing, amazing attacking players and we managed to build the team in a certain way," he said ahead of the trip to Burnley, live on Monday Night Football.

"I have to be honest and say we have lots of good attacking players here but we need to give stability to the team because the team needs stability in the back to feel solid, confident - to (be able to) have a go. So we need to find that balance.

"Let's say that it is a team thing, it's not just about individuals. We need to be able to play with all these attacking players and have the team with everybody ready to be organised defensively and not to give space to the opponent.

"And behind, we need to improve in some details - that's obvious.

On criticism labelled towards him for the pragmatic style of play Mourinho adopted at Manchester United and in his first season at Spurs, the Portuguese added: "Depends on the team. They cannot say that about my Real Madrid team that scored 121 goals in the league. 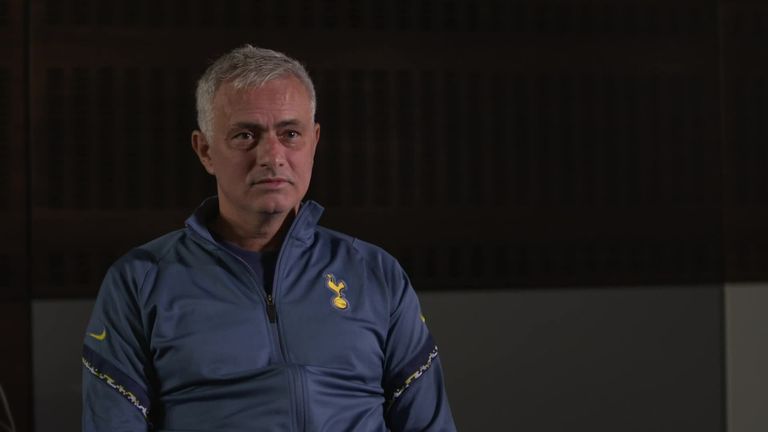 After almost a year at Tottenham, Jose Mourinho assesses his impact on the club as well as the return of Bale, the performances of Son and the current state of footballer development.

"If they say that about the way to finish second with Manchester United or last season to try to get a way to finish top six and to be in the Europa League, I think they are right."

Sean Dyche insists he does not envy the task facing big-name bosses like Mourinho as he prepares his Burnley side to take on Tottenham at Turf Moor on Monday night.

The 49-year-old believes the days when the likes of Sir Alex Ferguson and Arsene Wenger could hold court for over a decade is long gone given the increasing pressures faced by managers in the modern game.

Dyche said: "The demands of the clubs he (Mourinho) has been at have been incredibly high - and that's a different ball game.

"The juggling acts are at different levels. You look at Jose and he's been at top clubs. It seems there's a much more limited life span unless you are literally winning all the time over a long period.