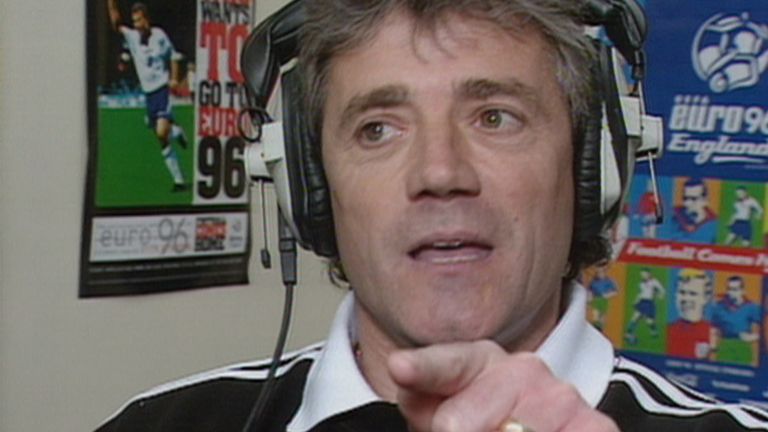 Kevin Keegan was the type of emotional character who was always going to react to Alex Ferguson's barbs during the climax to the 1995-96 Premier League season, says Gary Neville.

It was 24 years ago today that the-then Newcastle manager gave one of the most famous post-match interviews of the Premier League era.

However, while Keegan has often been viewed as having lost the plot in the run-in to that dramatic campaign, Neville - who went on to work under him as England head coach - disagrees.

"He [Ferguson] knew that Kevin had a high level of emotion, but what I would say having worked with him at England for a couple of years was that was not a manger cracking up or bottling it in my opinion," Neville told 'The Football Show'.

"I saw Kevin resign with England in the dressing room after the Germany game at Wembley and Kevin was always like that, he ran on emotion. That was the way he was as an individual, he was all or nothing. 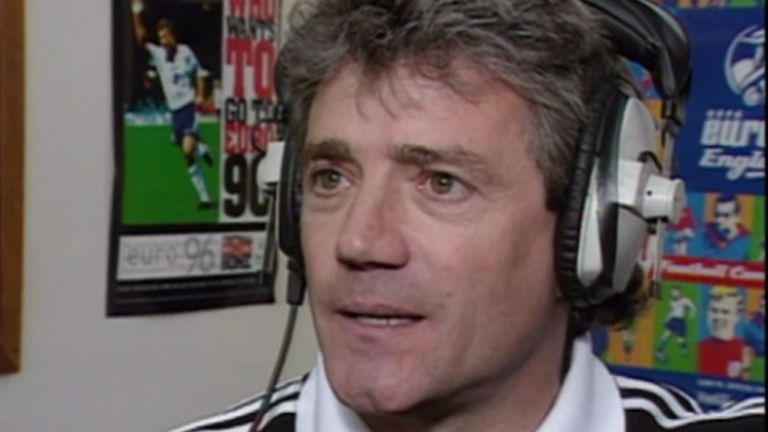 "He loved his players, he really protected them, he was a man of integrity and honestly and Sir Alex was obviously poking like you would do in the run-in.

"But at the time, just as with the Rafa Benitez 'Facts' speech, if you do not win after having an interview like that, you then go down the 'You've lost the mind games' in terms of the pressure. And that is what happened at the time.

"But it is compelling TV and when you think of the managers over the years that you love to listen to at the end of matches, they really give you something, then Kevin Keegan was one of those guys."

So what actually caused the Newcastle manager's rant in the first place? Well, we look back at the origins of the story...

Newcastle and Manchester United had fought a gripping and topsy-turvy battle for the Premier League all season long, with Keegan's young side racing into a seemingly insurmountable 12-point lead in January.

However, after Eric Cantona's goal had seen United win 1-0 at St James' Park in March, Newcastle's advantage at the top of the table was down to just one point and the two teams then stayed neck and neck in the title race until the climax of the campaign.

To add to the sense of drama, the two teams - who were by now level on points - still had to face both Leeds and Nottingham Forest in the final three games of the season.

It was after United's hard-fought 1-0 win over Leeds at Old Trafford - a game which saw the strugglers down to 10 men for 73 minutes and with defender Lucas Radebe in goal after 'keeper Mark Beeney had been sent off - that Alex Ferguson suggested the visitors only raised their game when facing his side.

I can't understand the Leeds players. I'm absolutely in support of their manager. He doesn't deserve his players. If they had played like that all season they'd be near the top. They raised their game because they were playing Manchester United. It was pathetic

"I can't understand the Leeds players," he said after the match. "I'm absolutely in support of their manager. He doesn't deserve his players. If they had played like that all season they'd be near the top.

"They raised their game because they were playing Manchester United. It was pathetic. I think we can accept any club coming here and trying their hardest, so long as they do it every week."

Over to the Toon

However, before Newcastle could play again, United thrashed mid-table Forest 5-0 at home to open up a six-point lead over their rivals, who now had to take on Leeds and Forest themselves in the space of just four days.

Keegan's side needed to win both games in order to pull level again with United, who now had a superior goal difference after their five-goal showing the previous day.

The first of those contests came at Elland Road on Monday Night Football, with all eyes on just how the visitors would respond in light of Fergie's comments.

Newcastle did manage to keep their cool to record a vital 1-0 win thanks to Keith Gillespie's early header, a result that maintained their title challenge, although they still had to win at Forest three days later to draw level with the leaders heading into the final match of the season.

And then it was over to Keegan to hear what the Newcastle boss had to say about his team's championship hopes.

There was little indication of what was about to unfold as presenter Richard Keys quizzed Keegan on the game and Newcastle's slender victory.

However, after Keys had asked the Newcastle manager why his players had struggled on the night, Keegan mentioned how "a lot of things have been said over the last few days", in reference to Fergie's earlier comments, before things really started to hot up.

"I think you've got to send Alex Ferguson a tape of this game, haven't you? Isn't that what he asked for?" Keegan raged.

But by now there was no stopping him as the Toon boss just could not hold himself back anymore.

"And we're playing Notts Forest on Thursday, and he objected to that," continued Keegan, whose team were also providing the opposition for Stuart Pearce's Forest testimonial later the same year.

"Now, that was fixed up four months ago, we were supposed to play Notts Forest, I mean that sort of stuff, we're bigger than that."

One final prod from Keys, who asked if this was all just part and parcel of the psychological battle of a title run-in, and the dam burst.

"No, no, when you do that with footballers like he said about Leeds - and when you do things like that about a man like Stuart Pearce...," Keegan, finger jabbing, roared down the camera.

"I've kept really quiet but I'll tell you something, he went down in my estimations when he said that. We have not resorted to that.

"You can tell him now, we're still fighting for this title and he's got to go to Middlesbrough and get something - and I'll tell you, honestly, I will love it if we beat them. Love it.

"It really has got to me. I've voiced it live, not in front of the press or anywhere. I'm not even going to the press conference but the battle is still on and Man United have not won this yet."

Newcastle were held to a damaging 1-1 draw at the City Ground thanks to Ian Woan's long-range strike with only 15 minutes to go.

As a result, United now only needed a draw at the Riverside on the final Sunday of the season in order to guarantee them a third Premier League crown in just four years.

Fergie's men did indeed go to Middlesbrough and get something, which was a comfortable 3-0 win to wrap up the title, while for the second time in three days, Newcastle could only manage a draw, this time 1-1 at home to Tottenham.