Newcastle takeover: The latest, the future and Mike Ashley's legacy

In a special podcast, we bring you the latest on the proposed takeover of Newcastle, what kind of transfer spending can be expected, and reflect on the Mike Ashley era.

Newcastle United fans can "dream again" with the proposed takeover of the club nearing completion, according to Steve Howey.

The former Newcastle defender was speaking on a special Sky Sports Football podcast, where he and Sky Sports News reporter Keith Downie discussed the latest developments in the deal which would see a Saudi-backed consortium take charge of the club from owner Mike Ashley.

Read on for excerpts of what they had to say - from the progress of the takeover to potential transfer spending and Ashley's legacy - or listen to their analysis in full on a special Sky Sports Football podcast with the links below or player at the top of the story. 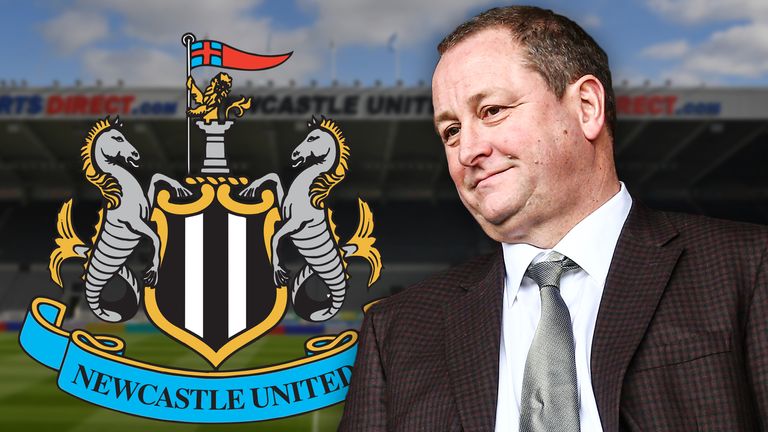 What's the latest with the takeover?

Keith Downie: In terms of the takeover going through, we're pretty much at the final knockings. A lot of spade work has been done, certainly in the last two months, but even more so in the last couple of years. We know Amanda Staveley tried to buy the club at the end of 2017 and failed to do so, when it ended quite acrimoniously with Mike Ashley at the time, when he described her as a waste of time. Now the two of them have got back together and I'm told by sources on Staveley's side of things that they've kissed and made up, so to speak, that that is water under the bridge now and here we are.

They have an agreement in place for a £300m takeover of the club by PCP Partners which is the consortium put together by Staveley. She would own 10 per cent of the club if and when it gets ratified. Reuben Brothers, a very wealthy English family - the second wealthiest family in the country - would own 10 per cent too but it would be majority owned by the Saudi PIF fund. They would own 80 per cent of the football club and they would essentially be in charge, although Staveley would be the face of the club on the board.

That agreement is in place, a deposit has been paid around £17m-£17.5m. It's now with the Premier League. There are two things to do: it needs to get the thumbs up from the Premier League, which is proving a little bit more difficult than some thought, and then, if and when that happens, it's a case of the remainder of the funds being transferred to Mike Ashley.

It's been with the Premier League for a number of weeks now [for an owners' and directors' test] but that can happen, it can take weeks, it can take months. With the current pandemic we've got I think that makes it even more difficult to work out when we'll have a resolution to this.

What does this potential takeover mean for the fans?

Steve Howey: I think one of the key words is excitement. Also hopefully being in a position where the fans can dream a little. I think when Mike Ashley took over that was a possibility, but the fans very quickly realised that wasn't going to be a possibility.

Fans will have seen how desperate the situation was at Manchester City and look at where they are now, look at the money Roman Abramovich has brought into Chelsea as well. Manchester City were in a lot worse a position but to have people coming into the club which have the financial backing they say they have, Newcastle fans are thinking, 'can we dream once more, can we recapture the era under Kevin Keegan when Sir John Hall and Freddy Shepherd were in charge?'

They've had 13 years of broken promises. You look at the amount of times Newcastle have struggled and you think, 'we're looking forward to the transfer market and thinking we need A, B and C to help the squad' - and sometimes there was nobody who came in.

I think the Newcastle fans, if this hopefully goes through, then they have got something to look forward to.

What kind of immediate investment might the new owners make in the squad?

Keith Downie: The biggest question mark for me over this whole thing is to what level will they invest.

It's easy for a lot of supporters to get carried away with things and we see reports of huge name players - the likes of Gareth Bale and Edinson Cavani - but certainly the noises I'm hearing from the buying side is they won't be investing to that level, certainly to start with anyway.

We see reports of huge name players but the noises I'm hearing from the buying side is they won't be investing to that level, certainly to start with anyway.

It sounds like it will be more of a slow building process. It's easy for supporters to think we're going to be the next Manchester City or PSG but, as I'm told, that will not be the case. They will try to improve the infrastructure of the club first.

Some fans may be disappointed by that. Some fans might think that is a clever way to do things. But I just think some of the names being bandied around at the moment, it's an open goal for agents.

How big is the gap Newcastle have to make up if they want to be challenging for top four and silverware?

Steve Howey: It's a huge gap. If you weren't following the season, you'd look where Newcastle finish and think, 'oh they haven't done too bad'. But all through the season it's been a struggle.

The lads themselves are a very honest group of lads that try their best. Under Rafa Benitez and under Steve Bruce they've been well organised and difficult to beat. Have there been times when it's been a really poor performance? Yes, but every team has them.

For me, the main priority is a goal scorer. We all know they're so difficult to get.

For me, the main priority is a goal scorer. We all know they're so difficult to get. And, of course, agents and clubs will all realise, 'there's Newcastle, they've just got new investment, let's hike the price up,' because that's what tends to happen. But for me, it needs to be a striker.

That's why they've struggled this season. You take away the two main goal scorers in Salomon Rondon and Ayoze Perez and they basically have no one that's going to score the goals. It hasn't happened for Joelinton or Miguel Almiron. Then you can slowly but surely build around.

How will the Mike Ashley era be remembered?

Steve Howey: I think fans will look on it as a period where the club's potential has been completely and utterly ignored. There have been times when they've finished the season quite well and you think, 'now is the time to push on' and they haven't done that because of the investment.

There was a lack of transparency and I think it's also not only how the fans have been treated but people who were excellent servants of the club as well - Kevin Keegan, Alan Shearer, Chris Hughton, Jonas Gutierrez.

Because of Mike Ashley there's now a void, a big gap between the fans and the club, and the fans and the players. The fans are so frustrated with decisions he's made. I think they'll look at it as 13 years of misery, to be quite honest. It wasn't good at all. And that's why fans are really pinning their hopes on this takeover going through.