Pep Guardiola says he would not stay at Manchester City for as long as Arsene Wenger has at Arsenal.

Pep Guardiola is grateful the Manchester City hierarchy gave him time to settle during a below-par first season at the helm.

Guardiola failed to win a trophy last term after taking over from Manuel Pellegrini in the summer of 2016, having claimed silverware in both of his maiden seasons with Barcelona and Bayern Munich.

While that led some to question his ability to adapt to the Premier League, his new-look side have surged into a five-point lead at the top of the table, with qualification for the last 16 of the Champions League already wrapped up with two games to spare.

Speaking exclusively to Sky Sports ahead of Sunday's showdown with Arsenal on Super Sunday, Guardiola said he is pleased he was given time to mould his squad and revealed how much he is enjoying his time with the club.

"Last season, we were not able to win one game away in the Champions League and this season we have won two, and hopefully against Shakhtar Donetsk we can do so again," he said.

"The people expect that when a new manager comes it, that it can instantly work and sometimes people forget that you need time to settle something.

"Get the players to know each other, to trust each other, to know everything about the Premier League - the opponents, the style of play, the referees - and it doesn't matter how much success you had in the past or not, you need time sometimes.

"Fortunately, I am a lucky guy and I have a club where they give me time to do that, so I don't have the feeling that they don't trust me and that is fascinating. That's why I'm so happy to be here.

"I think the players know that we can do what we do and it is tough for the opponent. That is the feeling we have right now but sometimes the opponent is better, like Napoli.

"We did quite well but they are outstanding so I accept that reality. You need to be mentally strong to recover and to take our moment and come back. The feeling is that we do what we have done, and that is tough for the opponents. We want to continue showing everything we can in every game."

Up next for City is the visit of Arsenal - live on Sky Sports Premier League from 1pm - and Guardiola says the regular meetings with other title-chasing teams is what makes the Premier League one of the toughest competitions.

"When people ask me what is different about the Premier League, it is because we have a lot of those [big] games. There are usually five or six contenders to win the Premier League so you have many," he added.

"Maybe you get three or four games against big teams in the Champions League and then you have to go away to West Brom which is always complicated so that's why it is a tough league. The level of the teams is so high.

"Arsenal can play if you let them play and they play as a counter-attacking team. When they have the players like they do, you have respect and then you play the game and you're asked 'who's the best?' We will try but of course, it is a tough, tough team."

Guardiola transformed his team over the summer, bringing in younger talent such as Ederson, Bernardo Silva and Benjamin Mendy, which he sees as a positive step.

"It's a normal situation because the important generation of players over the last few years got older so it's simple like that. You have to change like you change the manager or change the players, it is what it is. 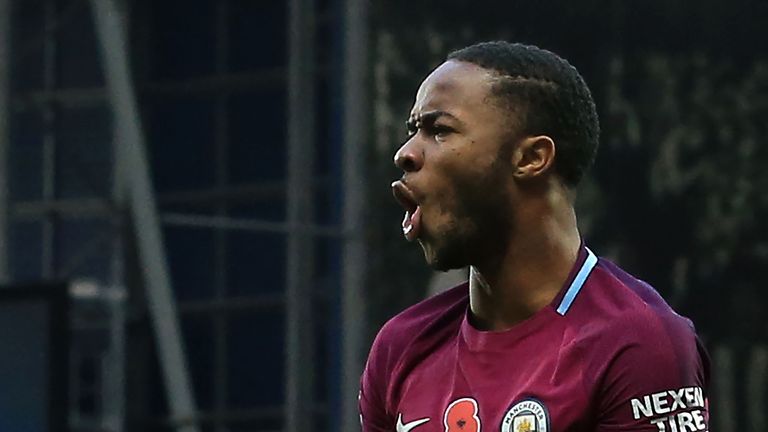 "Of course it [the squad] is younger, with our strikers and midfielders, then there is Phil [Foden] and the new ones coming through so that's good to have. You have the young ones in our side who are protected with older players like Yaya Toure and Nicholas Otamendi, and we need players who have that experience.

"We play in the Champions League sometimes with the likes of Gabriel Jesus and Leory Sane, and I think the age is 21 years on average so in playing on the bigger stages, that is good for the future of the club."

One young player who is on the cusp of the first team is Foden, who was named player of the tournament as England won the U17 World Cup, and Guardiola is tipping him to make it on the big stage.

"We trust him a lot, but it depends on the passion that he has. We cannot forget that he is 17 or 18 years old competing with the likes of Kevin de Bruyne, Fernandinho, Yaya Toure and Bernardo Silva and that step to the first team is not easy," he added.

"But I know that he has passion and he will be there. It depends on him, if he wants to stay or move, but we are going to do absolutely everything because we said how good he is before he was nominated as the best player in the World Cup so there is no doubt in how much he believes in himself.

"His next step is to train all year with us and get the rhythm of the training session and how to compete against all these players one-on-one. If he understands that, then he will have a space to play in the season and the next and so on in the team. It depends on him."