Sterling has continued to improve for Manchester City in 2018

Manchester City's Raheem Sterling ranks third in our countdown of the standout Premier League players of 2018.

Sterling scored 18 times last season as he won the Premier League with City for the first time and has continued that form into the current campaign.

Having turned 24 in December, the England international is now being rightly recognised as one of the most impressive young players in Europe.

Sterling's 13 assists in 2018 are more than all but one Premier League player - team-mate Leroy Sane - having moved clear of him when setting up two goals against Everton.

But it is Sterling's overall contribution that marks him out as one of the competition's outstanding players. He also ranks among the top 10 players in the Premier League in the calendar year for goals, chances created and dribbles completed.

Only Mohamed Salah has had more touches in the opposition box than Sterling in 2018 and that ability to get into dangerous positions is reflected in his improved goal return.

Sterling is Manchester City's top scorer in the 2018/19 Premier League season and the fourth highest scorer in the entire competition behind Mohamed Salah, Harry Kane and Pierre-Emerick Aubameyang.

What were his highlights?

The year began well for Sterling when he scored in the first minute of his first appearance of 2018, opening the scoring in Manchester City's 3-1 win over Watford at the Etihad Stadium.

It was his goal that capped another 3-1 win over Tottenham at Wembley in April and the following month he was celebrating his role in a title win that saw City pick up 100 points.

He went on to start all of England's key games during their run to the World Cup semi-final in Russia but endured familiar criticism from sections of supporters for his own form. 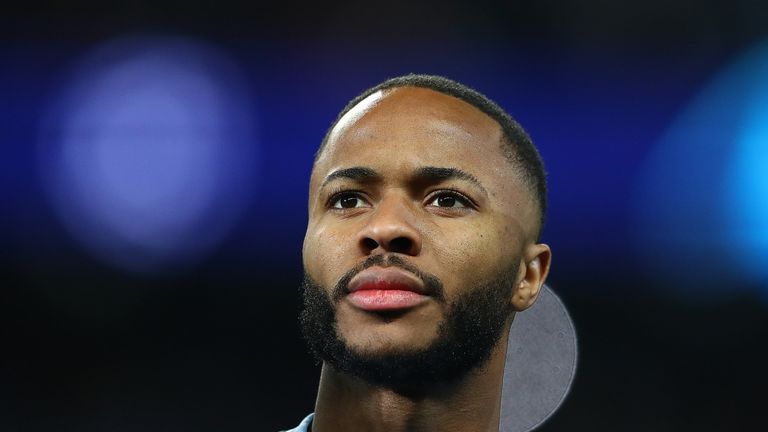 Gareth Southgate retained faith in the forward and Sterling enjoyed his best individual moment in an English shirt with two goals in the 3-2 win away to Spain in October.

Even the low point of defeat against Chelsea in December, a game in which he suffered alleged racist abuse, saw Sterling turn the unsavoury incident into a positive.

He was praised for raising the wider issue of racism in football and the media with his articulate and measured response emphasising the fact that he has matured into one of the game's leading figures - as well as one of its finest players.

"He's improved immensely, and Pep Guardiola has had a lot to do with that," Soccer Saturday pundit Paul Merson tells Sky Sports.

I think he's actually been the best consistently over 2018, I can't remember too many dips he's had over the calendar year.

"Sterling has been outstanding; I don't like to say he's been the most-improved player because that makes it seem like he wasn't good to begin with. Sterling was.

"I think he's actually been the best consistently over 2018, I can't remember too many dips he's had over the calendar year, and he plays every week for the champions. That tells you everything, in a team with so many options. It tells you what Pep Guardiola thinks of him."