Arteta linked with Arsenal and Everton vacancies, but Guardiola says no contact for Spaniard 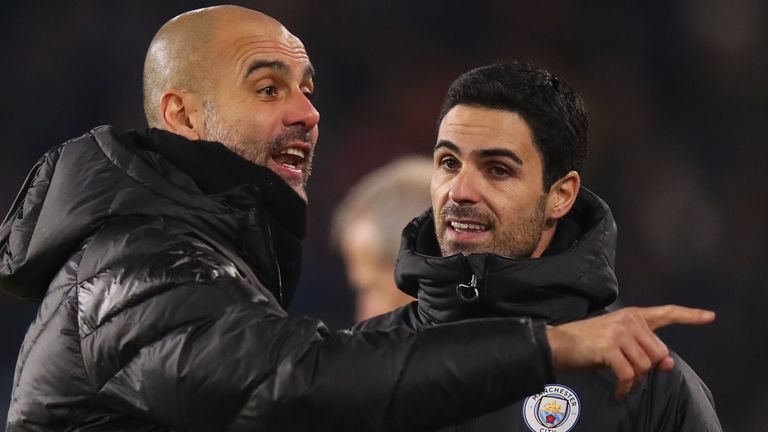 Pep Guardiola says no approaches have been made by other clubs for Mikel Arteta, and believes his assistant could succeed him as manager if he remains at Manchester City.

Arteta is one of the bookmakers' favourites to replace Unai Emery as Arsenal head coach, and has also been linked with the vacant Everton job.

But ahead of Saturday's derby game against rivals Manchester United - live on Sky Sports from 5pm - Guardiola made it clear no offers have been made for Arteta, and that he has not spoken to him about leaving the club.

He added: "He travelled to Burnley (on Tuesday) and tomorrow he will be close to me again against United. He will be here until the end of the season, I think so."

In an exclusive interview with Sky Sports, Guardiola elaborated on his "magnificent" relationship with Arteta, which has developed since the pair arrived at City in the summer of 2016.

"I'm not a guy that puts a gun to the heads of my staff or players and says what they have to do," explained Guardiola. "We are human beings and everyone has dreams and desires.

"Hopefully he can stay this season and the next one - as long as possible in this club. That would be my dream, but Mikel has his own life and I will never say what he has to do.

"I arrived here and we were in touch about working together and the time we have spent together has been magnificent.

"I tried to help him and he has helped me a lot. He knows what I want and what the club wants."

Guardiola also suggested that Arteta should resist any offers that may arrive from other clubs as he would be in line to step up and replace him as City boss, whenever he decides to call time on his spell in Manchester.

Asked if Arteta could replace him when he leaves, Guardiola replied: "Yes definitely. He is able to do that.

"But it depends on him, the club - many things that I cannot decide.