Sergio Aguero still in Barcelona and will not feature against Real Madrid on Friday, Guardiola confirms 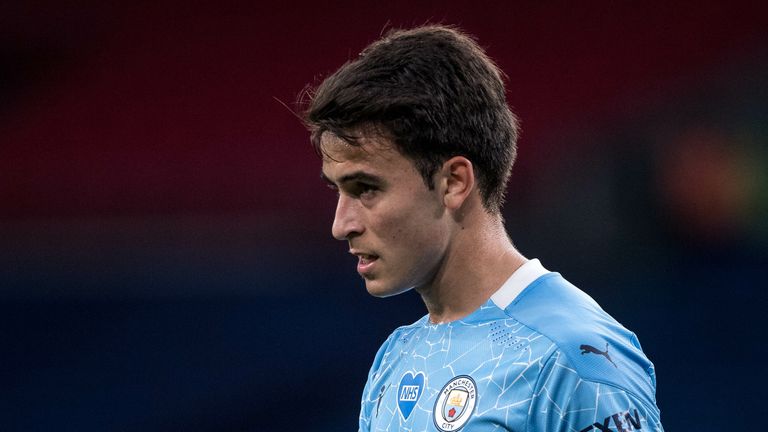 Pep Guardiola has revealed that Eric Garcia has told Manchester City he does not want to sign a new contract and believes the young defender wants to leave the club.

Spain Under-21 international centre-back Garcia - who is now in the final 12 months of his City deal - has played in eight of the club's 12 games since the restart and was offered an extension.

But ahead of City's Champions League last-16 second leg against Real Madrid on Friday, Guardiola said: "He announced to us that he doesn't want to extend his contract with Manchester City.

Garcia's decision to turn down a new City contract comes just days after they signed fellow centre-back Nathan Ake from Bournemouth for £41m.

The Premier League runners-up are embarking on a rebuild after surrendering their title to Liverpool and have already signed Valencia winger Ferran Torres in addition to Ake.

Improving the defence is considered a priority at City this summer and they are keen to add a new left-back and another centre-back, most likely Napoli's Kalidou Koulibaly.

Ahead of Friday's match at the Etihad, Guardiola confirmed that Sergio Aguero would not be fit to help City in their bid to hold on to their first leg advantage over Real.

The Argentine striker has not played since suffering a knee injury in June and underwent surgery in Barcelona.

Guardiola is unsure whether Aguero will be fit to feature in the latter stages of the Champions League - should City get past Real - saying: "He is getting better.

"I spoke with the doctors and everything is like we thought but he is still in Barcelona so I don't know. Hopefully he can come back and start training with us but I don't know."