Manchester City scored 102 Premier League goals last season but they wasted no time in strengthening their already formidable attack. In fact, Ferran Torres arrived from Valencia before they had even finished their Champions League campaign. City were in a hurry and so is he.

The 20-year-old has taken Leroy Sane's place in Pep Guardiola's squad but he is not here to make up the numbers. Torres broke into the Valencia team at the age of 17 and, according to an outspoken interview in Marca, asked to be made captain before his departure. He faces stiff competition for places at Manchester City but he is a confident character and it shows.

"I am very happy to be here and for the season to have started, and above all I just can't wait for Monday, to be able to play my first game in the Premier League," he tells Sky Sports with a grin.

"I am an ambitious player and I know I am capable of becoming a starter. I am going to work hard to achieve it."

Torres' self-belief is justified. He arrives at the Etihad Stadium as arguably the best Spanish player of his generation, a fast and powerful winger who can pick a pass as well as beat his man. The initial £20.9m fee Manchester City paid for him could rise to £37m but they hope it will prove a bargain.

His recent international exploits certainly bode well. In his first two senior appearances for Spain earlier this month, Torres set up one goal and scored another. "To be able to do that at only 20 years old was an honour for me and my family," he says. Luis Enrique, Spain's manager, described him as a "constant danger" during their 1-1 draw with Germany.

Torres now hopes to adapt just as seamlessly to the Premier League having spent his younger years following it on television. "It was more exciting than Spanish football," he explains. "There were a lot more goals."

He is excited to experience it for himself and feels his physique - he stands at over 6ft tall - and direct playing style will make him a good fit for it.

"Of course, I know English football is very different to football in Spain because it's more physical, but that's a style of play that is more suited to me," he says. "I believe I am going to adapt quickly."

Torres has taken the No 21 shirt vacated by David Silva, a Manchester City legend and his former idol back at Valencia - "his time there coincided with my arrival in the academy and he was one of the players I looked up to the most," he says - but for all his inherent confidence, he admits the step up in quality has taken some getting used to. 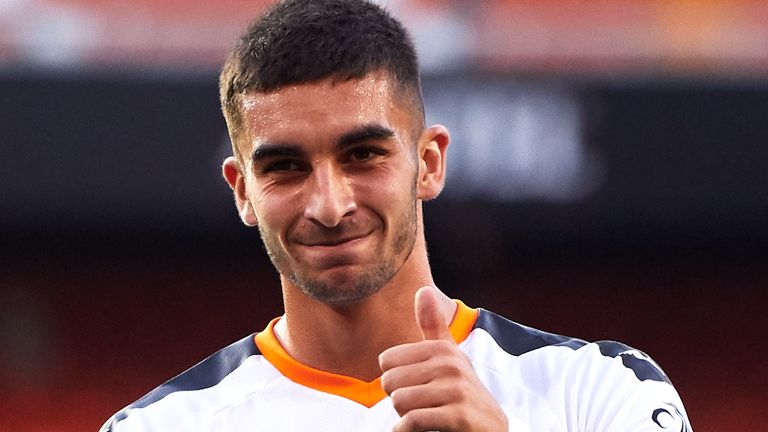 "Before I came here, I knew that there were a lot of players of a very high level," he says. "But in the first training session, I saw that, wow, there is a lot of quality. I hope to be at that level soon." He picks out Kevin De Bruyne for special praise: "He is a magnificent player, world-class."

There is plenty of emphasis on the wide players in Guardiola's system - Sane, Raheem Sterling, Riyad Mahrez and Bernardo Silva have all shone in recent seasons - and Torres hopes the 49-year-old will help him blossom too.

"He is a manager who knows how to get the best out of every player," he says of Guardiola. "I am young and I think I have a lot of room to improve, so I thought he was the right man to help me do that. He wants me to play my game and get numbers, in terms of goals and assists."

Torres speaks assuredly, with the air of a young man who knows what he wants and where he is heading. He puts his maturity down to his early breakthrough at Valencia, where crisis is never far away and the circumstances are invariably difficult.

"Of course, making your debut so young, at just 17 years old, makes you see life in a different way and approach things in a different way," he says. "So yes, I believe I am a bit more mature than a lot of players of my age."

Torres shone for Valencia, making 97 appearances in all competitions following his debut in 2017 and growing more important from season to season. Last year, only three Valencia players played more minutes than him in La Liga. In October, with his goal against Lille, he became the club's youngest-ever scorer in the Champions League.

It was a wrench to leave his boyhood club behind. "Of course, it is not easy to leave a place which has been your home for 12 or 13 years," he says. "You have spent your whole life tied to it, but every player has to look at what is best for him and I thought the best thing for me was to come to this great club and keep improving with Pep and these team-mates."

Torres is certainly serious about the challenge ahead. He grew up a short drive from Valencia's training ground and has never lived anywhere else until now, but he has moved to England alone - "I feel I've adapted well - it helps that it has been sunny," he smiles - and while this interview is being conducted in Spanish, he is determined to improve his English.

I know English football is very different to football in Spain because it's more physical, but that's a style of play that is more suited to me. I believe I am going to adapt quickly

"My English is almost perfect," he jokes, before reverting to his native language. "There is a lot of Spanish spoken in the dressing room but I have an English teacher and I want to learn the language as quickly as possible. I hope that in a few months we will be able to do interviews in English."

Before that, though, there are more important things to worry about, starting with a possible debut against Wolves on Monday Night Football.

"My objective is just to do as well as I can, to play as many games, score as many goals and provide as many assists as possible, and of course help the team win trophies," says Torres. "I believe am ready for everything."