City's record goalscorer has made just six appearances in all competitions this season after missing the start of the campaign following knee surgery; forward featured as a substitute in Tuesday's 1-1 draw with West Brom but missed a training ahead of Saturday's trip to Southampton

Manchester City forward Sergio Aguero says he is still struggling to shake off the knee injury that has sidelined him for a majority of the season and needs more time to return to full fitness.

Aguero, City's record goalscorer, has made just six appearances in all competitions this season after missing the start of the campaign following knee surgery.

The 32-year-old Argentine featured as a substitute in Tuesday's 1-1 draw with West Bromwich Albion but missed a training session ahead of Saturday's trip to Southampton.

"It's difficult," Aguero said. "Sometimes my knee is good, sometimes a little bit bad. I'm doing everything to help the physio and medical staff to improve.

"I need a little bit of time but I came back in the week, and I hope to be at my best. Now I need time, but it's a long season." 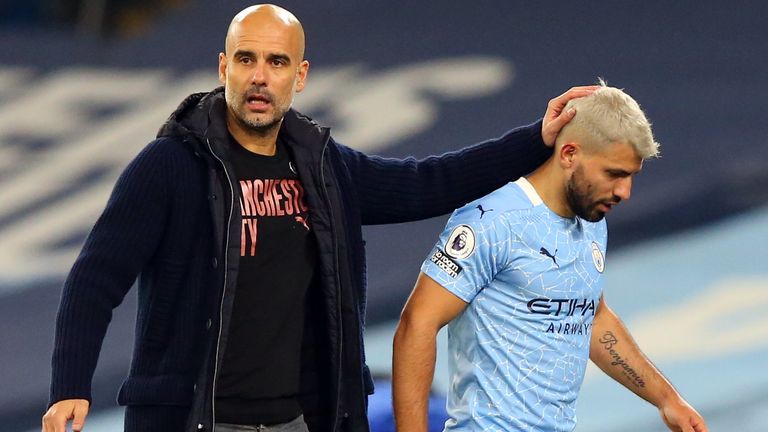 City are ninth in the Premier League, eight points behind leaders Liverpool and have scored 18 goals from their first 12 Premier League games.

It is in marked contrast to their previous three campaigns where they recorded 40, 36 and 35 at the same stage of the season with manager Pep Guardiola admitting finding goals was a 'new challenge' for him.

However, Aguero is confident his side will be able to mount a title challenge: "We always believe that we can challenge for the title. In the Premier League, you win two games and then you're near the top.

"We need to be calm, play the same way, because City always fights for the titles. Always."

Although City's scoring problems have been hampered by Aguero's injury problems while Gabriel Jesus has gone six games without a goal, Guardiola is adamant both will play a big part in turning City's fortunes around.

"The last 32-33 games we have played Sergio (Aguero) could only play four or five or them," Guardiola added.

"Gabriel (Jesus) has incredible numbers of minutes and goals in the Premier League and is one of the top three or four in history.

"But it doesn't just depend on his shoulders - of course the strikers have more responsibilities to try to win games but as I said, everyone can score goals.