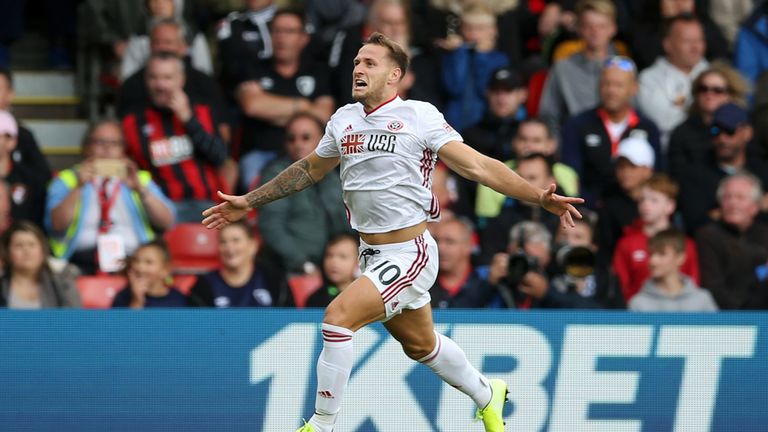 Chris Wilder says Billy Sharp will be allowed to make his own decision on whether or not he leaves Sheffield United in January.

Middlesbrough and Nottingham Forest have enquired as to whether the Sheffield United captain would be available this month.

Sharp, the Blades' record goalscorer, has only started one league game this campaign and is keen to secure more playing time but has not yet asked to leave.

"As far as I am concerned he is one of five strikers. The boys at the top of the pitch are doing really well and he's, yet again, knocking on the door," Wilder told Sky Sports.

"We're only 21 games in, there is a part for him to play this season, if he comes knocking on my door and says 'this isn't for me, I need to go get some regular football', then I'll take that.

"Whatever Billy wants to do - he's possibly the only player at the football club (this applies to) - whatever he wants to do, I will adhere to his wishes.

"I think that is only right in terms of the contribution he has made to this football club."

Jack Rodwell signed a short-term deal with Sheffield United last weekend after training with the club following his departure from Blackburn in the summer.

Wilder says he is always drawn towards "left-field" signings but admitted they do not always go to plan.

"I'm not going to take a wrecking ball to the side because we have lost a couple of games but the players have to recognise that we are here to win and do well. That has always been the remit," he added.

"They've got the shirts at the moment and Jack (Rodwell) is pushing, as it is with a lot of players. He has the ability to play right centre-half for us and in midfield. I quite like the idea of a left-field signing now and again, not always successfully.

"We had Jack in over Christmas, I understood his situation at his previous clubs. He's a player with obvious, undoubted talent, he would not have played for Manchester City or started off at Everton otherwise. He had an unfortunate experience, that can happen to anybody.

"I've not got any 'free' signings, every one I have to have the belief. I think it's a good fit for Jack and good fit for Sheffield United."