Aaron Ramsdale: Sheffield United's desire to sign me persuaded me to rejoin

Ramsdale: "When Chris Wilder and his coaching staff wanted me, that was a big thing for me and that they wanted to pay that money for me was a huge boost. It shows that you're wanted" 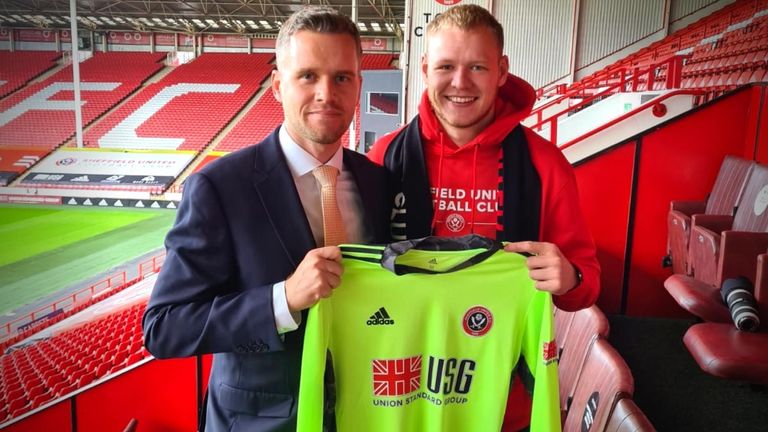 New Sheffield United signing Aaron Ramsdale explains why he's returned to the club on a four-year deal following an £18.5m move from Bournemouth

Aaron Ramsdale says the desire that Sheffield United showed to bring him back to the club helped persuade him to join them from Bournemouth for £18.5m.

The 22-year-old came through the youth system with the Blades but moved to Bournemouth in January 2017 after making just two FA Cup appearances for United.

Some impressive performances for Eddie Howe's side attracted the interest of Blades boss Chris Wilder and with Dean Henderson back at Manchester United after a season-long loan spell at Bramall Lane last season, they decided to bring Ramsdale back to the club on a four-year deal.

"I believe there was interest from elsewhere but to be honest I was out of the loop for most of the time," Ramsdale told Sky Sports News.

"I spoke to Eddie Howe when he left [Bournemouth] and that was probably the most contact I had with the management.

"I went on holiday, things developed and I actually found out on the plane home that the fee had been accepted, so I didn't have many conversations with management at Bournemouth or me pushing anything, it sort of just happened.

"When Chris Wilder and his coaching staff wanted me, that was a big thing for me and that they wanted to pay that money for me was a huge boost.

"It shows that you're wanted and there's no better feeling than feeling loved at a football club."

As for whether he needed to be talked into coming back to a club that had previously let him go, Ramsdale insisted he required no persuading to return to a team that he knew so well.

Ramsdale added: "I spoke to him [Wilder] after the fee was agreed and a couple of days later he just said, 'are we getting it done?'

"I knew him, all of his coaching staff and Darren Ward [United's goalkeeping coach].

"The fans were a massive factor and playing here with the fans behind us again, when we are allowed to, was a huge positive for me. They are crazy about football and so am I.

"It's a place I always come back to and see friends if I ever get time off over the weekend and family members are only about an hour and a half away, so I get to see them more regularly as well.

"Knowing the place, the training ground and the people so well, it definitely feels like home."

Sheffield United will face Wolves at home in their opening game of the 2020/21 Premier League season on Monday September 14 after the fixtures were announced on Friday.