David Moyes exclusive: How West Ham used lockdown to get back on track and maintain their momentum this season

David Moyes tells Sky Sports how a lockdown reset, added quality, and a confidence shift improved West Ham, and why a formation change this season is benefitting them at both ends of the pitch. Watch Sheff Utd v West Ham live on Sky Sports Premier League from 1pm on Sunday; kick-off 2pm.

Few teams have kicked on since the summer's lockdown like West Ham. They returned to action in June transformed, ensuring their Premier League status with a string of impressive performances and results. There have been tactical tweaks since then, but the momentum continues.

Handed the toughest first eight games - on paper - of any team in the Premier League, David Moyes' side have come through tests against Liverpool, Man City, Tottenham, Leicester, Arsenal and Wolves, along with Newcastle and Fulham, with their confidence up and points tally encouraging.

Contrast that with Sunday's opponents Sheffield United, who appeared to be knocked off course by the Premier League's pause last season, and who have struggled to improve in this campaign. West Ham have taken points from five of their eight games this season; the Blades have just one point to show for their efforts.

So what has been the key to West Ham's turnaround? What has been behind them picking up almost as many points in their past 17 games as they did in their first 29 of last season?

For West Ham boss Moyes, it was the result of using the lockdown break effectively to restore fitness, refresh the mental approach, and then capitalise on that replenished confidence this season.

"I think since lockdown we've improved greatly," he told Sky Sports in an exclusive interview. "The period of lockdown, I could nearly have called that a long pre-season. When we got players back obviously it all started in ones and twos but it gave me the chance to be closer to the players and it gave me a chance to try to build the team spirit, which I thought needed help with as well.

[Lockdown] gave me the chance to be closer to the players and it gave me a chance to try to build the team spirit, which I thought needed help with as well.

"So I have to say the players have done a great job. Because we were under so much pressure with the [threat of] relegation last year, when we came back the focus was completely on: how can we win the games, how can we get through the next game to get the points required?

"I think since then, we've grown. We've scored an awful lot of goals and I think we started well again this year. We had a poor defensive record last year, and we worked hard to try to find a way of eradicating it or certainly making it better, and at this present in time we're doing a bit better in that department as well."

Formation impact on defence and attack 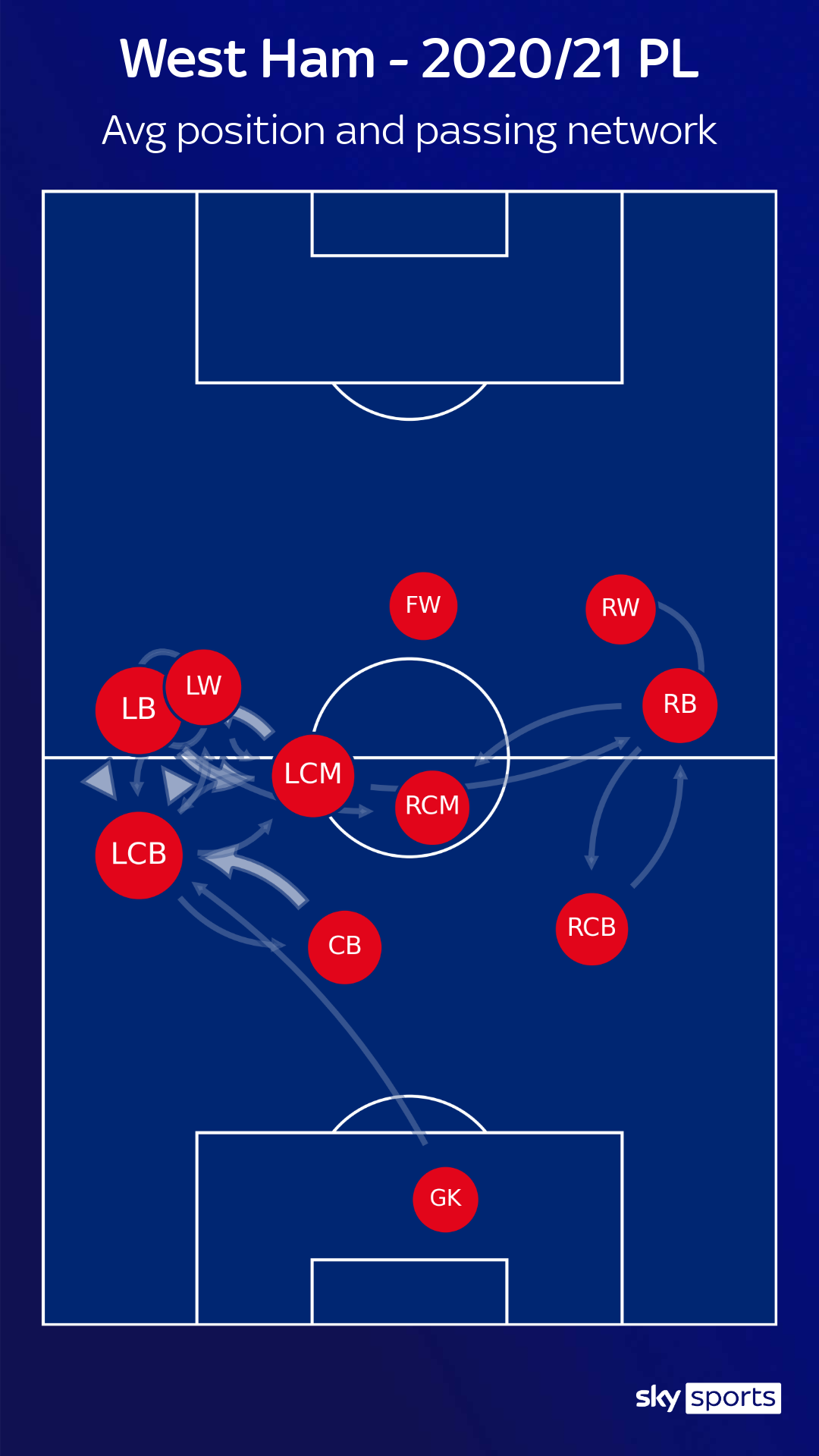 Building on that strong finish to last season has seen Moyes turn to a 3-4-3 formation. Combined with a settled team - only Aston Villa have made fewer line-up changes this season - the system has given West Ham balance at both ends of the pitch.

Defensively, there have been three clean sheets, a tally only bettered by four sides, while on the front foot the set-up has enhanced one of the team's strengths: crossing.

Only Everton (six) have scored more than West Ham's five goals from crosses this season, with Aaron Cresswell's deliveries from set-pieces accounting for nine chances created, the most by a player in those situations in the Premier League.

"I was worried about the amount of goals we'd conceded, I had to find a way of making sure we weren't losing two, three goals every game because if we are, it makes it too hard to win. But in the same breath, we had to think, how could we score more," Moyes said, as he explained the change in formation.

"From the scoring side of it, getting [Michail] Antonio as a centre forward - and his form has been so good, he's developed into a really top-end centre forward at the moment with his finishing, with his hold-up play, with his ability to physically run in behind with his speed as well. So he's got lots of capabilities which has greatly helped.

"But the introductions in January - I think if we'd not brought Jarrod Bowen and Tomas Soucek in we'd not have been in the Premier League. Those signings made such a difference to us, gave us another dimension and it was something we were able to build on and we grew in confidence from it.

The change to 3-4-3 fitted what we had, trying to concede less goals, trying to score more goals and getting players in the team - and I've got to say, since we've played it we've done very well.

"So I think the change to 3-4-3 fitted what we had, trying to concede less goals, trying to score more goals and getting players in the team - and I've got to say, since we've played it we've done very well.

"Arthur Masuaku has come into the team and done really, really well for us [at left wing-back], we brought in Vladimir Coufal in the summer who has added competition on the right-hand side for us as well, so we've suddenly got a bit of a better balance in some more choices.

"And people arriving in the box has probably been one of our biggest strengths. They've not all been headed goals; there have been different types of crosses. Obviously crossing plays a big part in football and if we can deliver good balls in - against Fulham we didn't do that - but in other games we delivered some really good balls in and got some good goals from it."

Moyes points out he has plans to revert to a back four when required but it's clear he feels he now has an encouraging base to work from. He's also adamant stability is crucial to success.

"More than anything else, consistency at any football club is important, whether it be your team selection or the consistency with the manager being there," he says. "I think it helps football clubs. And certainly a club like West Ham, us having a period of stability I think is really important."

The hope will be, though, that West Ham continue to build, and players such as new signing Said Benrahma add to the quality.

The £30m forward from Brentford - who had an eventful home debut against Fulham, providing an assist for the winner but then giving away a late penalty which was missed - is being eased into action by Moyes, who took a similar approach to Bowen when he stepped up from the Championship earlier this year.

But Moyes is convinced the Algerian will bring a cutting edge to West Ham's attack, especially now he has had a chance to see the standard in the Premier League and get his fitness back to a high level after a hard season in west London.

"What attracted me was his goals and his assists," said Moyes of a player who hit the net 17 times and set up nine goals last season.

"We've had a good look and he's getting there. He's in a better condition. At the time [when he was signed in October] he was probably looking to get away and needed some work done. But I've been really pleased with him.

"Obviously he got an assist against Fulham before giving the penalty away but the truth is we brought him in to play at the top end of the pitch, not the bottom end of the pitch."

Back in action at Bramall Lane

Like Bowen, Moyes believes Benrahma can be another hit from the second tier - "a lot of the boys who come up have got something to prove" - and he is likely to get another chance to show what he can do at Sheffield United this weekend.

At Bramall Lane, West Ham will aim to continue their good form when they face a Sheffield United team who have made the joint-worst start to a Premier League season.

Five of Sheffield United's seven defeats in this campaign have been by just one goal, though, and Moyes isn't taking anything for granted.

"They've had a similar start to the season as us, they had a lot of really hard games," said Moyes. "They'll see this as a home game and a chance to take points but we need to go there and show exactly what we are, which is an improving team."

If West Ham do win at Bramall Lane it will be their best start to a Premier League season since 2015/16 when they ultimately finished seventh. Signs of progress, indeed.