West Ham boss David Moyes to Sky Sports: "I wish I could promise that we'll go and beat one of the top teams away, but I would rather be consistent through the Premier League"; watch Man Utd vs West Ham on Sky Sports Premier League from 4pm on Sunday; kick-off 4.15pm

David Moyes and wins away at the traditional 'Big Six' clubs in the Premier League do not go hand in hand.

At West Ham, Moyes is yet to lead the Hammers to a victory away at Man City, Liverpool, Chelsea, Arsenal, Tottenham or Manchester United. The Hammers have taken just two points from their last 19 games in the league against the top sides, including a 1-0 defeat to Liverpool last week and a 2-1 defeat to Chelsea at Stamford Bridge earlier in the season.

But, they have another chance to end that dismal run when they travel to Old Trafford to face Erik ten Hag's side, live on Super Sunday on Sky Sports, and while Moyes believes his side are getting closer to that elusive win that he thinks can help take them to the next step, he insists the consistency his West Ham side have shown in sixth and seventh-place finishes over the last two seasons is more important.

'A win at a 'Big Six' club would feel good, but consistency key' 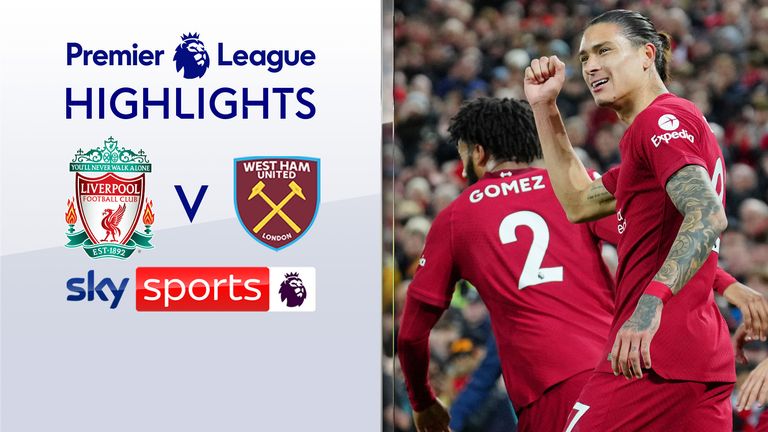 FREE TO WATCH: Highlights from Liverpool’s win against West Ham

"At Chelsea the other week we probably lost because a decision didn't go our way. We were winning that game up until around the 80th minute.

"There have been a lot of things that have not gone our way, but yes, we are trying to make the next step and I wish I could do it right away.

"I wish I could promise that we'll go and beat one of the top teams away from home, but I would rather be consistent through the Premier League than win one game at Old Trafford or Anfield.

"What would a win at a big six club do? It would feel really good, but it wouldn't be as good as having a consistent team, winning the games we should win, trying to be competitive and hanging in.

"It is always hard going to an Old Trafford, going to an Anfield or the Etihad Stadium. Those games have always been really difficult."

A trip to Old Trafford won't fill Moyes or West Ham supporters with too much excitement.

The Scottish boss, who spent 51 games in charge of Man Utd, has not won in 15 Premier League away visits to Old Trafford as a manager. He has lost nine of his last 11 top-flight visits to his former club as a manager - losing two of his three Premier League visits with West Ham.

He has only one win in 17 away visits to United, with his only win coming in the form of West Ham's 1-0 win in the third round of the League Cup in September 2021.

However, despite West Ham's poor record, the two sides have been much closer in terms of league positions in recent seasons and Moyes insists there is not much between the two sides at the moment as he targets a win that would put the Hammers within three points of Ten Hag's side this season.

"I like going back to Old Trafford, but it is never a game you look forward to because of the difficulty," he said.

"When I was a manager and I was going to play Sir Alex Ferguson's team it was, wow, with the quality of the players they always had.

"You always knew you were in for tough games, but as my time went on, even at Everton, we had some huge games there and gave them some huge challenges.

"I hope we get time to do that and challenge them again. 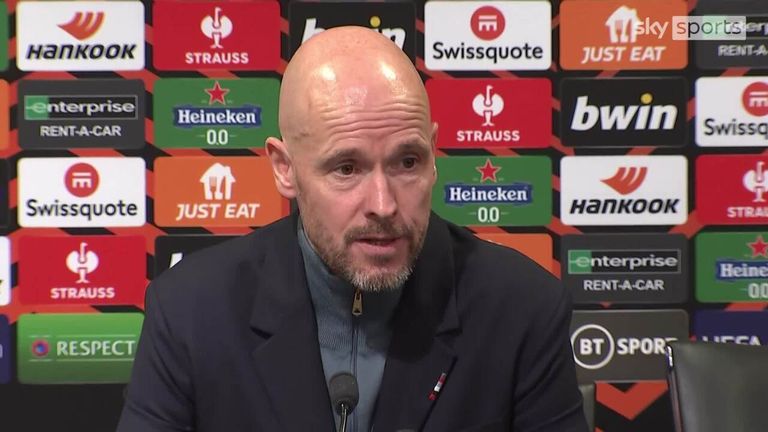 Manchester United boss Erik ten Hag says his team are aware they have to be at their best for a 'tough test' against West Ham.

He added: "It's easy talking about the three points but we realise, over the last season or two, we've been competitive against Man Utd. We've been trying to push them hard, and we've got close.

"Can we get close this season?

"I think United have got a good side. They have brought in good, steady players and they already have good players, so I think it will be a tough game on Sunday.

"Last year, they beat us by a point to sixth in the league. It all went down to the final game of the season. So, if you are talking about whether there is much between the two sides the last year or so, no there is not." 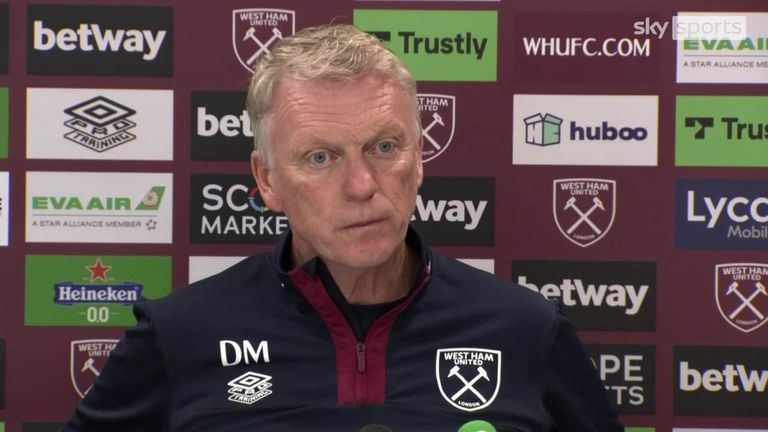 West Ham manager David Moyes manager has praised the job Erik ten Hag is going at his former club Manchester United but believes his own side are coming into form ahead of their trip to Old Trafford.

After a difficult start to the season, West Ham are now back in the top half of the Premier League, six points behind sixth-placed United.

The Hammers have now won three of their last five league games, after just one of their previous seven, and Moyes insists staying calm and using his experience played a key part in helping his side turn around their fortunes.

"Here at West Ham we've probably been on a great climb for two-and-a-half years," Moyes said. "When we came in, when you look back, we were on the verge of relegation.

"Could we stay up? We came in in the November and we thought we did a good job, keeping the team up.

"Then we went on to finish sixth the next season and then we finished seventh and got to the semi-final of a European competition. Sometimes it is very hard to stay on that high plateau and keep playing that way.

"My experience told me at Everton that after a good year we quite often had a bad year. Then we became a more regular team that often finished, certainly in the top eight most years.

"I see similarities with West Ham," he added.

"What needs to be allowed to happen is a little bit of a growth period where you accept having a bad patch, but if you are going to get worried when you lose two or three games that starts to spread and that is not a good thing because you start to think you are not quite as good

"However, we realise we are trying to build the team and integrate some new players."

Moyes: I'd love to win a cup for West Ham

"I would love to be able to win a trophy for West Ham and for our supporters, but personally, I see consistency over a season meaning more because I think it shows the work you put in over the year, the coaching, the players and getting them to perform."

"I see that as being a big, big thing. It would be good to be a cup team but nowadays, I don’t think anyone would like to see themselves as a cup side but get relegated from the Premier League.

"But winning a cup is also huge for us." 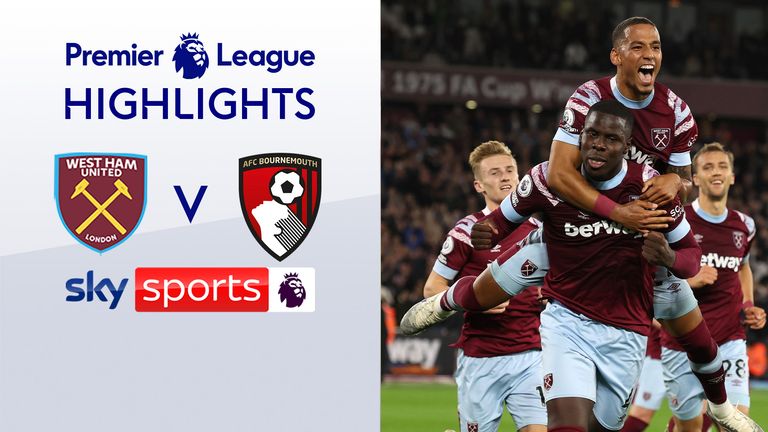 FREE TO WATCH: Highlights from West Ham's win against Bournemouth

Another key factor in the turnaround at West Ham has been their form at the London Stadium. They are on a run of six straight wins in all competitions and three of their four Premier League wins this season have come in east London.

Their only Premier League away win this season was 1-0 at Aston Villa back in August and Moyes, who praised the atmosphere at the London Stadium, wants to see an improvement in his side's away form, starting at Manchester United.

"When you are winning, that gives you a feeling you go and get results anywhere," he said. 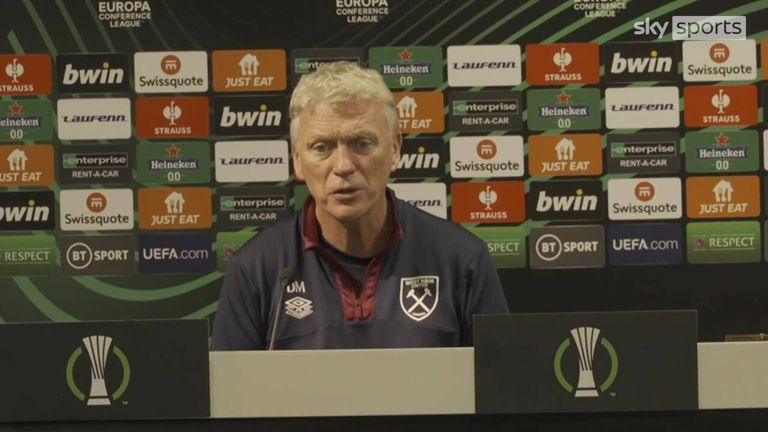 "We go to Anfield the other night and we missed a couple of real big chances late on to make it 1-1 so, I think all of our away games this season we have been competitive. But that is where we've missed the points. That is where we haven't got another four or five points on the board to really be challenging at the top end.

"We do need to work hard on improving that but at the same time, we do want to keep the London Stadium a difficult place to play at.

"The crowd are with us. Everybody has grown into the feeling of the new stadium. We had some brilliant nights last season in Europe, and we had some great results, beating Liverpool for example. We've had some stunning games in the stadium.

"I think the supporters see a really committed group of players and when you get that, the fans buy into it and back you. So, we hope we can keep that going."

'Nice to have ECL pregression sorted'

"It certainly nice to have European qualification sorted because the amount of games everybody has had, and obviously we had a qualifier, and then you have to actually go and win the games. We’ve done it.

"It’s an easy thing to say you want to do but to get it done is another thing.

"We’ve tried to rotate our group as much as we can because we realise the importance of the Premier League games. We probably we are little bit more prepared at the start of last year than we were this year but to be fair to the players we’ve still managed to get the results we’ve needed in Europe."

West Ham now have just five games to go before the mid-season break for the World Cup.

Qualification for the knockouts stages for the Europa Conference League has been secured and focus now turns to pushing up the Premier League table further and a League Cup tie against Blackburn before the World Cup.

Moyes is keen for his side to head into the break on a high ahead of what he describes as a race for the finish when the Premier League resumes on Boxing Day.

He said: "It will be important to head into the World Cup break on a high but if I'm being honest, I think everyone is probably already looking forward to a break.

"There's been this dot in the distance and a period where we know we'll come off it but getting there and putting yourself in a really good position heading into the break is really important.

"That's because when we come back in December, I think there might be a feeling that we've got a race to the finish line quite quickly."