Troy Deeney believes Arsenal lost to Watford due to a lack of "cojones", refuting claims an unfair penalty decision was the reason for their defeat.

Following the dramatic 2-1 loss at Vicarage Road on Saturday, Arsenal boss Arsene Wenger branded the penalty decision which gave Watford the opportunity to net the equaliser as "scandalous".

But Deeney, who converted the penalty before Tom Cleverley went on to score the winner in stoppage time, had a different analysis claiming Arsenal lack the bite to compete physically and was critical of Wenger and Arsenal's performance.

"I've heard Wenger's already blaming [the penalty] as the reason for why they lost," Deeney told BT Sport.

"Well, I'm not going to be one to tell Mr Wenger about himself, but there's a reason that they lost and it wasn't because of one penalty.

"I have to watch what I say, but it's [having] a bit of cojones, is what I'll say. Whenever I play against Arsenal, I'll go up and think 'let me whack the first one and see who wants it.'

"I came on today and jumped up with [Per] Mertesacker -- I didn't even have to jump, actually -- I nodded it down, the crowd gets up: 'Yeah we've got somebody who can win it', and they all just backed off.

"I just think personally there's an element of that being an equaliser for me. I know I'm not technically gifted like they are, not as quick, but if you want to fight with me, I'm gonna beat you all day.

"If you want to come into my world and do that, you can do that, but you've got to be at a level where your excellence of keeping the ball, being fast and getting in the right positions are all 10/10 because my equaliser is I'm big, strong, and I do all the ugly stuff you don't wanna do, and I'm going to make it horrible for you." 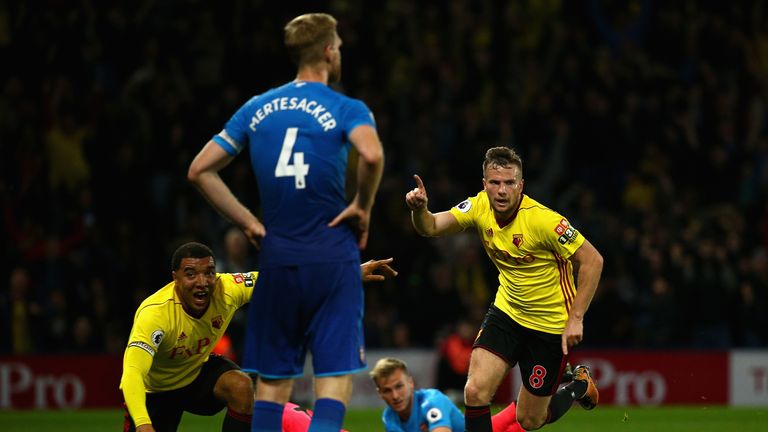 Former Arsenal defender Martin Keown responded to Denney's comments, questioning whether Wenger had ever replaced the physicality his side possessed during his spell at the club.

"I hope the Arsenal players are listening because my blood would be boiling if I was hearing that, because the one thing I have to guarantee is that I'm up for a battle and that I'm going to be confrontational," said Keown.

"You have to repel that attitude from opposition, because that's what happens and that is why Watford got back into the game today.

"It was a given in the team that I played in and if it's missing from the current group then Wenger has to seriously examine that. You have to wonder whether that's ever really been replaced."