Report and highlights from the Sky Bet Championship clash between Bristol City and Nottingham Forest at Ashton Gate as Lyle Taylor scored twice in stoppage-time to steal a stunning turnaround victory. 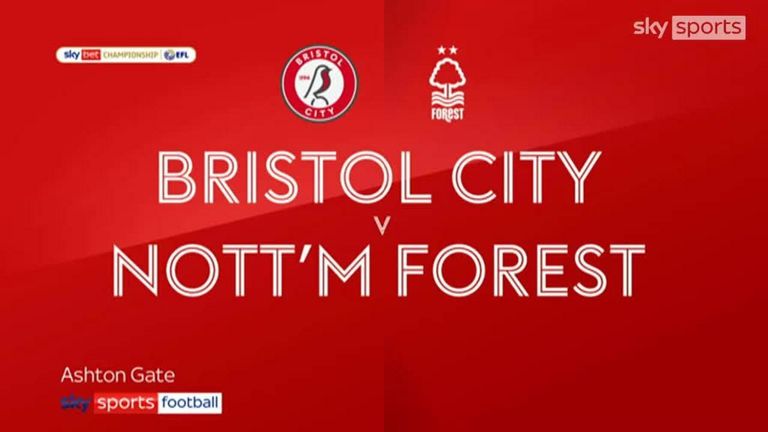 The hosts took a 39th-minute lead when Nahki Wells saw his low shot from just outside the box saved at full stretch by Brice Samba, only for the ball to break for Alex Scott to fire into an unguarded net.

City were still ahead on 90 minutes, but Nathan Baker fouled Djed Spence and Taylor equalised from the resulting penalty.

Seconds later Taylor had visiting fans behind the goal in raptures when netting the winner from close range after Dan Bentley had parried a shot from another substitute, Joe Lolley.

The result extended City's winless home run to 17 games, 14 of them since Nigel Pearson was appointed manager.

Forest started brightly and a mistake by Rob Atkinson allowed Brennan Johnson to get in a shot that was blocked.

Jay Dasilva was denied in similar fashion at the other end on 16 minutes and seconds later Andreas Weimann should have done better with a header that was comfortably saved by Samba.

Scott fired wide when it seemed easier to score on 20 minutes after the ball reached him eight yards out.

Johnson was causing problems for Forest and, after getting past Nathan Baker, he sent a low drive against the inside of the far post on 33 minutes.

Scott's goal meant Bristol City led at half-time, but after the restart Forest launched wave after wave of attacks.

Spence had a shot deflected wide, Lewis Grabban found the net only to be ruled offside and some desperate City defending brought several corners.

The home side thought they should have had a penalty on 56 minutes when Scott went down inside the box, but referee Simon Hooper waved play on.

Wells then tried his luck from near halfway and saw his superb effort just clear the crossbar with Samba well off his line.

Forest were wasting some promising attacks with a poor final ball, while Grabban netted from an offside position as frustration grew.

The impressive Wells almost doubled City's lead on 71 minutes, turning his marker and hitting a powerful drive that Samba somehow managed to tip onto a post.

Chances were coming at both ends. Weimann had a shot blocked following a slick City break, while Lolley shot wide for Forest.

Both managers made full use of their bench and Forest's last substitution, Taylor replacing Lewis Grabban on 81 minutes, proved decisive as they won for the fourth game in a row.

Bristol City's Nigel Pearson: "I would have been disappointed had we drawn the game. To lose it in the way we did was tough to take. We were naive over the two goals we conceded and our reaction to giving away the first was not good. It is my team and my responsibility. I thought we played well enough in the first half, but didn't protect the ball well enough in the second.

"My job now is to pick the players up because they are understandably very disappointed. I know where we are as a club and where we need to improve. Again there was no shortage of effort. But we have to be better at managing games when we are ahead here at Ashton Gate. The run goes on and people will keep on talking about it. I try not to get emotional, but of course that is very difficult on nights like this."

Nottingham Forest's Steve Cooper: "I have only known Lyle for three or four weeks, but I really like him and he has a big heart. It said a lot that after netting the penalty he rushed to grab the ball for the restart, even though there was so little time left. That is the winning mentality we are trying to instil. Lyle has worked really hard on his game since I joined the club and deserved his moments tonight.

"He does some great work for charity, so there is a lot to like about him. But it was a great team effort tonight and a great example of never giving up. It is still early days and there are things to work on. Our final ball could have been better and we won't overlook that. But the spirit about the squad was there for all to see and it was a great result for us."