Birmingham City wore "Arthur we love you" T-shirts ahead of their Saturday game, while Coventry City fans remembered the six-year-old with a sixth-minute applause; Chelsea and West Ham projected a large image of Arthur ahead of their match at the London Stadium 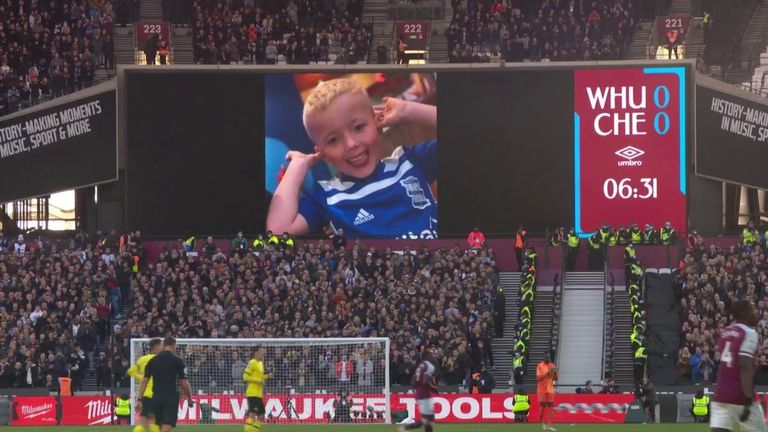 Footballers and fans across the country have paid tribute to murdered schoolboy Arthur Labinjo-Hughes after his killers were jailed.

Six-year-old Arthur died of an "unsurvivable" brain injury at the hands of Emma Tustin following a campaign of "evil" abuse by her and his father, Thomas Hughes in Solihull last year.

The couple were sentenced for murder and manslaughter respectively at Coventry Crown Court on Friday.

Birmingham City wore "Arthur we love you" T-shirts and were pictured carrying a banner bearing their young fan's picture before their match against Millwall on Saturday.

A minute of applause for Arthur. 👏 pic.twitter.com/QEQlgfSzXW

Hughes and Tustin's trial heard that Arthur's father ripped up two of the boy's Birmingham City shirts in front of him, with the defendant agreeing it made the youngster "visibly upset" and was "nasty and cruel".

Distressing audio footage also revealed Arthur pleading "no one loves me" and "no one's going to feed me" in the run-up to his death in June 2020.

A number of other clubs remembered Arthur before kick-off on Saturday.

Chelsea and West Ham projected a large image of him ahead of their match at the London Stadium.

Coventry City encouraged fans to take part in a sixth-minute applause at their game against West Brom, as did Wolves at their fixture against Liverpool, and Newcastle as they hosted Burnley.

Tustin was jailed for life with a minimum sentence of 29 years, while Hughes was sentenced to 21 years.

The case was described by judge Mr Justice Mark Wall QC as "without doubt one of the most distressing and disturbing cases I have had to deal with".

Jurors were told of how Arthur was made to stand for more than 24 hours at a time, was physically and verbally abused, and poisoned with salt-laced food.

Sentencing them, Mr Justice Wall said: "This cruel and inhuman treatment of Arthur was a deliberate decision by you to brush off his cries for help as naughtiness."