Aiden McGeady: Sunderland under Jack Ross is different and refreshing

Aiden McGeady wants to help Sunderland win some silverware when they face Portsmouth in the Checkatrade Trophy final at Wembley on Sunday. Adam Bate caught up with the winger to find out how Jack Ross has changed the mood at the Stadium of Light...

Even in a discussion that takes in Aiden McGeady's recent Sky Bet League One Player of the Month award and looks ahead to a Wembley cup final, the context of Sunderland's struggles is never too far away. Drenched with negativity. That's the term that McGeady uses to describe the place prior to this season. Now he is helping to change that.

"I was part of the team that was relegated last season and that's never something you want to speak about or to have been a part of, but I was," he tells Sky Sports. "But I am still at the club and I want to be part of the change that takes this club back up."

McGeady is going the right way about it. He has scored 11 goals already this season, many of them spectacular. Sunderland were beginning to stutter a little during the early part of the campaign but things took a turn for the better when McGeady finally forced his way into the starting line-up in October. He has been an integral part of the team ever since. 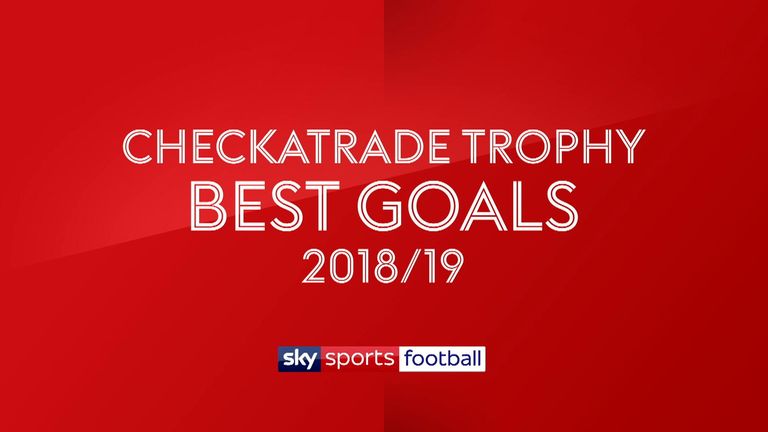 Ahead of the 2018/19 Checkatrade Trophy final, we take a look at some of the best goals from this campaign. Featuring a wonderful team goal from Man City's young stars and plenty of other great strikes from across the Football League.

Perhaps that's to be expected given his pedigree. McGeady, capped 92 times by Republic of Ireland, has spent the bulk of his career playing top-flight football in Scotland, Russia and England. Even dropping to the Championship was a step down so it would be easy for him to see League One as beneath him, but he doesn't view this challenge like that at all.

"A lot of people were telling me that League One would be easy," he says. "I'll be honest, it's not been easy at all, it's been difficult. I suppose there is a bit of a difference in terms of the quality on the ball but it's still very physical and a lot of the teams still have good players.

"There have been a lot of tough games away from home, in particular. The pitches aren't as good as what you are used to so it's been a bit of a battle. In the position I play you always get kicks but that's not surprised me because I never expected it to be a walk in the park."

Crucially, Sunderland have finally freshened things up with younger players who have embraced the opportunity of playing for such a big club at this level. McGeady is honest about the pressure to deliver and acknowledges it is "a demanding place" but he is impressed by how the youngsters have "taken to it very well" and has felt the change.

"The atmosphere since the start of the season has been completely different," he says. "A lot of players have left, there is a new owner and a new manager. It has been very positive."

Jack Ross is the manager overseeing the change and he has made a point of taking McGeady into his confidence, speaking of how much he enjoys discussing the game with him.

"I think it just comes with age and maturity," adds McGeady. "When I was younger, I just played games and didn't think about it too much. When you have a bad game, you try not to dwell on it. When you play well, you come into training without a care in the world.

It's one of the reasons why he has responded to the more analytical approach of the new manager. Ross has brought the focus that McGeady clearly feels was lacking last season under Chris Coleman.

"It has been different for me from last season when we had a different manager who approached the game differently and managed his players differently," he explains.

"This season things are very open and we have lots of discussions. There are a lot of tactical meetings about who we are playing against. There is a big emphasis on that from the manager and that's the biggest difference that I have found.

"We look at who we are playing against and how we can beat them, basically. It's about working out how to win a game of football rather than just picking a team and going out to play. It's been a good change from last season. It's been quite refreshing."

And how refreshing it would be to give the long-suffering Sunderland supporters something to celebrate against Portsmouth on Sunday. The Checkatrade Trophy was not the main target this season. That remains promotion. But nobody is underestimating what a cathartic experience it would be for Sunderland to go to Wembley and deliver some silverware.

"It has been a funny one because, while the main goal is obviously promotion, the further you go in the Checkatrade you do start to think you are getting close to Wembley here," says McGeady. "It's a final and it's the chance for us to win a trophy and so this is a day that everyone at the club can look forward to. You can never turn your nose up at that.

Watch Sunderland in action against Portsmouth in the Checkatrade Trophy final live on Sky Sports Football from 2.15pm this Sunday