Crystal Palace fans hung banner outside the training ground accusing the club of a lack of apathy following defeats to Leeds and Burnley; In an open letter to the club, fans group Holmesdale Fanatics slammed Roy Hodgson's "spineless, defensive tactics" 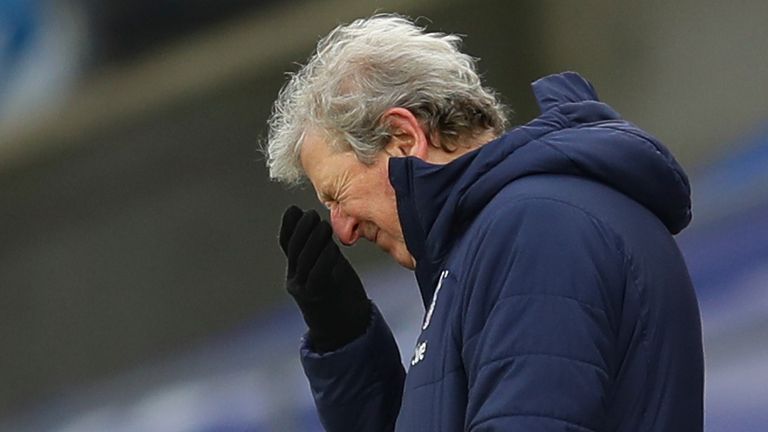 Crystal Palace boss Roy Hodgson says the difficult period his side is currently experiencing happens to all teams at some point in the season.

Roy Hodgson says criticism of Crystal Palace's recent performances is to be expected but denied supporters' claims the club lacked pride and ambition.

Following back-to-back defeats against Leeds and Burnley, Palace fans hung a banner outside the club's training ground, which read: "Palace pandemic of apathy. Change this mentality. Restore the pride, ambition and vision."

One supporters group, the Holmesdale Fanatics, also wrote an open letter to the club, accusing Hodgson of "spineless, defensive tactics" and calling for a re-evaluation of the club's long-term vision.

Last Saturday's 3-0 loss at home to Burnley saw Palace drop to 14th in the Premier League, 10 points above the relegation zone.

Asked about the banner, Hodgson said: "I didn't see it, I don't think it was up for very long. I heard about it. It's not something that you can encourage.

"Our fans have been very good through the years so for them to do something like this is not something that one can be happy about.

"When you give a couple of performances like the last two, which have been way below what we expect of ourselves, you expect the fans to react and be critical of the performances.

"I would deny, of course, that it's a lack of interest or desire on the part of the players.

"We can't deny that we haven't played well enough to get the results in the game but that's a fact of life.

"I see every day here on the training field how hard people work and how much they do want to do well.

"Of course, when it doesn't go well I'm afraid you open yourselves up to all sorts of criticism of that nature."

'Even Pep and Ole go through this'

Hodgson says pressure is just part of the job and highlighted the importance of "perspective", arguing that his players were being praised just over two weeks ago after victories against Wolves and Newcastle.

"At the start of the season, Pep Guardiola was being questioned because Manchester City were lying 14th in the Premier League," Hodgson said. "Ole Gunnar Solskjaer at Manchester United has gone through several periods.

"This is something that happens all the time in our walk of life. I think it's important that we, as managers, keep things in some sort of perspective. 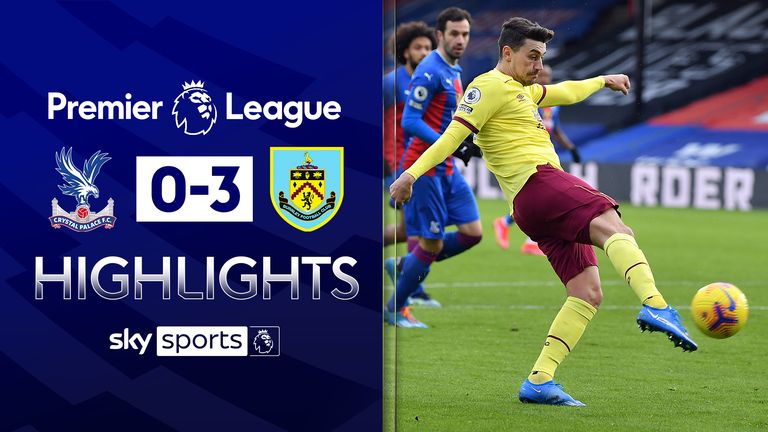 FREE TO WATCH: Highlights from Burnley's win against Crystal Palace in the Premier League.

"It's also important that we don't listen to, or take note of, every single criticism but some of that won't ring true to us.

"After the results against Wolves and Newcastle the mood was positive, the criticisms were non-existent and a lot of praise was coming the players' way.

"I don't believe that in two weeks and two performances everything has changed to that extent.

"We aren't in a desperate situation in the league, which is something positive, and in the meantime we much accept that fans have got a right to their opinion and to feel upset."

Hodgson is hoping for a response from his players when they travel to face rivals Brighton on Monday, live on Sky Sports.

Graham Potter's side are just three points behind the Eagles after going unbeaten in their last six league games.

"Whatever team we'd have played after the last two results where we've been below par, we'd have been anxious to show that we're better than that and have more in our locker than we were able to show," Hodgson said.

"The fact that it's Brighton adds extra spice because it's a game that's very important to our fans. Everyone at the club is very much aware of that.

"It's a good opportunity to get out there and show that the last couple of performances are not what our fans can expect from us."