Daniel James moves to Leeds United in a permanent deal, two years after the Wales international almost joined the club before moving to Manchester United; Cristiano Ronaldo's return to Manchester was set to impact James' minutes at Old Trafford; he will wear No 20 for Leeds 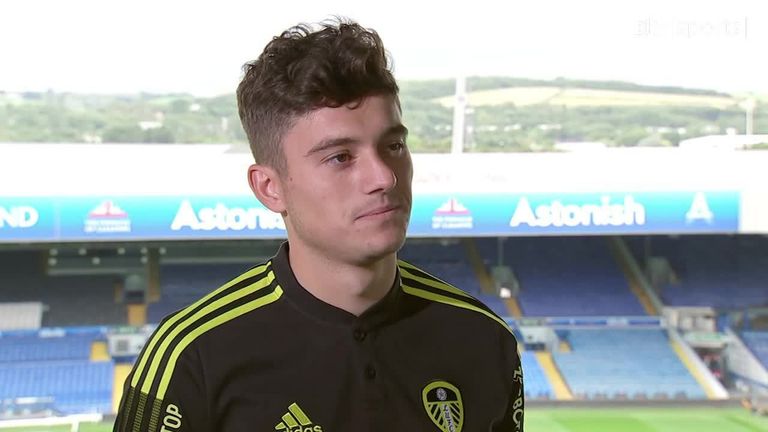 Having almost joined Leeds in January 2019, Daniel James has now been signed by the Yorkshire club - and says he can't wait to run out in front of the Elland Road faithful

Leeds United have signed Daniel James on a permanent deal from Manchester United for £25m.

James underwent a Leeds medical on Tuesday ahead of flying out to Finland with the rest of the Wales squad for an international friendly.

The 23-year-old winger started two of United's first three Premier League matches of the season, including Sunday's 1-0 win at Wolves.

📞 The call has been answered! pic.twitter.com/u9j9YG5FUT

However, the return of Cristiano Ronaldo to Old Trafford pushed James down the pecking order, with Leeds stepping in to buy the forward who almost joined them before signing for United in 2019.

James, who will wear the No 20 shirt at Leeds, spoke exclusively to Sky Sports News as the move was announced, saying: "It feels great to be here, just glad everything is over the line now and just excited to move forward.

✍️ #LUFC is delighted to 𝘧𝘪𝘯𝘢𝘭𝘭𝘺 confirm the signing of Dan James

"It has been a bit of a whirlwind for me, bit of a crazy time [the last 24 hours]. But as I said, I'm grateful for the club still being interested in me and still believing in me from that time [when they nearly signed me] two-and-a-half years ago.

"I'm happy to be here now, and I can't wait to play in front of these fans.

"I think there has always been interest in me from Leeds since I nearly signed from Swansea.

"I think as you said, there wasn't much going on [this window], it kind of happened in the last day or two. It happened very quick, but I've got my head around it and this is where I want to be moving forward.

"It feels brilliant to be here. Last time I had signed everything, but obviously it fell through at the last minute. Everything I've done today feels like déjà vu, it feels like yesterday. In football terms, everything moves so quick.

"I'm delighted that everything is over the line now, and obviously I've got an international now, and then I'm looking forward to getting back and playing that first game back against Liverpool."