Nottingham Forest remain keen on signing Aberdeen defender Scott McKenna, despite the player flying to Croatia for the Dons' Europa League tie against Rijeka on Thursday.

Forest have had two offers for the Scotland centre-back turned down in this transfer window but hope to complete a deal before Thursday's 5pm deadline. 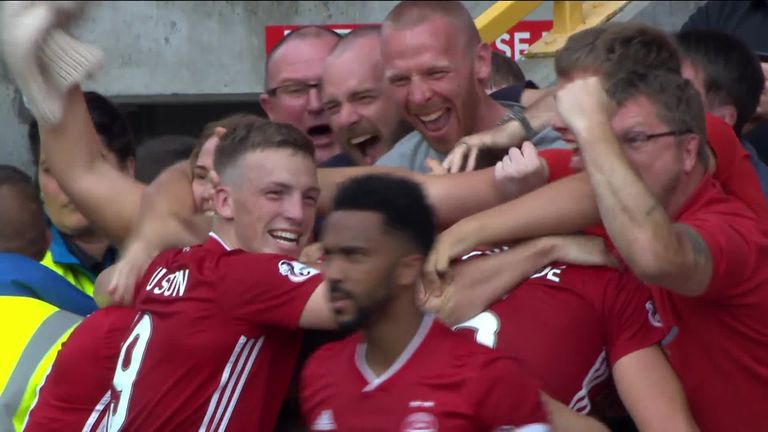 Highlights of the Scottish Premiership match between Aberdeen with Hearts

McKenna submitted a transfer request on Saturday which was rejected by Aberdeen and he subsequently played in Sunday's 3-2 win over Hearts.

The Scottish Premiership side are understood to value McKenna at around £7m and are unwilling to sell the player unless that valuation is met.

But Aberdeen manager Derek McInnes insisted McKenna remains their player and expressed concern at how other clubs behave in respect to their players during the transfer window.

"Nothing has changed with Scott and unless someone tells me differently, Scott is playing [against Rijeka on Thursday]," he said.

"There's a degree of anger against clubs who are showing no consideration whatsoever about Aberdeen."

McKenna played 39 times in all competitions for Aberdeen last season and has featured in all of their games to date in the current campaign.

Sam Cosgrove scored a hat-trick as Aberdeen sealed their place in the third qualifying round of the Europa League with a 5-0 win over Georgian side Chikhura Sachkhere.